Once again, the balance of power in the Big Eleven Ten lies in ruins. Once again, the Ohio State Penitentiary University starts a campaign highly-ranked, only to suffer a big early season loss. Of course, these shifts in the balance of power occur because tOSPU dominates the Big Eleven Ten landscape in much the same way Germany dominated Europe in the 40s.

"I do not want to hear anymore about the one they call 'The JoePa!'"

It is this dominance that keeps the rest of the conference over-rated and under-performing. It is this dominance that ensures anybody winning the conference must do so by conquering Columbus, and if that conqueror has national championship aspirations, their conquest must be visited upon the vanquished by the jaws of the most savage of the dogs of war.

Why the need for such savagery? Because history has taught us that the evil used in the construction of a despotic monolith such as the Buckeye Reich is matched only by the evil required to destroy it. While Aldous Huxley said the charm of history and its enigmatic lesson consist in the fact that, from age to age, nothing changes and yet everything is completely different, it was Quentin Tarantino who showed us just what sort of brutality should, nay, must be rained on the Buckeyes.

September, 2009. Southern Cal has just inflicted a major defeat on the Buckeye Reich, establishing a beachhead in Buckeye-occupied Ohio. Now, a guerrilla band comprised of those who have suffered at the hands of the Buckeyes are roaming the Reich exacting their vengeance.

“All right people, listen up. You have been selected for this detail because like me, you hate the Buckeyes. When you join this detail, you incur a debt payable to me. Every member of this detail owes me 100 Buckeye scalps; and I want my scalps.”

“So, what are you going to do with that Buckeye uniform once this game is over? I suppose you are going to take it off?”

(Terrified; eyes fixed on the blade inches from his face) “Yes…yes sir, I will take it off. I will even burn it.” 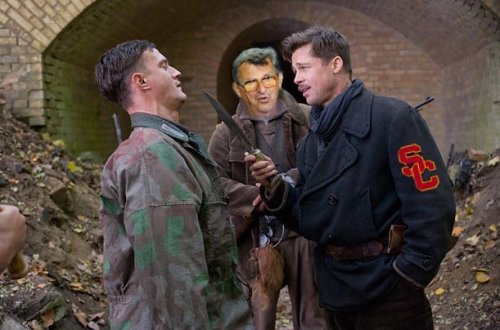 “Now, see, I just can’t abide by that. See, the good thing about a uniform is that it tells you right away who the Buckeyes are. Without it, no one may ever know you are a Buckeye. So, I’m going to give you something so that no matter what, we always know just who you are (carves OSU logo into captured Buckeye’s forehead). Now, we’ll know just who you are for the rest of your Buckeye-suckin’ life. I want you to go back and tell all the other Buckeyes just what you saw, and just who did this, and what’s gonna happen to them.”

Southern Cal’s victory over Ohio State on Saturday sets the table for Penn State to roll through the Big Eleven Ten much like Patton did across France in 1944.  But there’s a problem. Coupling Ohio State’s dominance over the conference in the past few years only to be served up bowl-style like so much milk-fed veal with the Big Eleven Ten’s abysmal record of late in bowl games and against non-conference opponents means any team with national championship hopes coming from this conference needs to do whatever it takes to boost its poll ratings.

Hence, the need for savagery.

Ohio State’s loss to Southern Cal sets up the clash between the Buckeyes and Penn State in Happy Valley in November as the de facto Big Eleven Ten championship game, complete with its BCS trappings. Add to this the chance that Penn State could arrive at this affair undefeated, and suddenly the Nittany Lions are front-runners for the national championship.

But in order to blunt some of the criticism of the Big Eleven Ten, Penn State needs more than to just beat Ohio State. After the game, the Nittany Lions need to march on the Buckeye Reich, leaving nothing in their wake but blood-spattered rubble. They must salt the earth of Ohio Stadium so that no Buckeyes ever grow again. They must drink the sweet wine of victory from the hollowed-out skull of Jim Tressel; the rest of the carcass hung from the goalpost as a reminder of who unleashed this reign of destruction.

But the pillaging must not be limited to the Buckeyes. To counteract the soft reputation of the conference, every Saturday from here on out must be an atrocity of heretofore unimaginable proportions, like an eight-dicked fire-breathing demon with every known sexually transmittable disease raping a baby seal on a pile of skulls in an orphanage. If they are ahead by 40 points with 30 seconds left, they should throw deep. Then they should go for two. After that, they should on-side kick and throw deep again. Tarantino captured this perfectly with the “baseball bat” scene in Inglourious Basterds. JoePa must assume the role of “The Bear Jew,” swinging until molars, bicuspids, and eyes litter the ground, and when there is no skull left kicking ribs until the whistle blows.

Somebody’s going to have to call “The Cleaner.”