Favre-Gasm – The Four-Towel, “Sorry It Got On Your Face” Edition

What is going to happen Tuesday on the sports radio stations in the Twin Cities makes me almost sorry I used the term “full-throated” to describe previous Favre-gasms. Viking fans can’t contain themselves with the excitement over their win Monday night. What is happening right now on the local post-game radio show will continue through the night, building like a tsunami of purple passion until it does what tsunamis do; breaking on the shore in an orgy of writhing, frothy waters; the excitement of the event cloaking the devastation until the day breaks and you realize you are waking up next to the Muppet-Shrew Suzy Kolber.

Face it, she's only hot if you are in your 50's married to a woman that has an ass like a bag of wet clothes.

With this victory over his former team, King Brett I becomes the only quarterback in NFL history to have notched a “W” over all 32 teams. Never mind that he beat a team from a city that still has a street named after him. Never mind that he did it in a stadium on a street named for a baseball legend. In fact, being a Viking fan lately means to play the “head in the sand” game on a lot of things when it comes to getting your Favre-gasm.

I will be the first to admit that Favre had a big-time performance against the side that made him a household name. Who can argue with completing 24 of 31 passing attempts for 271 yards and three touchdowns? In a word, me. Why? In a word, history.

Viking fans are the epitome of frustration; they’ve never gotten to the peak despite more chances than most franchises. The older fans remember the four Super Bowl losses. All their fans recall 1998; the 15-win season that saw the Purple set the single-season scoring record, only to have their ball kicked away by Falcons kicker Morten Andersen in overtime of the NFC Championship game. It is this frustration that brings the Favre-gasm to its now tsunami-like levels.

Viking fans want more than anything to win. That want is only exacerbated by the fact that their main rival has more NFL Championships than anybody; the new purple-clad hero being the catalyst for Green Bay’s most recent win. That want is so blinding it has completely blinded them to a few important facts, all of which have history behind them.

Let’s start with history itself. What do John Elway, Kurt Warner, Trent Dilfer, Tom Brady, Brad Johnson, Ben Roethlisberger and both Manning brothers have in common? They have all won at least one Super Bowl since the last time King Brett I did it. Favre hasn’t taken a team to the promised land in 13 years, and the last time he had a shot at it he gave a performance more reminiscent of Brett Somers than Brett Favre. 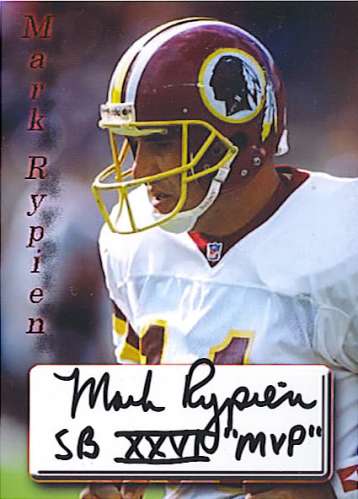 You totally forgot about this guy, but he has as many Super Bowl rings as Favre.

Even more recently, Favre’s season with Jets started with all sorts of promise, capped by a dominating six-touchdown performance in Week 4. But, just as he has been prone to do in each of the last four seasons, he faded down the stretch; more often than not looking like an over-matched high-schooler rather than a first-ballot hall-of-famer.

In other words, Vike fans, history suggests you’ve just seen the peak, and all the Enzyte and Viagra in the world isn’t likely to get you that February Favre-gasm you really crave.

One comment on “Favre-Gasm – The Four-Towel, “Sorry It Got On Your Face” Edition”

This entry was posted on October 6, 2009 by J-Dub in NFL and tagged Brett Favre, Minnesota Vikings, NFL.