Since it seems the college football world is about to undergo the tectonic shift of conference re-alignment we’ve all been waiting for, it may be time for us here at Dubsism to introduce you to a conference and its members with whom you may not be all that familiar.

When it comes to the Pac-10, everybody has seen USC; after all, it is the only team in the conference folks on the East Coast will stay up past 10 p.m. to see (well, maybe not now since the Trojans are about to get clipped, but that’s another story). While the fan bases of this conference are exceedingly loyal, those fans are going to see teams on their schedules in the near future of which they likely will know absolutely nothing.

Luckily, there is a way to prevent such a tragedy. All sports teams have a personality; we here at Dubsism intend to enlighten those of you possibly  dawning a new era by comparing a team which you may know little about to a better-known entity; in this case characters from the popular sit-com “Scrubs.”

Trojan football has been at the top of the Pac-10 food chain since the dawn of time, and they are going to be there for just as long.  See, Sacred Heart Hospital has the policy about retiring administrators at age 65, not the Pac-10.

Even after the NCAA exacts it’s pound of flesh for the whole Reggie Bush fiasco, USC will be around forever, much like Bob Kelso will always be the Chief of Medicine as long as re-runs exist. Like “Beelze-Bob,” USC has been there forever, Cal thinks they are Satan incarnate, and you could envision them getting a “Shanghai Surprise with a Happy Ending” and making you watch.

Nobody talks better than Cal…or Cal fans. Nobody can review the short-comings of everybody else, all while failing to see their own anger-management issues or borderline alcoholism. They’re just smart enough to be sarcastic, and just animated enough to be funny without being obnoxious. However, at the end of the day, they usually still have to deal with Kelso, but every once in a while, this happens. 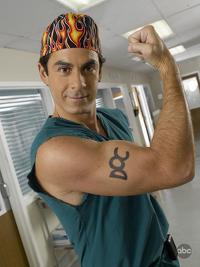 Let’s be honest…Arizona State is a party school; it always has been, and it always will be. But party schools serve just as important a function as do the Harvards of the world, if not more so. You expect things from Harvard grads, but somebody has to matriculate the next purveyor of the “Miracle Five.” After all, do I really care if the guy who saved my life can summarize Proust?

What else can say you about a school whose nickname is the Cardinal, and its mascot is a tree? If there is a rule, it is that your mascot should match your nickname. People in the Bay Area should know this better than after the San Francisco Giants tried to infuse Candlestick Park with some foam-rubber based enthusiasm in the form of, no, not a giant, but a giant crab.

Who the hell else would make the leap between a giant and a crustacean whose main lot in life is to be dunked in melted butter? The same people who would be delusional enough to connect cardinal red with an evergreen tree.

This is why JD represents everything that is Stanford…he’s smart, he’s nerdy, and he has internal monologues that in non-smart people are usually referred to as delusions. While most Stanfordians secretly wish they could be Dr. Cox, more often than not they have this effect. If you don’t believe, the proof is just a click away…

For a while there, between Karl Dorrell’s firing and the rise of Barack Obama, Turk held the title of whitest black man in America, if for no other reason than it’s whiter to be a surgeon that a fat TV guy (yes, Bryant Gumbel, that was aimed at your 275-pound caramel-colored candy ass).

This, amongst other reasons, makes Turk the quintessential black L.A. professional. First of all, none of his friends are black. Think about it; when’s the last time you saw Turk hangin’ wit’ Snoop Dog Resident or Leonard, the hook-handed security guard (well, I give him a pass on that one because, honestly, who wants to hang out with a security guard?)

Second of all, his best friend is white, and he’s proud of that.  But for the biggest qualification…Turk is not married to a black woman. We’re still not brave enough in America to let him be married to a white woman on television, but Latinas are A-OK, which is why Carla is Puerto Rican Mexican Illegal Dominican.

University of Arizona – The Janitor 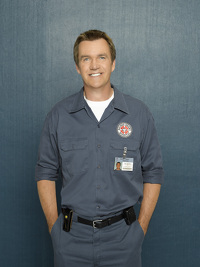 If you’ve ever been in a place like Quartzite, Arizona, you know towns in rural Arizona only have three things:

So, who better to represent the rural residents of Arizona than a guy who seems crazy enough to live in a sheet-metal box in the desert and invent things like the “Knife-wrench?” Let’s face it…the way you get that special kind of crazy is to live in a trailer under a steady stream of intense solar radiation, with enough time to allow the cerebral softening needed to concoct shit like the “Drill-fork.”

And face it, Arizonans…we all know you are cracked, otherwise, you would have never given us Evan Mecham. 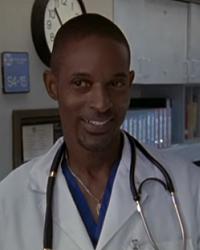 Autzen Stadium has become the epicenter of being black in the Pac-10. The Ducks are usually laden with talent, yet they can’t get any respect. The “man” is always keeping them down; the Dennis Dixon-led team of a few years ago was the first in the conference to enjoy any level of success with a black quarterback since the Rodney Peete-led Trojans. And don’t even get me started on what happened last year when LeGarrette Blount got disrespected.

Sure, Oregon may be one of the whitest states in the union, but the Ducks know how to get their groove on. Sadly, the only team who gets their struggle is Dr. Kelso. 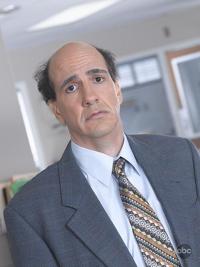 Where is the irony in the fact that Oregon State would get the pick as the creepy loser, considering the fact that the team name is the Beavers, and yet these guys couldn’t get near a beaver with an arsenal including 18th-century French-Canadian trappers and a suitcase full of rohypnol?

But, let’s be honest…orange does illicit hostile behavior, even in those forced to wear UCLA blue…

Husky football throughout history has been the uptight, hot blond of the Pac-10.  They have been competent enough generally to be successful; even finding their way into private practice. They are hot enough to make you want to see them naked, but they somehow find a way to make the experience of de-clothing the easy hot blond less than satisfying. That pretty much makes UW “Purple and Gold” medal winners in “moment killing.”  (Aside: note Turk/UCLA’s Neil Diamond impression…yet another log on the “black guy who is really a white guy” bonfire if you ask me, but I digress).

Washington perfects moment killing by being annoying in that special way only really bound-up white chicks can do. College football teams do this by looking like a winning team, then failing to cover the spread EVERY FUCKING TIME you bet on them. In other words, you find yourself at the end of the day asking “Why couldn’t they be married to Dr. Cox?”

One of the beautiful things about “Scrubs” is that it accurately reflects the social strata of a hospital. The sad truth is that in the medical caste system, there is only one guy who ranks below the security guard; and it takes a trail of corpses to do it.

Enter Doug Murphy. He cowardly hits dead guys with fire extinguishers. He may have killed more people than a CIA agent. He may need to be sealed “airtight” with baby carrots. In fact, much like Doug, Washington State only gets sarcastic “respect” when the upper-classmen of the Pac-10 are making fun.

See Also: Understanding the Conference That Was The Big 12 Through a Comparison to Stuff in My Kitchen