Every athlete has a moment when they have to make some decisions.  That moment is now for Florida State quarterback Jameis Winston.  The first decision he needs to make is obvious.

Will he or won’t he enter the 2015 NFL draft? Winston is now three years removed from high school, which makes him eligible to enter the NFL Draft.  As of yet, Winston has not made it clear which way he is going, although

It’s still unclear whether he will choose to go to the NFL.  After the debacle in the Rose Bowl against Oregon, Winston said he’s focused on playing baseball and the next FSU football season. If he does stay at Florida State, that will be yet another in a long line of bad decisions he’s made.

Jameis…declare your intention to enter the NFL Draft. Do it today.

For all you Florida State shitheads out there who have sent me some of the best hate mail I’ve ever received, let’s make something perfectly clear. I’m not anti-Jameis; I’m anti-stupidity and anti-Florida State, and unfortunately, those two things seems to go hand in hand in Tallahassee. 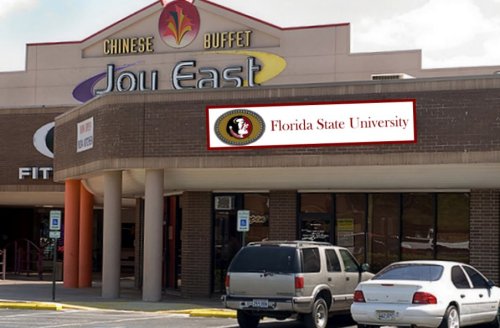 Let’s cut right to the chase here. Florida State is the strip-mall of universities, and it’s pretty clear the culture in the athletic department is as diseased as anywhere in college sports could be. That’s why Jimbo Fisher was the hand-picked successor to Bobby Bowden; he’s embodied everything Bowden did when it came to covering up bad behavior by his players. That’s why Winston needs to load his car and get the hell out of there…today. 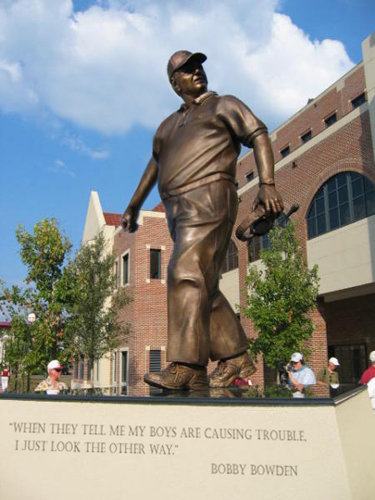 Five days ago, we watched Winston and Florida State have a meltdown of epic proportions. The biggest problem with that is everybody saw with their own eyes how Winston handles adversity, and he needs to take a crash course in dealing with the tough times because no matter what, his athletic career is headed for the lean years. He’ll never get that lesson in Tallahassee, so it is time for him to close that chapter of his life.

Like it or not Winston fans, that “Garo Yepremian” moment and the Jimbo Fisher admonishment “if you don’t calm the fuck down, you’re going to the bench” were the last straw in the eyes of many NFL scouts in terms of Winston’s draft stock. That stock has plummeted all season long as Winston has managed to showcase all his flaws which will kill him in the NFL. Fixing that starts today, and to do it means doing some other things besides getting out of Tallahassee.

First, find a mentor.  No matter which direction Winston’s athletic career goes, like I said the lean times are coming and it’s clear he has no idea how to handle that. If he sticks with baseball, he needs to understand he’s a long way from being a big-leaguer, and that for the immediate future, playing baseball means the doldrums of the low-minor leagues. As far as football is concerned, the future there consists of likely being drafted by a bad team in need of a quarterback. That means he needs to know how to handle going from Heisman winner and National Champion to being 4-12 and the object of harsh media treatment in some NFL dumpster fire.

Right now, Winston is on track to be little more than “Butt Fumble II.”

Secondly, speaking of baseball, he needs to drop that thought entirely. On the diamond, Winston is a lot of potential without a lot of real talent to back it up. As a pitcher, he is rumored to have a 90+ mile-per-hour fastball, but he lacks control and doesn’t have another pitch he can routinely throw for strikes. I’ve seen him try to throw a slider, and it’s light-years away from being a pitch that would scare major-league hitter. From the offensive side, while Winston is a switch-hitter, he is seriously under-developed in his approach at the plate. His swing is much like his throwing motion; it’s long and has a big loop in it. He’ll need to fix either one of those things to succeed at the next level in what ever sport he chooses.

Since he needs to fix things in either sport, he really needs to concentrate on one. Baseball is a much more difficult sport to make up lost time, because success in baseball is far less about raw athleticism then it is about refined skills. In either sport, Winston is all about pure athleticism, which will take him much father in football then it will in baseball. Most major-league scouts don’t  see Winston as a prospect as a hitter simply because he will continue to fall behind his contemporaries as he splits his time between baseball and football.

Then there’s the money.  Winston’s earning potential as a football player will clearly outstrip that of baseball.  With the current draft rules limiting baseball teams’ spending, it’s hard to envision him playing professional baseball, because as a potential  top 10 pick in the NFL draft, he would likely net a guarantee of more than $10 million.

Lastly, Winston desperately needs to hire a quarterback coach. A guy like George Whitfield could do wonders for Winston. As I’ve said, Winston’s success at the college level has been based on sheer athleticism. But in the NFL, his big, slow delivery, his inconsistency, and his decision-making will be a big problem.  In many ways, Winston has the same problems athletically as Tim Tebow did. Tebow’s downfall was his inability to throw the football consistently, and that’s exactly what will happen to Winston if he continues to miss wide-open receivers and throw into double and triple-coverage.

While it may be true that Winston loves baseball and he has two more years of eligibility, it’s time for him to put his best foot forward, leave Florida State, forget about baseball and focus on preparing for the NFL Scouting Combine, his Pro Day workout, and generally prepare for a career in the NFL. Otherwise, he is going to be just another in a long line of Heisman trophy winners who failed on Sundays.

Look at the big guy in the middle. Who knew Andre The Giant was part of the classic prog-rock band Kansas?
Apparently, that Global Warming thing is real. Break out the sunscreen for Wednesday!
You can have your own Christmas concert because WE'RE NOT GONNA TAKE IT!