Pete Carroll and Darrell Bevell’s Other Play Calls Throughout History 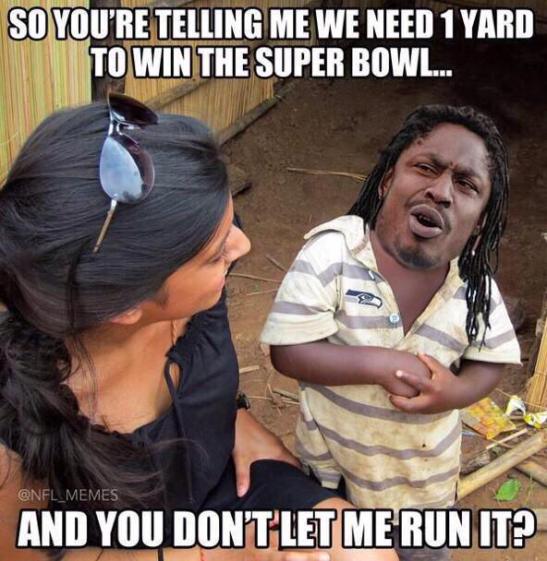 Ok…as we wade through the aftermath of last night’s Super Bowl, it must be pointed out that in my nearly half century of football fandom, Seattle Seahawks’ head coach Pete Carroll and offensive coordinator Darrell Bevell’s decision to throw the goddamn football from the 17-inch line with the Super Bowl on the line when they had one of the most dominating goal-line bulldozer running backs in the history of the fucking game is just beyond belief.

But then again, look at who made this decision. In the love-fest that has been happening in the Pacific Northwest in the last few years, everybody forgot about what Pete Carroll can do in close games. He was a miserable failure coaching the New York Jets, but to be fair, not everybody can rise to the levels of greatness usually reserved for legends like Walt Michaels and Joe Walton. Carroll’s single season in New York was such a disaster that the Jets replaced him with Rich Kotite. Let that sink in for a moment…Rich Fucking Kotite.  The New York Jets actually thought a guy who was notorious for declining a penalty just so he could punt was a better option than Pete Carroll.

Carroll’s tenure in New England was only slightly better, where Carroll took a play-off caliber team all the way to mediocrity.

As far as Darrell Bevell is concerned, I can tell you the high-light from his career as a player.  You have to set the Wayback Machine to 1993 at the University of Wisconsin.  Bevell is a 73-year old quarterback for Barry Alvarez’ Badgers because he went on a Mormon mission before attending college. Bevell is part of a team that lifts the moribund Wisconsin program from the dungeons of the Big Ten to their first Rose Bowl berth in 30 years and their first win ever. The key play in that game came in the fourth quarter when Bevell (whose scrambling ability was reminiscent of horse with a broken leg running in wet sand) lumbered 21 yards down the left sideline for a game-sealing touchdown.

He’s been afraid of the run ever since.

Once you understand both of these guys, and you hear the logic behind their decision to throw the ball, it becomes easy to see that Carroll and Bevell were actually behind some of the worst decisions in history.

See, if you’d known that last night, you wouldn’t be so shocked this morning.