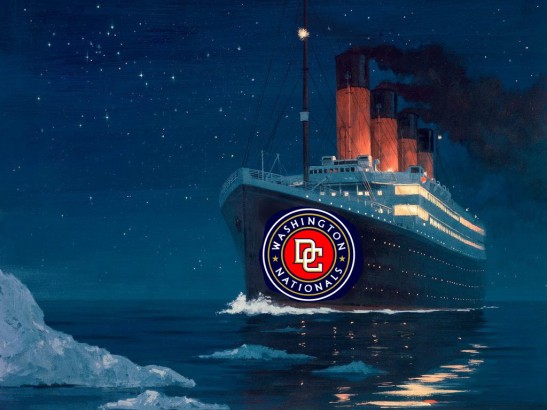 March seems like so long ago.  That was the month when we all thought the Washington Nationals were just about to begin a “Sherman-through-the Confederacy” style march through the National League?  There’s no wonder it was a popular opinion.

In March, the Nationals were coming off a 2014 season which saw them notch 96 wins.  One of the reasons why they did that was a killer pitching staff, to which in March they added mound mauler Max Scherzer.

But then the Nats got off to a terrible start in 2015; they were 7-13 on April 27 and 8 games out of first place, trailing a New York Mets team which none of us believed could stay in the race for the long haul. After all, the classic refrain universal in baseball came out…”It’s early.”  That refrain held water for a while, especially when the Nats started methodically winning; everything seemed as if it had fallen into place.  Set your “Wayback Machine” for July 5, when the Nats dominated the San Francisco Giants and moved to 10 games over .500.  Then, they were enjoying a 4.5 game lead in the National League East, and it finally looked as if the 2015 Nationals were finally the team we all envisioned.

Then came the All-Star break.  Since then, the Nats are more like the Gnats, struggling to maintain a .333 winning percentage.  They are treading water around the .500 mark and it’s beginning to look like catching the Mets might be a taller order than the Washington Monument.  The top of the Wild Card might as well be Mt. Everest.

Boil it all down to gravy, and what you get is yet another Nationals team which is poised to under-perform.  The Nats threaten to stop treading water, and start taking it on.  If they sink, they will be just another high-payroll, low-result team.

So…just what the hell happened? 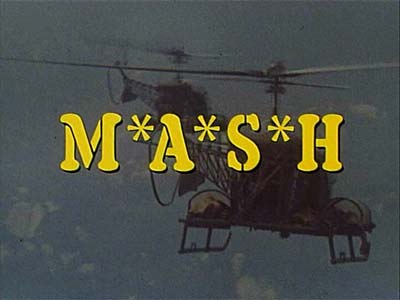 Cliché as it may be, the Nationals are one “Hawkeye” Pierce reference from being an Army field hospital during a war.  You’d have to go back to the British Army during the Battle of the Somme to see a casualty report as long Washington’s.  Denard Span, Stephen Strasburg, Anthony Rendon, Doug Fister, Jayson Werth, Ryan Zimmerman, Reed Johnson, Nate McLouth, and David Carpenter.  That’s just for starters, and many of those names have made the list multiple appearances on the disabled list.

More importantly, this is the time to focus on last year’s arguable MVP, Anthony Rendon.  As of this writing, he has logged less than 200 total at-bats, during which he has seriously produced below the standards he set in 2014.  Not to mention, the injury bug hasn’t been limited to the position players.  The Nats have seen less than 170 innings combined between from Doug Fister and Stephen Strasburg, and those innings have been significantly worse than expected.  Remember when the worry in Washington was that  Tanner Roark was doomed to a life in the bullpen because of a rotation loaded with potential aces? Now Roark is one of nine pitchers to start for the Nats due to injury, inadequate performance, or both.

The heart of the offense of this team (not including Bryce Harper, whom I will address later) is Anthony Rendon, Ryan Zimmermann, and Jayson Werth.  They’ve been in the line-up together exactly six times this season. Six.  So, if you were wondering why the Nats have pumped over 300 at-bats into the likes of  Dan Uggla, Matt den Dekker, and Tyler Moore, now you know.

Oh, by the way, Tyler Moore just joined the casualty list; the Nats just placed him on the 15-day disabled list with a left ankle sprain.

2) Even the healthy guys aren’t producing. 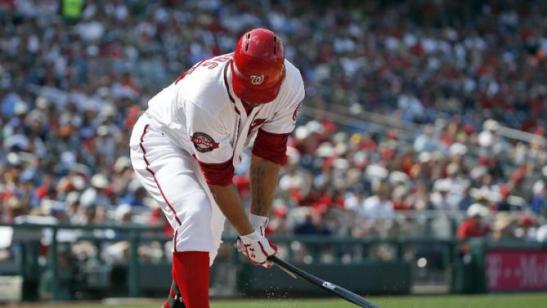 Despite what I just said, the Nationals can’t use injuries as an excuse for what is happening in Washington.  Yes, I know I’ve already mentioned Ryan Zimmermann and Jayson Werth as far as being hurt, but even when they’ve been healthy, they are two of the main culprits when it comes to Washington’s complete lack of production from “bat-first” positions, especially first base and left field.  In 2015, Nationals first basemen have combined for a “slash” line of  .221/.282/.399.  In comparison, the average big-league first sacker produces more along the lines of .259/.336/.450.  When it comes to left fielder production, the Nats are chugging at .226/.296/.320 ; the MLB average is  .256/.320/.406.  That’s waaaaay too big of a difference not to have a serious negative impact.

Beside Bryce Harper, the Nats only have one other player now on the active hitting over .300 – Yunel Escobar.  After that, for guys with more than 200 at-bats, the numbers get scary.

It may very well be a blessing in disguise that Jayson Werth only has 181 at-bats, considering he’s only hitting .193. 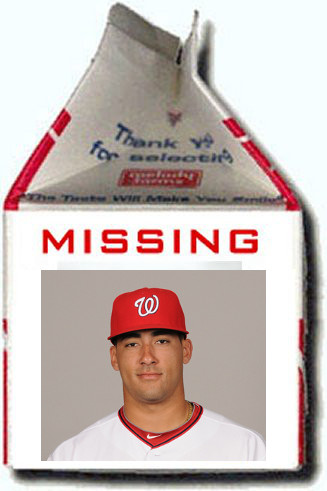 More “slash” line goodies here…Between 2012-14, the Nats’ shortstop batted a combined .275/.326/.462 with three Silver Sluggers and 26 homers per 162 games played. This season, Desmond’s numbers have plummeted to .229/.275/.385.  Also, let’s not forget that Desmond’s defense has taken a tumble as well.  There’s a reason why the Nats’ just called up their “phenom” shortstop prospect Trea Turner.  Desmond has always been a guy on the cusp when it comes to the future plans of the Nationals, and now it seems pretty clear he has played his way on to an off-season train out of town. Desmond is getting $11 million this year, after which he is an unrestricted free agent.

Washington offered Desmond a six-year extension last year reported to be worth between $80 and $90 million.  He probably should have taken that deal; meanwhile the Nats know they dodged a bullet.

4) The one guy who was producing isn’t anymore. 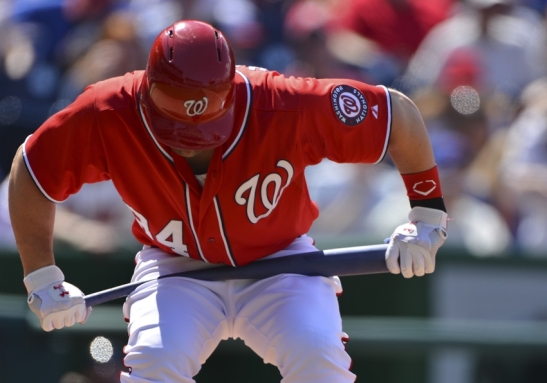 Last year, I saw an article proclaiming that MLB players think that Bryce Harper is the most overrated guy in the game. At first, I was dismissive of that poll, and I especially didn’t put any stock in it considering the numbers Harper was putting up earlier this year.

My life-long disdain of the Los Angeles Dodgers led me a long time ago to coin a term…”the next great Dodger hitter.”  This was in response to the media crowning a guy in the minors to be the next Dodger superstar, only to watch that guy underperform.  This list of “next great Dodger hitters” is long, but the most recent example was James Loney.  First base had been a weak spot for the Dodger since Steve Garvey (don’t even start your Eric Karros bullshit with me...), and James Loney was supposed to end all that. He was going to win a gold glove, a triple crown, and walk across a lake to heal an injured swan.

Instead, he became “the next great Dodger hitter,” meaning he consistently didn’t hit 30 homers, didn’t bat .300, didn’t drive in 100 runs, and didn’t score 100 runs.  This is the season Bryce Harper finally will break some of those barriers; as of this writing in 113 team games, he has 30 HR, 73 RBI, a .330 batting average, and 84 runs scored.  The trouble is the vast majority of that production happened in the first half of the season.  Since the All-Star Break, in 31 team games, Harper has 4 homers and 12 RBI.  More importantly, if you take away the first 81 games of 2015, Harper’s career numbers start looking a lot like those of  James Loney.

That begs a question.  Were the first 81 games of 2015 representative of Harper’s true potential, or were they an anomaly? To be fair, there’s precious little in the Washington line-up to protect him right now, but to be even more fair, Harper had his best game of the year (3 HR, 5 RBI) on May 6th against Miami with the non-existent Ryan Zimmermann hitting behind him.

Here’s the worst part if you are a Nationals fan.  Next year, general manager Mike Rizzo will have to make a decision.  Harper is a free-agent after 2016, and if the Nats find themselves in another under-performing season, could Washington be in a position to trade “the next great Nationals hitter?” 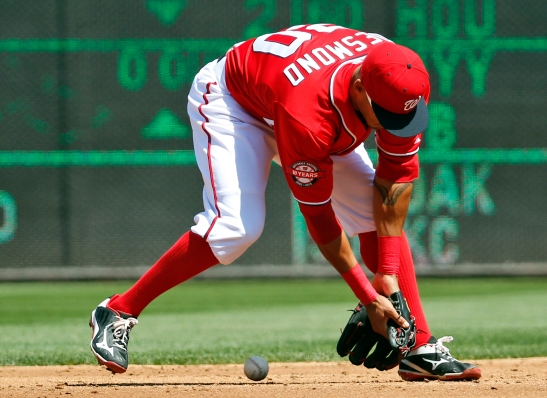 …And the Nationals can’t.

Just wait, it gets worse.

Normally, I don’t pay attention to that numeric voodoo known as Sabremetrics,  but in this case, some of those numbers really do tell a story.  Washington ranks 13th in the National League in Defensive Runs Saved, 10th in Ultimate Zone Rating, and 12th in Defensive Efficiency.  Wheteher you like crunching numbers or not, the bottom line is the Nationals couldn’t catch a cold, let alone a baseball.

6) They waste the precious few base runners they actually get. 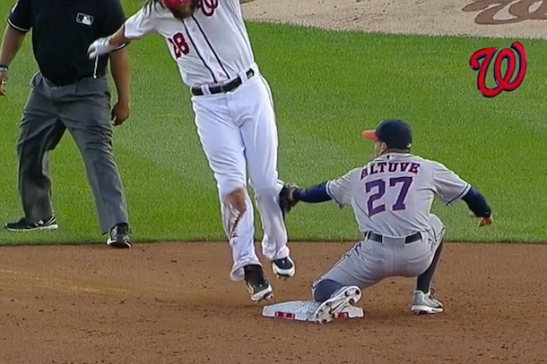 Some would consider this to be down on the list of what is wrong with this team, but I watched the San Francisco Giants win three World Series by manufacturing runs when their lack of lumber made that a necessity.  That’s exactly where the Nationals are right now; when you can’t drive in runs,  you have to maximize each base runner you get.  The Nationals don’t seem to grasp that concept; they are eternally waiting for the three-run homers which simply don’t come.

Here’s more story-telling numbers.  The Nationals rank 10th in the National League in base-running runs above average, 12th in percentage of extra bases taken, and 13th in stolen bases.

You guessed it…here’s where we give the “rubber glove” exam of the pitching staff. There’s a lot of numbers for this staff which aren’t where they should be,  but the real key lies in how bad the Nationals are when the opposition has runners in scoring position (RISP).

Most statisticians will tell you that all pitching staffs are somewhat degraded in RSIP situations.  On average, pitchers will perform about  5 to 6 percent worse in RISP situations, as measured by the on-base plus slugging percentage (OPS) of opposing hitters.  But according to FanGraphs, the Nationals tend to be 8.3 percent worse when in RISP situations.  That translates to the Nats ranking 11th in the National League in percentage of opposing runners stranded.

Couple that with the fact that two of the Nationals starting pitchers (and two of there big “innings-eaters,” Gio Gonzalez and Doug Fister) have WHIPS north of 1.4, and that translates to the Nats are giving up more base runners and more of those base runners are scoring. 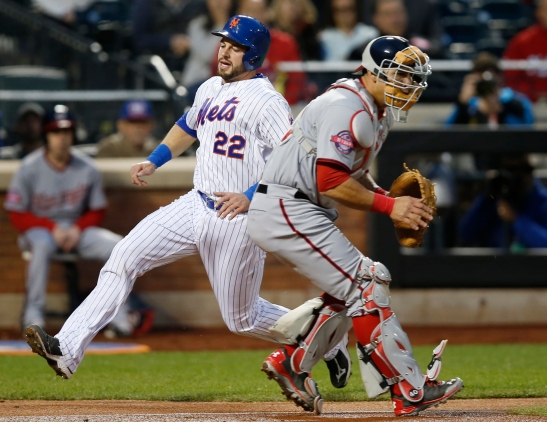 In a related matter, it certainly doesn’t help that Max Scherzer has morphed from virtually unhittable in May and June to a post All-Star break line of 2-3 and his ERA is swelling.  Scherzer gave up a total of eight earned runs in May; he’s given up double that in his last four starts.

Really, the Nationals can still pull this off; as much as they are sputtering, it’s not as if the Mets are pulling away.  As of this writing, the Nats are 60-61 and five games back of the New York Replacement Gia-dgers.  Manager Matt Williams needs to shake this team up somehow, but I’m not sure if he can do it or if he ever realizes the need.  The bottom line is not one thing I’ve just mentioned is a catastrophic failure on its own; but if they continue to keep happening simultaneously, they will prove to be the iceberg to the Nationals’ Titanic.