Guest Column: Conversations Not Meant To Be Public – The Unknown Blogger Finally Admits He Was Wrong About Kristaps Porzingis

EDITOR’S NOTE:  The Unknown Blogger has made several appearances here at Dubsism, and this probably won’t be the last.  For purposes of full disclosure, T.U.B. only pops up on this site from time to time as he left the world of professional sports journalism a few years back vowing never to return, but occasionally he can’t help but having a rant here.

This article is being written because I lost a bet with J-Dub, the jerk-off that runs this electronic fish-wrap. If you don’t know the guy, J-Dub is one of those guys who knows a little about everything.  His intelligence is very wide, but it’s about as deep as a cookie sheet.  He also has this really annoying habit of keeping his mouth shut unless he’s pretty sure he’s right. That means he is almost as annoying as getting a paper cut on your tongue.

If you haven’t guessed by reading this utter waste of interweb space he calls a blog, he is a heavy-duty consumer of all things sports-related.  Want to have a conversation about the 1983 Philadelphia Stars from the USFL? He’s your guy.  Need to know how international test cricket works? Call J-Dub. That’s why I should have known better making a bet with him over a European basketball player.

I grew up on Long Island in the late 60’s and early 70’s, which meant as a kid I got to see the Knicks in their championship era. In my day, we had guys like Walt Frazier, Phil Jackson, Willis Reed, Bill Bradley, and so on. In my days as young adult when I worked in the world of sports journalism, I had a front-row seat for the “oh-so-close” Patrick Ewing era Knicks.

Now, as middle-aged curmudgeon, I get this sorry-ass version. I’ve gotten used to seeing this team pick in the lottery section of the draft, and we all remember what happened with the Knicks a few years back. When the Knicks took Kristaps Porzingis with the 4th overall pick, I turned into this kid. 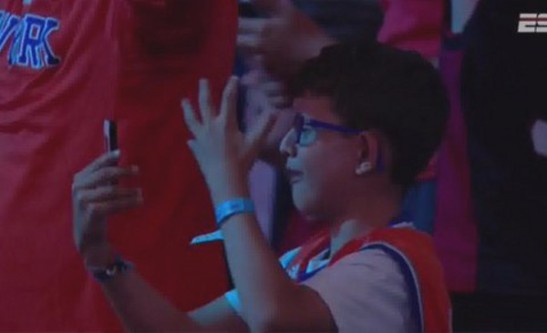 Remember that little fucktard? Well, I was right there with him.

“Who is this fucking guy?” I thought to myself. I wanted Justise Winslow from Duke; I thought it was time for a small forward/shooting guard/swing-type guy to become the primary scoring option so they can finally get rid of Carmelo Fucking Anthony and his bloated contract.  I’ve never liked that guy, I’ve always thought trading for him was a mistake, and I’m convinced you can’t win with a “ball stops here” sort of guy as your only serious scoring threat. But that’s for another time.

But there was no Justise; which meant no peace in my world.  The night of the draft, about 30 seconds after the Porzingis pick was made, I called J-Dub and restated my original question. Of course, the motherfucker recorded the conversation. He played it for me the other day to remind me of when the day would come I would have to admit I was wrong…and that day has come.

J-Dub: (hits the “record” button to preserve this moment for posterity) Hey, I’m pretty sure I know why you’re calling (chuckles)

J-Dub: Why do you say that? Even you’ve said you wouldn’t mind fucking Jeannie Buss.

J-Dub: Yeah…you and this kid on the Draft piss-crying over this going to burn your Knicks gear now?

T.U.B.: Seriously, who is this fucking guy?

T.U.B.: Bullshit. You’re like everybody else. You don’t have a fucking clue about this guy. You couldn’t even find Latvia on a map.  Isn’t Latvia a muscle in your back or some shit?

J-Dub: One, I do know where Latvia is, and two, they have the internet there. That means once I started seeing this guy’s name popping up in those stupid-ass mock drafts, I went out and found some video on this kid. He’s got all the tools, he just has to learn the NBA game.

T.U.B.: Like what? What can this fucking kid do?

J-Dub: He’s a small forward in a 7’3″ body. Despite his length, he’s got a surprisingly quick first step on the dribble-drive. He’s got great hands and he can shoot. I don’t know if he’s a good guy in the low-post, but he doesn’t have to be.

T.U.B.: See? That’s what I mean. What the fuck good is a seven-footer who can’t play under the basket?

J-Dub: Shut the fuck up. This coming from a guy who would have sold his own children as sex slaves if the Knicks could have signed Pau Gasol. I’m telling you, the only way this kid fails is if the Knicks do some stupid shit like play him at center. He’s fucking mismatch machine on the wing because he’s too long for a small forward, and he’s too quick for a big forward.

J-Dub: One, you called me, dickbreath.  Two, I was never an ankle bracelet on Alonzo Mourning.  Three, would you like to make a bet on this?

J-Dub: Within two years, Porzingis will be one of the best players in the league.

J-Dub: You’re money is no good on this one.  When you lose this bet, I want it to hurt.

J-Dub: Which means two years from now, because I know how much you hate admitting when you’re wrong, you will write a public admission of being wrong about Kristaps Porzingis.

J-Dub: Make it an even grand.  You aren’t winning this one.

J-Dub: No, I recorded this call. Just make sure you have a sharp crayon in two years (hangs up).

Like I said, today is the day I have to eat a crow about the size of a Volkswagen.  Not only was J-Dub right, but the fact that Kristaps Porzingis is an emerging superstar is one of the only things which keeps the sorry-ass Knicks watchable.  Today is the day because the Knicks are in ABC’s featured Sunday afternoon NBA game.  Even if they suck, the Knicks are still in New York, and even though they are playing Steph Curry and the Golden State Warriors, its also obvious that ABC/ESPN/Disney has figured out that the Knicks “marquee” players isn’t Carmelo Anthony anymore…it’s Porzingis.

If the butt-puckers at ABC/ESPN/Disney can figure that out, then there’s really no point in waiting for the exact date for the two-year bet.

3 comments on “Guest Column: Conversations Not Meant To Be Public – The Unknown Blogger Finally Admits He Was Wrong About Kristaps Porzingis”

This entry was posted on March 5, 2017 by J-Dub in Basketball, Sports and tagged Basketball, Conversations Not Meant To Be Public, Guest Columns, Kristaps Porzingis, The Unknown Blogger.