The Sports Sewer – Episode 7: Why The Weather Channel Might Be Colin Kaepernick’s Last Chance

This might be the first time I’ve made a connection between weather and sports.  Trust me, if you follow along on this, you’ll see it.  After all, that’s what Dubsism is all about; discovery.  You can learn more here by accident than in other places by design.

Today’s bit of enlightenment: It’s become clearer than the sky in the eye of a hurricane the Weather Channel is run by the people even dumber than the  same kind of soft-boiled egg-brained morons who run ESPN.  You don’t even need one of those “hurricane hunter” planes to see it.

I saw it this very morning as I flipped on my TV to check on the situation Hurricane Irma is posing for my Floridian friends such as my blog brother SportsChump.  I hadn’t even “Irished up” my first cup of coffee on the day when I was treated to this vista.

I couldn’t get over the fact this guy is telling me how dangerous storms like this can be.  No shit, Sherlock.  The whole time I’m watching this, I’m waiting for “Captain Windbreaker” to be eviscerated by a wind-driven “Stop” sign.  That’s when it dawned on me.  Getting storm safety advice from a guy minutes away from having a mini-van bounced off his face is exactly like the blow-holes at ESPN telling Colin Kaepernick can’t get a job in the NFL because of his “politics.”

Think about it.  Nobody shilled harder for America’s favorite knee-taking dipshit than the World Wide Bottom Feeder.  They want you to think nobody in the NFL wants to wade into the storm any taking Kaepernick would face in terms of public backlash.  There’s two reasons that is U.S.D.A. 100% Prime, pure uncut horseshit.

The first reason is easy.  The reason why the guy isn’t in the league is because he can’t play.  The proof of that is in the defenses Kaepernick’s proponents offer; they all miss the point.  I’ve ranted about that plenty of times, so there’s no need to do it again here.  Suffice it to say they prove my assertion about  there being only two types of “stat quoters:”

There is no Option C.

You can give me any statistic-based argument you like, but the fact is Kaepernick is likely never getting another job in the NFL because he fucked up his job interview.  Once the 49ers restructured his contract, every general manager in the NFL knew he was going to be available once he opted out of that deal (ASIDE: That’s another factor in his joblessness…he quit his last job…never forget that.)

When it comes to getting employed, if you’ve ever been on a job interview, you know all it takes to blow it is one mistake. For Kaepernick, that deal-killer came in the form of the game against the Bears. No matter what he did before or after that debacle, the question about his ability to play quarterback in the NFL will always come back to “Yeah, but what about that Bears game?” 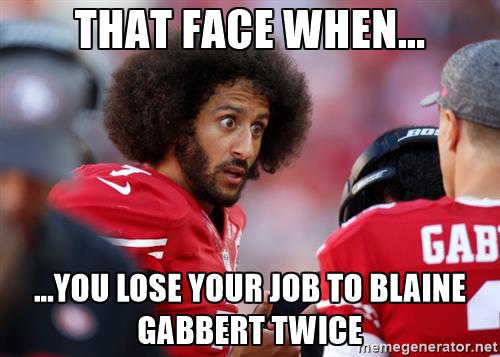 That brings us to the second reason. ESPN is continually trying to deny it went decidedly toward the left in terms of its silly need to inject politics into sports, but its blatantly obvious.  The fact they let turd-flumes like Jemele Hill spout their factually-challenged nonsense is really all the proof you need, but it also begs a question I’m not the only one to ask: If it’s such an outrage that Colin Kaepernick doesn’t have a job, why doesn’t ESPN hire him? They wouldn’t even have to do it as a football analyst.  Throw him on any of the host of unwatchable sludge-pumps that network features now to spout his crap.

The answer is simple.  Because even the World Wide Bottom Feeder isn’t as dumb as the Weather Channel.  ESPN already knows the power of the storm that is a public relations backlash; this is why its ratings are in continual free-fall.  As I’m writing this, you know there are heavy-duty discussion going on somewhere in the parent-child axis of ESPN-Disney about the real bottom line…profit and loss.  Conviction to an ideology is all well and good…until it gets a company sued by it’s stockholders or divested completely by it’s investors.

That’s why the Weather Channel might be Kaepernick’s last chance.  Judging by the picture of that poor bastard getting battering by the storm, the Weather Channel clearly has the mentality to weather any backlash they might face.  That means Colin Kaepernick’s future just might be in dodging flying  “Stop” signs while telling me all about how hurricanes are a direct result of “climate change.”

2 comments on “The Sports Sewer – Episode 7: Why The Weather Channel Might Be Colin Kaepernick’s Last Chance”

So...4 years after adopting this rescue cat, she's still obviously neglected. After all, we haven't even fixed her spinal deformity.
Here's one Dr. Rick missed. When you have a "favorite spatula," and you get upset because you broke it. #becomingyourparents
Now that my Champion is out, the best thing I can get out of this tournament is the Barkley-Lounger Head Polisher #marchmadness