One year ago today, J-Dub decided it was time for Dubsism to give back to you, the blog-reading public.  That’s why were here to answer question in an effort to help you Dubsists, because the people who support this blog might be the last vestiges on non-stupidity left in this country.  As such, they send us a lot of really great questions; ones that can only be done justice by J-Dub’s  rough-hewn, “don’t ask questions you don’t want to know the answer to” style of honesty you simply won’t find anywhere else.

Since tomorrow brings us one of the biggest sporting events not just in America, but in the world, we thought it would be a good time to answer some Super Bowl questions.

So, you were right.  Last year, I violated one of your rules for attending Super Bowl parties.  As a result, I caught a raging case of chlamydia and I had to quit my job because everybody knew my business.  Would you repost your rules about Super Bowl party etiquette so others won’t make the same mistake?

So, I just got done saying how Dubsists might be the “last vestiges of non-stupidity left in this country.” Nice job, Jass-hole; you’re the exception which proves the rule.

Here’s the deal, people…read the following very carefully.  Print them if you must, but whatever you do, follow them religiously.  After all, I’m not writing this stuff for my health; judging by Hugh Jass’ dose of California Cock-Rot, I need to be worried about yours.

The first rule of Super Bowl parties is don’t go to Super Bowl parties.  Super Bowl parties are the absolute worst; there’s nothing more godawful than trying to watch football in a room full of people who don’t know shit about it. But we’ve all been forced into them for various reasons. So, if you must, here’s a few general rules:

1) Don’t Get Drunk:  Getting shit-faced at the open bar at your company’s Christmas party is risky, yet acceptable. Hitting the highball on Super Sunday and pissing in the vegetable crisper of your wife’s best friend is going to redefine the term “problematic.”

2) Know Your Group: There’s only two types of people at a Super Bowl party; the people who care about the game, and the people who only want to see the commercials and the half-time show. Know which one is yours, and stay in your lane. These groups are fundamentally different, eternally divided, and never the twain shall meet. Don’t even try. You are not a missionary in the jungles of New Guinea; you’re at a Super Bowl Party. Don’t try to convert anybody.

3) No “Hook-Ups:”  This might be the single-biggest mistake people make. Unlike the office parties, Super Bowl gatherings are usually held in people’s homes, and everybody there has some sort of connection to the hosts. That means no matter what happens, somebody in that room is going to know your business.

Another problem is this offers a great opportunity to double-down on the complications of office flings. Try out this all-too-common scenario. Your buddy from work invites you to his Super Bowl party, during which you meet the best friend of your buddy’s wife, who just so happens to have the most amazing sets of boobs you’ve ever seen. You make your move, you hit paydirt, but the relationship proves to be little more than a one-nighter.  “Boobs girl” then proceeds to tell your buddy’s wife what an asshole you are, she commences to bust his balls incessantly about it, which at work you can tell is putting a chill on your friendship.  Not to mention, every time you get invited to a gathering at their house, “Boobs girl” is going to be there.  How’s that for “awkward?”

That’s why my advice is to eschew the Super Bowl party in general. You can’t get drunk and fuck the big-titted girl, so why bother?

That’s it, people…three simple rules.  Don’t be a Hugh Jass-hole and end up with your dick falling off in the shower Monday morning.

As an addendum to this, one of my favorite blogs has a solid guide as to the people at Super Bowl parties, and how you should strive not to be “that guy.”  Print that one too, staple it to this, and don’t make me have to say “I told you so.”

With the NFL’s ratings drop, do you think viewership for the Super Bowl will drop as well? 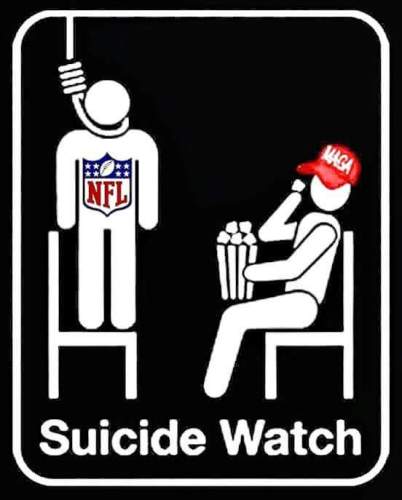 I honestly have no idea because there’s too many variables in play. First, there’s the stuff we already know; the national anthem protests and the fact the NFL is putting a crap product on the field. Combine that with the fact that a lot of America has a serious case of “Patriot Fatigue,” and a ratings drop is entirely possible.  If that happens, the days of pretending the NFL doesn’t have a major problem on its hands are undeniably over.

That’s because the Super Bowl is the NFL’s equivalent to “Black Friday;” it’s when the league pulls out all the stops to garner the largest viewership possible.  That’s what has made Super Bowl Sunday a de facto national holiday; it has something for everybody.  There’s the commercials which have become as much of an event as the game itself, there’s over-the-top halftime show, and as monstrous numbers of people congregate for house parties, if the numbers for the Super Bowl drop, there could be a ripple effect which has the potential to be catastrophic for the league and it’s sponsors.

Imagine if you will a scenario in which the ratings for the Super Bowl drop by 10%, a perfectly conceivable number as that approximates what the regular-season numbers have done over the last two seasons. All of a sudden, all those advertisers get 10% less return on investment from their multi-million dollar advertises.  It would also stand to reason 10% less people watching the game would mean a similar drop in delivery pizza sales and the stuff supermarkets sell in droves for Super Bowl Sunday.  The NFL has been living off the idea for decades that it is a veritable license to print money for it’s advertisers; an idea that will die a quick death with a 10% ratings drop.

With a Liverpool match and your Eagles in a Super Bowl on the same day, how can complete liver failure not be in your future?

For purposes of full disclosure, this question comes from somebody who knows me, and therefore knows that it matters little whether it’s European or American football, they both have the common effect of spiking my blood pressure.  Sometimes in order to take the edge off the football anxiety, I might occasionally have a touch of the grape.

To make a long story short, Liverpool kicks off at 12:30 Eastern, the Eagles take the field six hours later, and my liver will be suing for a divorce first thing Monday morning.

If the Eagles defense keeps the Patriots to two touchdowns or less, controls the line of scrimmage; if and the offense controls time of possession, doesn’t kill themselves with pre-snap penalties and turnovers, anything is possible.  Throw in a big play on defense and/or special teams, and you have the recipe the Chip Kelly Eagles used to beat the Patriots in Foxboro a few years back.  This Eagles team is far superior to that one, and frankly New England just doesn’t have the same air of invincibility they once did.

Conversely, if the Patriots get out to an early two-score lead, the ground-and-pound, ball control offensive philosophy becomes a problem; hence the idea the Eagles can’t win a shoot-out. The other key is directly related to why I made a distinction for “pre-snap” penalties.  The Eagles rally shouldn’t be afraid of a few well-timed personal fouls because the Patriots and specifically Tom Brady can be physically beaten to a pulp.  Now they have to be smart about it, you can’t do it on third down when the defense needs to get off the field, but history has shown us Brady’s performance gets degraded the more times he gets up looking out of his ear-hole.

Having said that, the prediction is Philadelphia 17, New England 13.  And on Monday morning while I’m getting my liver transplant, the City of Brotherly Love will be a smoldering hole in the ground.

Look at the big guy in the middle. Who knew Andre The Giant was part of the classic prog-rock band Kansas?
Apparently, that Global Warming thing is real. Break out the sunscreen for Wednesday!
You can have your own Christmas concert because WE'RE NOT GONNA TAKE IT!