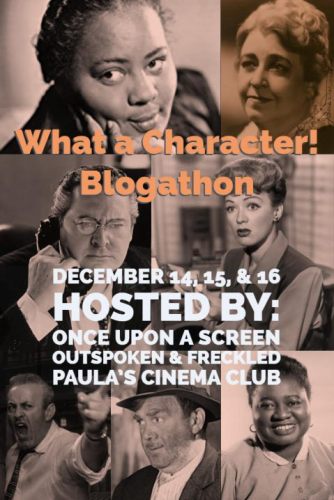 NOTE: This installment of Sports Analogies Hidden In Classic Movies is being done as part of a blog-a-thon celebrating “character actors.” This is an event hosted by three blogs called Once Upon a Screen, Outspoken & Freckled, and Paula’s Cinema Club.  This is the first blog-a-thon I’ve participated in with them; hopefully I can live up to the standard of quality they’ve already established so they will allow me to come back.

For the 25th installment in this series, I’m going to go in a slightly different direction. Instead of focusing on one particular film, I’m going to examine the career of one actor.  When I first saw the announcement of this “character actor” blog-a-thon, I jumped at the chance to participate because character actors matter. That’s why if you peruse my list of favorite actors, you will see many of the “usual suspects,” but you’re also going to see many non-leading-man types as well.

However, this isn’t to say I haven’t discussed “character actors” before; in fact I had the very idea for this blog-a-thon when I was putting together a page dedicated to just such projects, but the esteemed three hosts of this event beat me to the punch.

Many classic film fans consider Walter Brennan to be the greatest “character actor” in the history. Those who believe that have Brennan’s three Academy Awards to back them up; only four people ever have won three or more Oscars. Even I have discussed before Brennan’s importance to “Sergeant York.” Roger Ebert once said that “any movie with M. Emmet Walsh or Harry Dean Stanton in a supporting role can’t be all bad.” The entire point of this blog-a-thon is heralding the work of the great “character actors.” But for my money, any conversation about great “character actors” cannot be complete without the mention of George Kennedy. 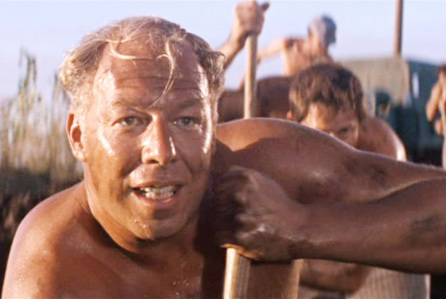 On my list of favorite actors and their sporting equivalents, I compared Kennedy to an American football offensive lineman. There’s a reason for this beyond the fact Kennedy was a enormous man like linemen are.

Coaches are like directors; the guys who call the shots.  Occasionally, you get a great one who becomes a star in his own right.  But for the most part, coaches are as good as their players; it’s a hell of a lot easier to make a great movie with Tom Hanks than Tom Cruise.  The fact that Rob Reiner made a great movie (A Few Good Men) with both Tom Cruise AND Demi Moore is a minor miracle, but it establishes coaches and directors share a common trait.  The great ones get more out of their players than the players think they have.

On the gridiron, the defensive side of the ball usually doesn’t get a lot of the glory.  The movie comparison for the defense lies in the film crew, set designers, extras, and others who usually provide their contributions in anonymity.  But the old adage in football is “defense wins championships,” which has a lot of truth in it because you can win a lot of games if you don’t let the other team score.  But it is also true no movie ever won Best Picture because of it’s awesome set designs.

Even if you have the greatest defense imaginable, at some point you have to score.  That’s why there’s another old saying “the best defense is a good offense.” This is why fans want to see touchdowns, not tackles.  This is also why the offense on a football team represents the “on-screen” talent. The backs and receivers would be the main characters. Despite the glory they get, for movie comparison purposes, they tend to fill those “small but important” roles; the ones with limited screen time, but they have a disproportionately high impact on the film. In football, this is all about a receiver who only has two catches, but they are both touchdowns. The perfect movie example comes from the aforementioned “A Few Good Men;” Jack Nicholson’s Colonel Jessup is on screen for less than twenty minutes, but there’s no denying the film revolves around him.

But there’s one thing that can’t be disputed.  None of it happens without the “heavy lifting” provided by the offensive line.  Teams have won championships with defense, teams have won championships with star quarterbacks, teams have won championships with a sundry combination of the two, but nobody ever won anything without the five big guys up front. As far as movies are concerned, the “offensive linemen” are the supporting actors who are as crucial to the plot of a film as are the leads. If you doubt that, try to imagine “Cool Hand Luke” without George Kennedy’s “Dragline.” The movie would completely fall apart without him; it might just be my favorite “non-leading man” performance ever.  Paul Newman is clearly the star/quarterback of that film, but George Kennedy does the “heavy lifting” holding that movie together. 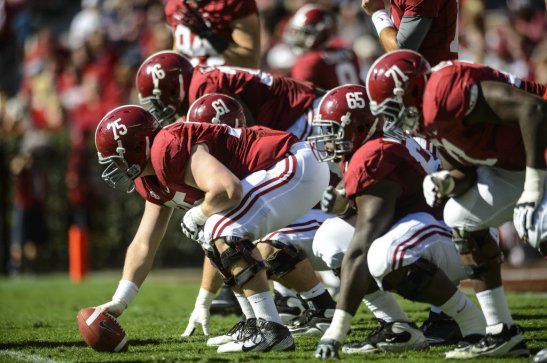 Not “leading men,” but they certainly lead the way.

It takes more than just brawn to make a great offensive lineman.  Granted, a big part of playing that position involves a lot of sheer brute force, and Kennedy could easily play to that given his size. He “made his bones” portraying knuckle-busters like “Dragline” or “Red Leary” from “Thunderbolt and Lightfoot.” That’s why Kennedy was compared to former NFL offensive lineman Conrad Dobler, a guy who wore a fake cast strictly for bludgeoning opponents.

But what most people don’t realize is that offensive linemen also need to be versatile; not only do they need big be big and strong, they also need the feet of a dancer.  Footwork is as important as brawn to be a great lineman, and nothing says “versatility” like being a 300-pounder who is light on his feet.  To this end, George Kennedy had an amazing acting range; not only could he play the “heavy-handed brute,” his ”Ed Hocken” role in “The Naked Gun” series proved his proclivity for comedy.

That range is why George Kennedy racked up over 200 appearances in both television and films.  Not only was he a prodigious performer, he was also well-respected within the Hollywood community. His Academy Award for his performance in “Cool Hand Luke” bears that out.

George Kennedy may or may not be the best “character actor,” but he’s my favorite.

P.S. Be sure to check out my Movies and Blog-a-thons page because I have several interesting blog-a-thon ideas scheduled there for 2019 which haven’t been announced yet…all participants are welcome and co-hosting opportunities are available!

This entry was posted on December 15, 2018 by J-Dub in Movies, Sports and tagged Classic Movies, George Kennedy, Sports Analogies Hidden In Classic Movies.