Ask a 70’s TV Sports Anchor – Episode 9: What Were The Lakers Doing?

EDITOR’S NOTE: Boyd Bergquist was the sports director at KETS-TV in East Tree Stump, Nebraska for almost 40 years.  Known across the Husker state as the voice of the Boy’s High School Basketball Tournament, Bergquist was a four-time winner of the Marv J. Butz “Golden Cob” Award For Excellence In Nebraska Broadcast Journalism.  That background, along with his quick if not cliché-riddled wit and love of single-malt scotch makes Bergquist a perfect fit to be our “Question” guy.

In the week since the NBA trade deadline passed, we’ve received several variants of the same questions…and it’s a pretty good one. So we let Boyd take his shot at it.

With what happened with the Anthony Davis trade stuff, and what the Lakers actually did in the run up to the trade deadline, what the hell is going on in Los Angeles?

In my mind, there’s two explanations here; you tell me which one you like best.

The first is what I like to call “The LeBron Factor.” When my kids were kids, they used to play this stuff called “Dungeons and Dragons.” for short, they called it “D&D.” If you haven’t noticed, LeBron brings his own brand of “D&D” everywhere he goes. It is called “Drama and Discord.” What it all comes down to is LeBron becomes a de facto front-office member everywhere he goes; he gets coaches hired and fired, he gets players signed, released, and traded. Even the fans of the Indiana Pacers knew that two days before the trade deadline in the heat of the Anthony Davis trade talks.

We all know that the one thing LeBron wants in the twilight of his career is rings. Even J-Dub, the most ardent Lakers fan I know understands this roster isn’t the squad that will be setting up the presses to start printing the “King James’ Championship Bibles.”  In his original breakdown of what the LeBron era in Los Angeles would likely be, He followed that up with some hard realities once the LeBron era was itself a reality. 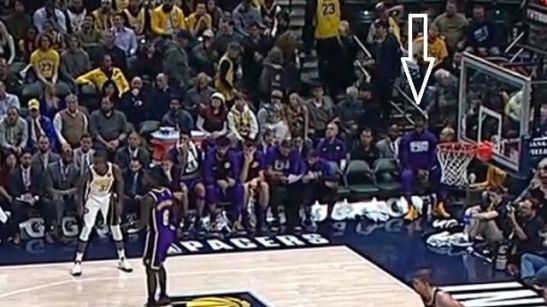 LeBron sitting with his closest teammates.

The one reality in all of that is the Lakers know they need another “big gun” to go with LeBron. That’s why the “Davis trade” talk took on such a life of it’s own. Remember back in the fall when the expectations were what I thought was absurdly high?  There were people out there who thought the Lakers could be the #3 seed in the Western Conference play-offs. As silly as that was, once Christmas Day happened and LeBron got hurt,  the Lakers season quickly went sideways.  Once it became clear the challenge was going to be even making the play-offs, the reek of desperation hung in the air.

If you don’t like that as the explanation for the Lakers’ front-office stupidity, you can at least see it as the stage-setter for Scenario #2.  Suppose the Pelicans wanted to see what the market for Anthony Davis might be? Don’t forget that within the last year and a half, it certainly looked as if the New Orleans Pelican were trying to build a contender by adding talent like Jrue Holliday, E’Twaun Moore, and let us not forget DeMarcus Cousins.

But that train derailed once Cousins tore an Achilles’ tendon.

Once the initial plan wasn’t going to pan out, Pelican general manager Dell Demps had a decision to make. Does he try to add another “big gun”  to go with Anthony Davis, or does he sell and start over? And if you want to sell something, it’s always a good idea to see what a) people are willing to pay, or b) get a desperate sucker to set a high price for you.

Enter Magic Johnson and the Lakers. Magic may have been one of the great hoopsters of all time, but as a front-office figure, he’s that guy that carnival hucksters salivate over.

The problem is that Magic wasn’t even as smart as the “Rube” in “The Jerk;” at least the “Rube” knew when to walk away. Magic and the Lakers did a great job of dropping their collective pants, holding out their collective wallet, and chasing themselves up the price tree.

It amazed me that nobody figured out Dell Demps might just have been running a game on the league, and Magic turned out to be the mark.  Maybe there’s a problem in the Pelicans’ locker room, maybe there isn’t…I don’t know.  What I do know is Demps has a hot property, just made it clear he’s willing to talk deal in the off-season, and made one of the few teams which can afford his hot property set a price which can only go up.

One comment on “Ask a 70’s TV Sports Anchor – Episode 9: What Were The Lakers Doing?”

Looks like I got a new pet. I'll call him the Birthday Bee.
So...4 years after adopting this rescue cat, she's still obviously neglected. After all, we haven't even fixed her spinal deformity.
Here's one Dr. Rick missed. When you have a "favorite spatula," and you get upset because you broke it. #becomingyourparents