Sports Analogies Hidden In Classic Movies – Volume 39: “What Ever Happened To Baby Jane?” 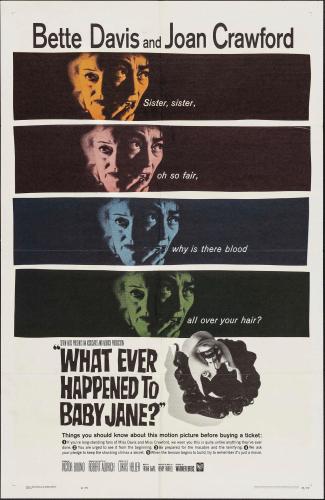 NOTE: This installment of Sports Analogies Hidden In Classic Movies is being done as part of something called the Joan Crawford – Queen of the Silver Screen Blog-A-Thon; an event being hosted by two outstanding classic film blogs Pale Writer and Poppity Talks Classic Film. Their blogs are so good they make me keep up my “Don Quixote”-type quest dreaming the impossible dream…maybe  someday I might be a film blogger of their quality.  You can debate amongst yourselves the likelihood of that actually happening; they’ve already given me the gift of welcoming my nonsense in the events they host.

Here’s where you can see all the contributors to this blog-a-thon:

The story starts in 1917 with “Baby Jane” Hudson (played by Bette Davis) as a huge child star in Vaudeville.  While Baby Jane is basking in the limelight, her sister Blanche Hudson (played by Joan Crawford) personifies “overshadowed.”  However, as time passes, the roles are reversed.  Blanche becomes such a major star she gets creative input in her films and studio execs humor her by giving her “washed-up ” sister screen tests.

There’s an accident which costs Blanche the use of her legs. Blanche ends up living in a Hollywood house purchased with her movie earnings; her sister Baby Jane is effectively her live-in caregiver splitting duties with hired domestic Elvira Stitt (played by Maidie Norman).  As the house is not handicap-accessible, Blanche’s being wheel-chair bound makes her dependent on Baby Jane.

This is a problem since Baby Jane has become mentally unstable; a condition she is self-medicating with copious amounts of scotch and gin. Coupled with her resentment of Blanche for her success, the de-evolution of their relationship from sisters to inmate and jailer becomes inevitable.  The stakes escalate when Blanche informs Baby Jane she intends to sell the house.  Paranoid but not wrong, Baby Jane suspects Blanche will commit her to an asylum once the house is sold.  Baby Jane’s treatment of Blanche becomes increasingly sadistic and isolationist.

This descent is fueled by her own delusion…oh, and her alcoholism isn’t helping.  Despite the fact Baby Jane is deep into her middle-aged years, she’s hanging on to the “Baby Jane” persona with “butter-knife” levels of make-up and child-like ribbons in her hair.   As part of her detachment from reality, Baby Jane is determined to re-capture her childhood stardom.

To that end, she places a newspaper advertisement for a pianist to accompany her vocal act. Her ad is answered by Edwin Flagg (played by Victor Buono) an eccentric, pudgy, and broke loner living with his mother.  During his audition at the Hudson’s home, Edwin simultaneously cringes at her off-key squawking; but because he needs the money, he also insincerely flatters Jane and encourages her to revive her act.

This starts a series of events leading to the inevitable point where everything spirals out of control.  After the audition, Baby Jane drives Edwin home, during which time Blanche escapes from her room and discovers Baby Jane has been forging her signature on checks to buy costumes for her act…and more importantly to give Baby Jane access  to Blanche’s money in the event of her death. With a now turbo-charged level of desperation, Blanche crawls down the stairs to make a call for help, but Baby Jane catches her and savagely beats Blanche.

fter a few days, the police call Baby Jane informing her that Elvira has been reported missing.  Naturally, Baby Jane panics and prepares to flee with Blanche.  But before they can leave, Edwin shows up at the house uninvited and drunk. After he discovers Blanche in the same condition as did Elvira, Edwin flees and calls the police.

Baby Jane gets Blanche out of the house before the police arrive.  Baby Jane takes them to the beach, where she completely reverts to her childhood persona.  While Baby Jane sinks deeper into madness, Blanche looks obviously near death. Two motorcycle cops the find Hudson’s car at the beach and immediately connect it to Elvira’s murder. This leads to the inevitable discovery of Baby Jane and Blanche on the beach, where Baby Jane is dancing before a crowd of horrified beach-goers believing she is once again “performing” for her adoring fans, while Blanche lies motionless on the sand.

The story of Baby Jane Hudson starts in 1917 Vaudeville. The story of Brett Favre starts in 1991. Despite that nearly three-quarter of a century difference, both those stories share an ending; they are both about not knowing when it’s over. The analogy starts with the studio executives screening a performance by a now middle-aged Jane and being thoroughly disgusted by it.  In their subsequent discussion, it becomes clear Jane is being “entertained” as a favor to her sister Blanche, who is major star at this point.  This charade gives Jane the illusion she is on the verge of a major comeback, which is anything but true.

SPOILER ALERT: Be advised that as I much as I try to avoid spoilers, it is nearly impossible for me to do so in this case.  I really can’t show the hidden sports analogy here without revealing something that isn’t immediately apparent to the first-time viewer of this film.

When you watch “Whatever Happened To Baby Jane?” you don’t need John Madden’s “tele-strator” drawing you the picture that Baby Jane spends her whole life hanging on to days gone by.  It is also clear from early on she’s completely out of her mind.  What isn’t immediately apparent is Blanche isn’t playing with a full deck either. You don’t know that at first; in fact the first-time viewer will spent a lot of this movie feeling sorry for Blanche.  Then comes the discovery that she’s as self-destructive as Baby Jane; she just does it in giant strokes rather than a bottle of scotch and a roasted parakeet at a time.

That’s because at the end of the movie, Blanche confesses she’s is in the wheelchair because she shattered her spine when her car struck the iron gates outside their mansion when she attempted to run over Baby Jane because she had been mocking her.  Then it comes out that all along, Blanche has led Baby Jane to believe the “accident” was all Jane’s fault, thus allowing Blanche to lay the guilt trip on her effectively shackling Jane as a full-time caregiver.  You can only imagine what happens at that point.

Any way you slice it, this is a tale of delusion and desperation colliding at high speed. Almost a decade ago, this very blog was borne of just such a discussion. August 18th, 2009 was the day the “Baby Jane” level delusion of Brett Favre’s recapturing past glory ran headlong into the desperation of Minnesota Viking fans to win a Super Bowl.  Pointing out this was going to end badly for everybody involved meant it took no time at all for me to become Public Enemy #1 in the Land of 10,000 Lakes.  Clicking on “Brett Favre” in this blog’s tag cloud will yield an avalanche of articles, including the brutally honest call to reality for Viking fans after their loss in the 2009 NFC championship game.

In other words, I was in the role of “Elvira,” despite her relative powerlessness to stop the insanity, she still gave it an effort and in return caught a hammer in the brain. Brett Favre is a tailor-made “Baby Jane” as he’s another person who just couldn’t come to terms with the fact their starring days were over. But, it is the self-inflicted misery of “Blanche” which not only embodies the futility of being a Viking fan, it also demonstrates how much they deserve it.  Here’s why:

They both enjoy success which comes with a tragic ending.

There is only one other team which has lost as many Super Bowls as the Minnesota Vikings without having won one.  There is no other team which has lost more NFC Championship games than the Vikes. That’s a lot being good enough to get there, but not having the goods to seal the deal. All tolled, that’s nearly 15 times the Vikings have been a bridesmaid without getting a ring.

They are both completely delusional about reality. 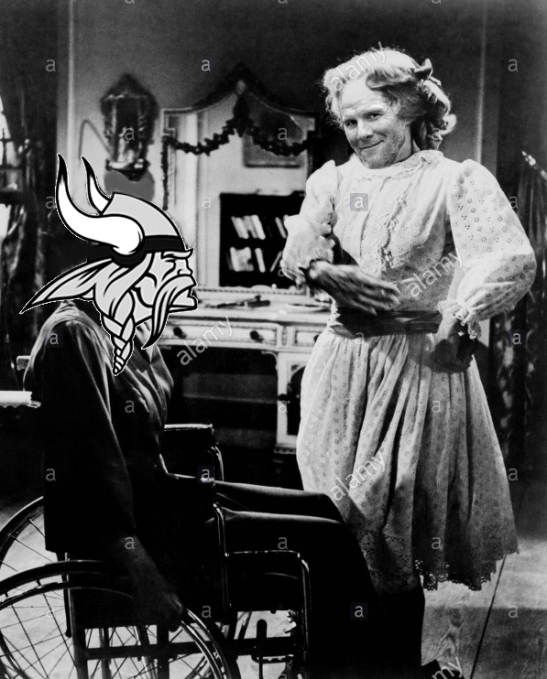 Imagine what was going through Blanche’s mind while she’s tied up in that bedroom watching Baby Jane completely go off the deep end; losing any semblance of control over the monster she’s created. This has to be how Viking fans felt in the 2009 NFC Championship game when “Baby Jane” Favre bitch-slapped the Vikings’ Super Bowl hopes by throwing three interceptions, including the one at the end of the 4th quarter which really ripped the guts out of Minnesota. Yet, after the Viking lost because of Favre’s continual bad decision making (and two Adrian Peterson fumbles), Vikes fans to this day will cry about how the Saints “played dirty.”

They both love to play the “sympathy” card even though they usually incite what happens to them.

First and foremost, Vikings fans begged the wrath of the gatekeepers for football karma when they spent a decade-and-a-half equating “Baby Jane” Favre with Hitler, Osama bin Laden, and the second “Darrin” from “Bewitched,” then instantly made transmogrified him into Mother Teresa and the guy who invented that spray cheese in a can (Minnesotans love that shit).  The very genesis of this blog was all about the day Favre came to the Vikings.

The day after, Viking fans had already planned the victory parade down Hennepin Avenue, despite my “Emperor is naked” cautionary tales. Nobody in the land of the purple wanted to hear…let alone accept…the fact that Favre was 40 years old, had a surgically rebuilt throwing arm, and was at least a decade past his Super Bowl and league MVP winning days. Nothing else mattered, the delusion continued right up until the end when like Blanche, Favre lie motionless on the ground.

Hope is not a strategy; but the only thing worse than having no hope is false hope.

17 comments on “Sports Analogies Hidden In Classic Movies – Volume 39: “What Ever Happened To Baby Jane?””