Movies Everybody Loves That I Hate – Episode 6: “A Few Good Men” 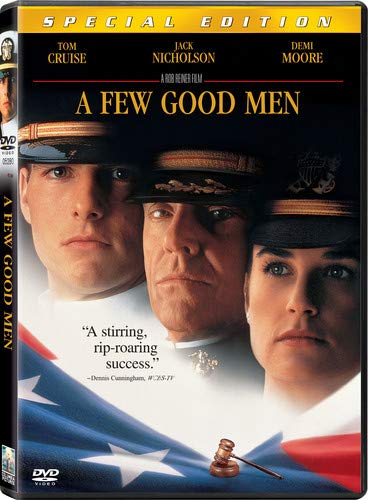 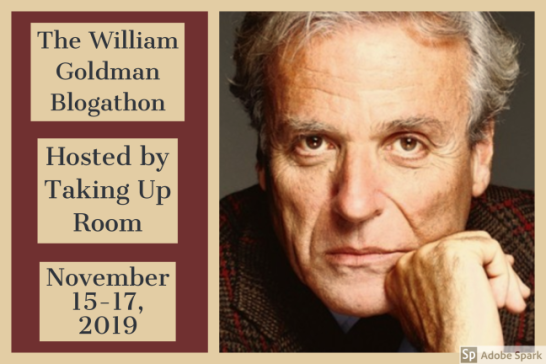 NOTE: This installment of Movies Everybody Loves That I Hate is being done as part of something called the William Goldman Blog-A-Thon being hosted by Taking Up Room.  Her premise for this event is rather simple.

In 2018, film and letters lost the great William Goldman. As far as movies go, he’s remembered best for The Princess Bride, Butch Cassidy and the Sundance Kid, and All the President’s Men, but his filmography also includes such classics as Heat and A Bridge Too Far.

Mr. Goldman was a master of dialogue, and anyone who’s seen The Princess Bride or Butch Cassidy knows that the lines are endlessly quotable. His prose style was colorful and direct, embodying what Mark Twain said about words: “The difference between the right word and the almost right word is the difference between the lightning and the lightning bug.”

Frankly, I think he wrote with the whole fucking thunderstorm.  This movie is a great example.

You can see all the participants in this blog-a-thon here.

The Connection to William Goldman:

William Goldman did an uncredited re-write of Aaron Sorkin’s original screenplay for “A Few Good Men.” There was a time when before Sorkin snorted half the gross domestic product of Colombia that I considered him to be a talented writer, this film helped end that.  If it weren’t for Goldman’s re-write, It would have taken Marine Corps-level discipline to sit through this movie.  I can’t imagine what a hot mess this script must have been before the application of Goldman’s lightning.

Goldman’s re-working of this script made the finished film only flawed, not completely unwatchable like the original draft would have been. The film pulls this off because Goldman made the flaws he couldn’t fix almost imperceptible to the untrained eye. However, I can see them, because I spent the first half of my life around the military; I grew up on U.S. Air Force bases, then served myself as evidenced by the most recent blog-a-thon hosted by myself and RealWeegieMidget Reviews.

The problem isn’t that “A Few Good Men” isn’t a bad movie; it’s actually pretty good. For purposes of full disclosure I can’t stand Rob Reiner, Demi Moore, or the multi-talentless Tom Cruise, but they somehow managed to make a pretty damn good movie despite each other. That’s all about William Goldman; his re-write saves this movie from a lot of Aaron Sorkin’s “land of make-believe” crap. The remnants of that are what really chap my ass about this movie.  It goes out of it’s way to be anti-military, so much so it so at times it doesn’t make any sense.

In America, people of a certain ideological persuasion made Marine Lieutenant Colonel Oliver North a political boogey-man because he was involved in a bunch of clandestine shenanigans during the Reagan administration.  The problem was as much as they would have liked, the American Left couldn’t hang anything criminal on the guy. The Iran-Contra hearings dominated the news when I was in college in 1987, and the way they played out didn’t give the left ending they wanted; largely because they never been able to tell the difference between unethical and illegal.

They wanted those hearings to end just they way “A Few Good Men” did, North was supposed go apoplectic and rat out everybody while simultaneously falling on his own sword. That didn’t happen, which is exactly why Sorkin and the Hollywood fantasy machine cranked out a Marine colonel they could convict.

There’s two things Jessup says during the “breakfast” scene in Guantanamo which would have had his hide on a high rack curing in the Cuban sun. First, the comment about the Navy and their “faggoty white uniforms” would have certainly landed him in some hot water; there’s no way two Judge Advocate General (JAG) officers aren’t going to fill in Jessup’s superiors about that.  But what would really brought him some heavy weather was the comment about “there’s nothing quite like getting a blow-job from a superior officer, but until a woman gets elected president, I’m going to have to settle for cold showers.”

1992 may have been nearly three decades ago, but it wasn’t the stone age. A comment like that directed at a female JAG officer would have had Jessup at the very least getting a formal reprimand, even possibly facing a formal charge of conduct unbecoming  an officer, which under the Uniform code of Military Justice is a very serious charge.  Don’t forget the Department of the Navy had just endured the “Tailhook” scandal the year before, so there would have been a dramatically heightened sensitivity to any untoward behavior directed at a woman.

3) Colonel Jessup’s “Boss” Would Not Be The President

In other words, Jessup had delusions of grandeur if he thought he needed to go all the way to the Oval Office to get his horn honked. You have to understand that after 9/11, the role of Guantanamo Bay changed dramatically.  Before then, Guantanamo Bay was a back-water for the USMC; the commander of the Marine security regiment there would not report directly to the president.  There would have been a chain of command up through the Marine Corps, the Department of the Navy, and the Pentagon.  In other words, there would have been a lot of brass between Jessup and the White House.

That brings us to the first part of this movie which makes no sense.  According to the movie, Colonel Jessup is about to me named the Director of the National Security Agency…oh by the way, that’s the organization Oliver North worked for…I’m sure that’s purely coincidental.  In any event, a guy like Jessup about to be given such a plum appointment wouldn’t be waiting in the wings in Guantanamo, he’d already be a staff officer at Quantico or the Pentagon.  In 1992, the guy commanding  the Marines in Guantanamo likely would have been a colonel who scored some major points in 1991’s Gulf War and just needed one last “cush” assignment before retirement.

Throughout this movie, there’s a fundamental misunderstanding of how the chain of command works.  It all starts with the assertion that PFC Santiago broke the chain of command in an attempt to get transferred out of Guantanamo.  At this point, Jessup orders Santiago’s commanding officer, Lieutenant Kendrick to train Santiago to become a better Marine. Meanwhile Jessup’s executive officer Lieutenant Colonel Matthew Markinson believes Santiago should be transferred, but there’s some links missing in the chain…

5) Where Are The Sergeants?

This movie needed Gunnery Sergeant Thomas Highway, who would have had this situation squared away in no time.

But the most glaring omission is the complete lack of a sergeant.  The rifle squad is the fundamental component in the construct of Marine infantry; every rifle platoon consists of three to five squads, each of which is led by a sergeant.  The sergeant is the rank of leadership closest to the men, which is why there’s an old saying about wars being planned by generals, but are won by sergeants.  Think about it…how many other movies about the Marine Corps have you seen with no mention of a sergeant?

The point here is that the ultimate responsibility for training and/or disciplining Private Santiago would have fallen on his squad leader, not some Lance Corporal and dimbulb Private First Class.

6) Speaking of which, PFC Downey Is Easily The Dumbest Fictional Marine EVER

First of all, that’s quite an accomplishment considering he has to beat out Gomer Pyle and his his equally-dunderheaded squad leader, Sergeant Carter. At least Pyle has an affable southern charm to him, but the bristle-headed Carter can’t figure out how to out-smart Pyle.

Then there’s the matter of Downey.  If it weren’t for him, they would have all skated on all the charges, because he’s the one who can’t keep his story straight.  Under cross-examination, Downey spills the beans that he wasn’t actually present when  Lance Corporal Dawson received the supposed “Code Red” order.  That admission leads to a series of events which not only starts the unraveling of cover-up surrounding Santiago’s death, culminating with Markinson admitting that Jessup lied about ordering Santiago’s transfer.  However, since Markinson feels guilty about failing to protect a Marine under his command, rather than testify he commits suicide.

But the worst part comes at the end when Downey can’t understand why after being cleared of the murder charge, he still found guilty of “conduct unbecoming” and ordered to be dishonorably discharged.  Even after Dawson explains it to him, you can tell he still doesn’t grasp the severity of his own actions.

Before he eats his pistol, Lieutenant Colonel Markinson pulls a disappearing act during which it becomes known he was trained in counter-intelligence.  That means he knew how to pull of some sneaky shit (again, just like Lieutenant Colonel Oliver North…again I’m sure that’s coincidental).  That also means he could have done several things rather than waiting to be swirled into Jessup’s problems.

He could have used back-channels Jessup would have never known about to get a transfer for Santiago from levels above Jessup. He could have dimed-out Jessup in ways that would not have required him to testify and admit his role in this mess.  Most importantly, as Jessup was about to be named the Director of the National Security Agency, Markinson’s whole raison d’être as Jessup’s executive officer (who just so happened to be trained in counter-intelligence) would have been to make sure problems like Santiago never rose to the level of taking down a guy like Jessup.

We all know the game “Six Degrees of Kevin Bacon” which postulates that any actor can be linked to Kevin Bacon by forming a chain from movies in which they’ve appeared, then through movies somebody who appeared in the original movie, and so on and so forth using less than six links in the chain.

There’s really no denying there’s no shortage of familiar faces in this film, some of which have impressive IMDB pages.

9) There’s No Way That Ending Happens In Real-Life

I’m sorry, but as for entertaining as it is, the scene of Colonel Jessup snapping a bolt and charging like a bar-room brawler just wouldn’t happen.  Once of the central components of the training of military officers is impulse control.

In battle, impulsiveness can be fatal. Not to mention, nobody who makes it to the rank of colonel is dumb enough to hand over his own head on a platter like Jessup does. Despite what you may want to believe, nobody is egotistic enough to sentence themselves to a dishonorable discharge and  life imprisonment.

Watching this movie with a Marine is like letting your wife look at her wedding ring with a jeweler’s loop.  Once the flaws are seen, there’s no putting the genie back in the bottle.

You can see all the movies I hate here.

12 comments on “Movies Everybody Loves That I Hate – Episode 6: “A Few Good Men””