The trouble with the word “curve” is it winds its way to several different meanings in the English lexicon. It can send you right back to the days of 9th-grade algebra describing the graphic result of a binomial equation. It can also mean the new parts on that girl next to you in that class in the fall of 9th grade that she didn’t have in the spring of the 8th.  Obviously, as a  sports blogger is going. I’m going to point out that terms’ baseball connotations.

The baseball thing isn’t as important as the fact for the second straight week, I’m going to liken gambling on college football to a baseball movie; this time “The Trouble With The Curve.” I’ve been a fan of Clint Eastwood since I was old to appreciate all his talents; I’m even more of a fan now that he is it the twilight of the same stage of life dawning on me…that of the crabby old man.

Frankly, this isn’t all that new. Eastwood may be 35 years my senior, I’ve often been accused of being an “old soul.” Mrs. J-Dub would be more than happy to give you a list of comparisons between myself and Eastwood’s “Gunnery Sergeant Highway” from “Heartbreak Ridge.” It isn’t hard to catch me on my deck imbibing some form of adult beverage muttering something monstrously impolitic about (insert topic here) like Walt Kowalski from “Gran Torino.” But there’s something about the “The Trouble with the Curve” which calls out to an old-school gambler. 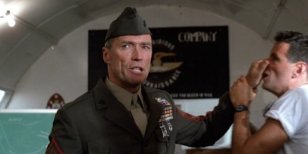 Gunnery Sergeant Thomas Highway would have had this situation squared away in no time.

Watching this movie, it’s pretty easy to tell this was Eastwood’s response to “Moneyball,” and you can tell he hated that movie. If you’re not familiar, “Moneyball” is the movie version of the fairy-tale about how analytics is the “be-all, end-all” for predicting performance in sports. Based on the Oakland A’s and their moderate success in the early 2000’s would have you believe that the A’s found success simply by looking at numbers nobody else did. What a bunch of crap.

First of all, I’m well on record as saying there are only two kinds of people who use numbers to create narratives about sports; those who didn’t see the game, and those who don’t know what they are looking at. In other words, if you watch “Moneyball,” you might think the Oakland A’s became a perennial play-off team in the early 2000’s because they figured out Scott Hatteberg should be a 1st baseman. Believing that completely ignores the fact that during this time, the A’s had three of the best young pitchers in the game. Oh, “Moneyball” also conveniently omits the fact the Oakland A’s have only ever won one play-off series in the “Moneyball” era, and they have to even see a World Series during this time.

“The Trouble With The Curve” exposes the difference between a number-cruncher and an old-school “eyeball test” guy. If there is anybody who understands the difference, it’s a gambler. Old-school gamblers today watch ESPN and see it filled up with all sorts of fabricated bullshit numbers. My personal favorite in the “FPI Chance of Winning” for any given event. Not only is it completely useless because it is all based on ‘data” and a methodology on a footing as sound as the future of cable television, but it’s ALREADY BEEN DONE. It’s called a gambling line. Whether it’s the point spread or the money line, the bigger the number, lower the chance your team is winning outright. Gambling wouldn’t exist if it was all about picking winners straight-up. That’s why there has to be some mechanism for balancing the action, and in doing so offering the hope of beating the line.

That brings us to the only analytic that really matters…the balance on the J-Dub Gambling Challenge bankroll.  It took a nick last week, dropping $83 to a season total of $7,315.

And therein lies the fatal flaw with the FPI;…there’s no money behind it. To fix that…let’s get ready to gamble…

Thanks to the Supreme Court, gambling is no longer illegal at Bushwood, sir. However, the Supreme Court can’t really help me unless one of them is willing to keep Mrs. J-Dub from braining me with a cast-iron skillet if she found out how many dimes I’m dropping on college football. That means that as far as she knows, all wagers are mythical in nature and this is in no way, shape, or form a gambling advice column. In other words, if you lose your own “real” money, that’s nobody’s fault but yours, so don’t yell at me when we meet at the plasma center on Monday.

J-Dub’s Payday of the Week: