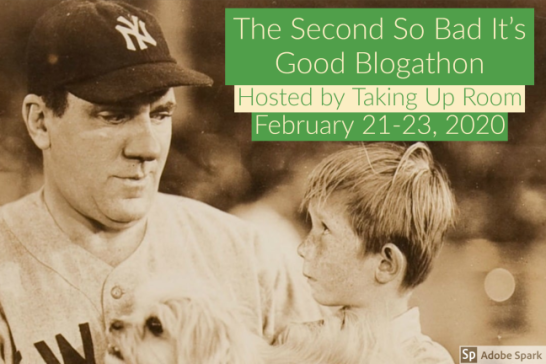 NOTE: This installment of Sports Analogies Hidden In Classic Movies is being done as part of something called the Second So Bad It’s Good Blog-A-Thon being hosted by Taking Up Room. I keep telling her this will easily be the worst movie in this event, but she thinks the competition is stiffer than I think.  You’ll have to be the judge; you can see all the contributors to this blog-a-thon here:

If we were to have a contest as to the bona fides for a bad movie, I would bet a large amount of money I win on this one phrase:

“Produced and directed by Bert Convy.”

When you have a D-:List comedy bankrolled and directed by a 1970s/80s game-show host…well, doesn’t “bad” just seem to be in the cards?

If that’s not enough, let’s talk about this movie’s first-class pedigree for “bad.” The best way to describe it is the 1950s kids from the “teen” comedy “Porky’s” grew up, graduated, and ended up in the “Cold War” American military of the 1960s. But fret not, you fans of the “Porky’s” franchise…this movie still comes with a full complement of bawdy sex and bodily-function jokes, complete with a bad-taste-defining “hula dance” and a “fart-lighting” scene.

The plot is equally as formulaic; it’s all about the protagonist and his buddies and the perennial struggles against authority. In the case of “Porky’s,” “authority” comes in the form of overweight gym teachers and morbidly-obese brothel owners.  Naturally, “Hollywood Air Force” replaces those with the “out-to-get-everybody” Congressman Ernest W. Balljoy (played by Graham Jarvis) and the stoogish Sergeant Elroy Burdge (played by Vic Tayback). 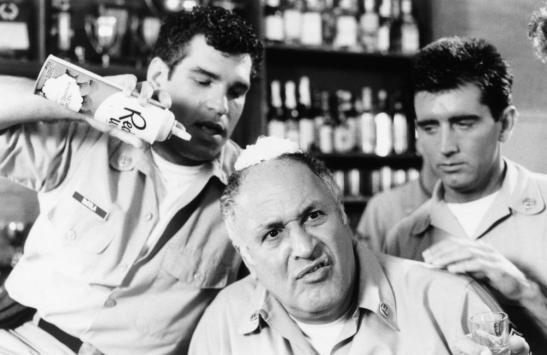 Set in the height of the Cold War in 1961, “Hollywood Air Force” revolves around an Air National Guard unit based in Southern California comprised of an exceptionally not-very-military group of misfit Hollywood actors, writers, stuntmen, make-up artists, and various studio personnel. The one thing they all in have in common is they joined the Air National Guard in order to avoid being drafted into full-time active military service; hence the alternative title “Weekend Warriors.”

The leader of this group of misfits who when not spending his weekends as part of the California Air National Guard’s 73rd Transport Wing is a Hollywood screenwriter named Vince Tucker (played by Chris Lemmon…yes, he’s the son of Jack...). 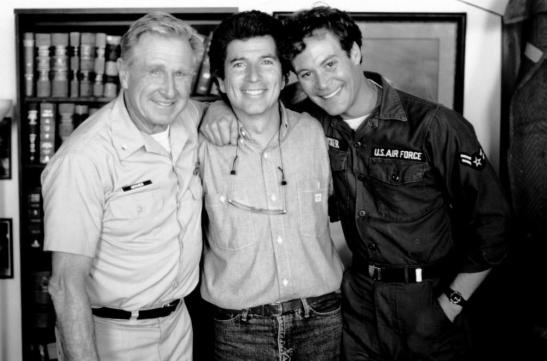 Flyer Tucker and his band of merry airmen fall into disfavor with the visiting Congressman Balljoy when he walks into some of their shenanigans during an inspection of the 73rd’s base. As a result, Balljoy announces in a national press release that the 73rd is ready to be called up for active Air Force duty to meet a looming threat as the Soviets are actively building the Berlin Wall.

However,it is Balljoy’s intent to have the 73rd not only out of his district, but sent to an isolated Pacific island. To avoid this, the unit must pass a full Air National Guard readiness inspection; otherwise they will be called up to active duty and lose their status as “Weekend Warriors.” (Yeah, I know that doesn’t make much sense. You would think failing the inspection would get them sent somewhere for training, but that’s one of several reasons why this is a bad movie.)

But this is where they put the “Hollywood” in “Hollywood Air Force.” Led by Tucker, the men of the 73rd come up with a plan that will thwart Balljoy and insure they remain in California. They use their connections to hire an entire Hollywood production company using it’s “magic” to portray the 73rd as a top-notch transport unit.

The show is a success, Tucker and the 73rd dazzle the Air Force brass, Congressman Balljoy and his guest, a stone-faced Romanian ambassador, whose presence is another thing which makes no sense. Balljoy fully expected the 73rd to be the Air Guard’s answer to the Keystopne Kops, so why would you have him there knowing full well he would report back to the Soviets what a bunch of stumble-bums the American military was?

Here’s the bottom line. If you can get past the stuff that just doesn’t add up, and if you want to laugh at the same kind of stuff you did when you were 12, this movie won’t disappoint.

If nothing else, you can get a few chuckles out of the 73rd’s commanding officer, Colonel Archer…he’s basically Lloyd Bridges reprising the “picked the wrong week to quit smoking guy” from “Airplane!” spiced with a few dashes of “Colonel Klink.”

“The Luftwaffe…the Washington Generals of the History Channel” ~ Homer Simpson

At first, this may sound strange, but there’s an art to being a professional loser. After all, nobody sets out to lose every night. The most inept sports teams throught history all had one thing in common. Be they the 1962 New York Mets, the 2008 Detroit Lions, or the 1972 Philadelphia 76ers just to name a few…well, they all had one thing in common. They were all trying to win.

You can’t say the same for the Washington Generals. For the better part of seven decades, the Generals’ job has been to play the foil to the clown princes of basketball, the Harlem Globetrotters. Granted, there was a script; the Generals weren’t supposed to win. They were the “straight man,” the “Abbott” the the Globetrotters’ “Costello.” The trick was there had to be enough legitimate basketball to make the gags work. The Generals would run up and down the floor with the Globetrotters and hit their share of shots for forty of forty-eight minutes, the other eight ear-marked for the Globetrotters’ half-court heaves, dribbling wizardry, the trademark confetti and ice-bucket tricks, all preceded by the passing-drill warm-ups to the dulcid tones of “Sweet Georgia Brown,”

A Harlem Globetrotters “game” was a bit like the basketball version of professional wrestling in terms of being more entertainment than sports and having a pre-determined ending.  But because it was basketball, maintaining the illusion of the game being somewhat “real” required the Washington Generals to look like they were trying to win when everybody expected they wouldn’t.  In fact, nobody lost more consistently than the Washington Generals or their various aliases (Boston Shamrocks, Atlantic City Seagulls, and Baltimore Rockets to name a few).  Regardless of name, they  have lost to the Globetrotters more than 17,000 times since 1952. The Generals long-time player/coach “Red” Klotz used to compare his team to Ginger Rogers; they had to keep up with the greatness of Fred Astaire, except doing it backwards and in heels.

It so happened that this would be the day the Generals (playing as the Jersey Reds) played a tremendous game. The had one of those days where everything went their way; they couldn’t miss shots if they tried. Next thing you know, they were leading the Globetrotters by 12 points with only a few minutes left in the game.  In an attempt to keep to the script, the Globetrotters mounted a comeback to take a 99-98 lead with only a few seconds left on the clock.

The Reds in-bounded the ball to “Red” Klotz, their 50-year old player/coach, who promptly tossed up a two-handed set shot that clanked around the rim, then dropped in to give the Reds a 100-99 lead as the buzzer sounded.

But much like a rigged Chicago election (or when the U.S. men’s basketball team got robbed in the gold medal game in the 1972 Olympics), there was some shenanigans involved in adding time to the clock to give the Globetrotters a chance for a last-second shot.  But despite being given several opportunities, the Globetrotters’ other main star Meadowlark Lemon bricked a bunch of close-in hook shots at the buzzer.  Finally, they ran out of reasons to extend the game without making it plainly obvious they were just trying to get the win for the Globetrotters, and the Reds/Generals were finally winners. The popular story is the crowd booed and children cried when the Globetrotters lost.

Klotz passed away in 2014, and despite being asked several times, he never admitted whether he was actually trying to make that shot.  It matters little, because for that brief moment in 1971, The Washington General conquered the Harlem Globetrotters’ world.

Sometimes being bad is the point; it takes talent to be reliably bad.  Just ask Bert Convy or the Washington Generals.