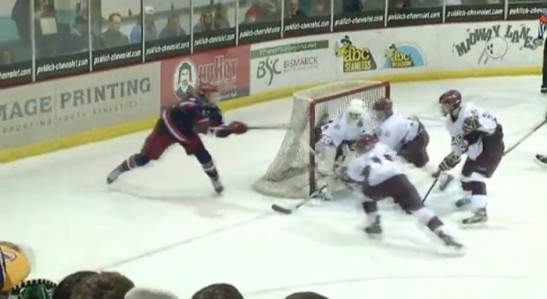 This goal by NHL propsect Alec Rauhauser of Bismarck Century High School was not only a classic “What the fuck was that?” moment, it actually made #2 on ESPN SportsCenter’s Top 10 Plays on Wednesday. For those of you that are hard-core hockey fans, this goal might look a wee bit familiar.

I don’t know about you, but to me it sure looks like that sick-ass goal Michigan Wolverine Mike Legg hung on Goldy F. Gopher back in the day. Rauhauser is drawing the attention of pro scouts with his line going into this game of 19 goals, 26 assists, 45 total points, and that goal helped Century beat cross-town Bismarck High 5-4 in overtime.

While that goal was pretty sweet, I can’t like it because far too many years ago, I was a BHS guy. But, then again, I’m hoping this kid was just living a dream; getting a chance in a real game to re-enact a moment every kid does in his back yard. I would think for a hockey player, scoring that Legg goal had to be high on the list. In comparison, my “Sandlot” age friends weren’t hockey players; but playing “pitch and catch” in his back yard, I can’t imagine how many times my best friend Doug threw Strike Three in the bottom of the ninth to win the World Series…and he probably can’t tell you how many times I dropped Strike Three and had to gun down the runner at first…thus saving his perfect game.

Doug is also the witness to my then-infamous “Century Sucks” chant at a state tournament basketball game. Whether it is the NFL or North Dakota high-school sports, fuck the Patriots.