Last week, I said the College Football Playoff poll was just another stupid poll put together by people who think they know something about college football. I still say that.  The difference this week is I’m announcing my list first, because I don’t need to have a bunch of silly debate over who is better than who, because I actually watch college football.

Last week, I said any list proclaiming to tell you who is good in college football this year which includes Notre Dame in the top ten is simply fraudulent.  This week, there’s another monstrous misperception which needs to be addressed.  It is summed up nicely in the following picture. 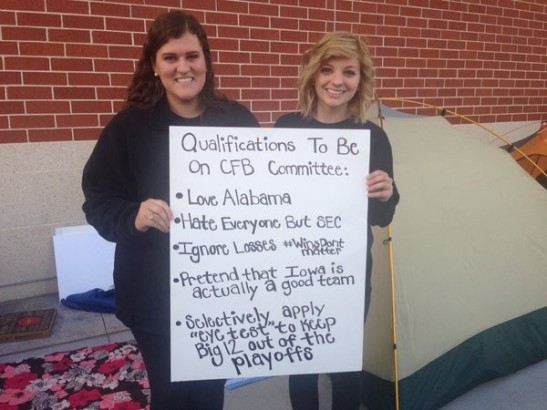 While I can appreciate the sentiment of calling out the frauds at the CFB Play-Off, there’s a massive load of Alanis Morrisette-style irony in this observation coming from what I must assume are fans of the Big 12. Let’s break this sign down:

Well, I don’t.  In fact, I’m on record listing the Crimson Tide in an article I wrote about famous rivalries in which I hate both sides. But, I have a stead fast rule about giving credit where credit is due.  While I wish all those houndstooth-hat wearing mouth-breathers in Tuscaloosa would all get a case of nuclear-tipped genital herpes, there’s really no denying the team they are cheering is the best in the country.

I’m not sure which way to go with this one, so I’m guessing this is all about Big 12 butt-hurt about getting left out of the play-off last year, largely because they don’t have a conference championship game, which is a direct result of two Big 12 teams defecting for the greener pastures of the SEC.

The sad reality is if the Big 12 had such a game last year, it would have been TCU and Baylor, and the winner would have more than likely been in the play-off in front of Ohio State.  The reason is because the CFB committee is very much an “out of sight, out of mind” organization.  Every week is an exercise in the “eye test,” and if they don’t see you, passing the eye test becomes harder than passing a kidney stone covered in Gorilla Glue.

I’m on record discounting the value of the won-loss record as a be-all, end-all measuring stick.  The easiest way to describe this:  Line up the one-loss Alabama against the newly-defeated Baylor.  It wouldn’t take long to see the Tide be a two-touchdown favorite in that tilt. We all know that.

4) “Pretend That Iowa Is A Good Team”

I’m not sure what drives the Iowa shot here, but there’s really no need to pretend the Hawkeyes are good.  It’s probably because the Iowa offense is the antithesis of what Big 12 fans are used to seeing.  Instead of filling the skies with footballs, Iowa features a two tight-end, grand-and-pound approach which has to irritate the shit out of Big 12 fans.  Iowa wins games in a somewhat boring fashion scoring less points than even a bad Big 12 team does in a quarter, but unlike a bad Big 12 team, they win.

Um, yeah…So if you could stop being so stupid…That’d be great.  First, refer back to my comment on the championship game issue. Then consider the fact that the two teams you’ve been selling as the best in the Big 12 have both been recently publicly de-pantsed.

But fret not, Big 12-ers…It’s very possible that the winner of the Oklahoma-Oklahoma State “Bedlam” game makes the Dubsism Play-Off.  Not to mention, the two teams with the biggest rises this week happen to be from what conference?

Having said all that, here’s this week’s Official Dubsism College Football Play-Off Rankings.

1) Coming In This Week

Bielema: Keep your hands away from his mouth while he’s feeding.

Honestly, this team without a healthy Vernon Adams didn’t even make the Dubsism radar.  But beating Stanford on the road is a major statement.  Not to mention, their three losses are all to teams that don’t suck (Michigan State, Utah, and Washington State).

2) Dropping Out This Week

A fade-job in powder blue.  In a perfect world, UCLA shouldn’t have to sweat Washington State.  It’s not a perfect world.  It’s actually a world where the Cougars don’t suck, and the Bruins kinda do.

Yeah, they’re 8-2, but they tried hard to lose to Purdue.

Alabama is the best team in the country, period.

Don’t look now, but the B1G Ten might just be able to make a claim as the best conference top-to-bottom in the country.  You two dumb chicks and your sign can suck on that “SEC Love” bullshit.  The SEC East is a landfill.

A note for all you people who call me a “Clemson Hater.”  Clemson is the classic of the “Lucy holding the football ” team; meaning they always get you to believe they are better than they really are, then they pull the rug out from under you the minute you buy them.  Eastern writers love to over-rate the ACC; and the only team in that conference which ever matters is Florida State when they are good, and this year they aren’t.