“Dawn Patrol” is not on my list of essential films.

NOTE: This installment of Sports Analogies Hidden In Classic Movies is being done as part of the The Suave Swordsman: Basil Rathbone Blog-A-Thon being hosted by Pale Writer.  This is the fourth time she has allowed me to participate in one of her events. It’s a good thing she’s adorable, because allowing my nonsense back that often is indicative of a serious judgement issue.

Forget about my twaddle. If you want to see the opinions of people who have talent, just click here:

Set in France in 1915 during the height of the First World War, “Dawn Patrol” centers on Major Brand (played by Basil Rathbone) the squadron leader of 59 Squadron Royal Flying Corps and his adjutant Phipps (played by Donald Crisp). As they await the return of the dawn patrol, it’s easy to see Brand is near his breaking point.  His unit has been suffering heavy losses; 59 Squadron has lost 16 pilots in the last two weeks.  Making matters worse, almost all of them were replacements with little training and no combat experience.

Captain Courtney (played by Errol Flynn) and his friend “Scotty” (played by David Niven) mange to make it back to the aerodrome, but two of the replacements are not so lucky. Another young pilot Hollister (played by Peter Willes) is deep in grief having just witnessed the death of his best friend. The survivors repair to the bar, but despite Courtney’s best efforts to console Hollister, he collapses under the weight of his grief.

Brand gets orders for a major mission to take place on the following day. When Courtney tells him that A Flight lacks a sufficient number of men. Brand assures him more replacements are coming. Four green pilots arrive; Brand sends on the mission the two with the most flying hours.  Of all the pilots sent on the mission, only four return.  Not only that, Scotty has been lost along with the two new men.  Things get heated when British troops bring in the German believed to have shot down Scott.  Courtney has to fight his initial rage thinking he is facing the man who killed his friend; this subsides when Brand them it was Courtney who shot down the German.  Then as Hollister tries to attack the imprisoned German, the assumed-to-be-dead Scotty appears.

Now, its B Flight’s turn to take it in the teeth. This group’s leader is wounded but manages to pass the word that the feared German von Richter is now their foe.  At that moment a German fighter flies low over 59 Squadron’s aerodrome dropping a pair of trench boots. Attached to the boots is a taunting note telling the British pilots they will be safer if they on the ground.  Major Brand warns his men this is a tactic designed to lure the inexperienced pilots into a scurried retaliation, where they can fall victim to the superior German aviators. 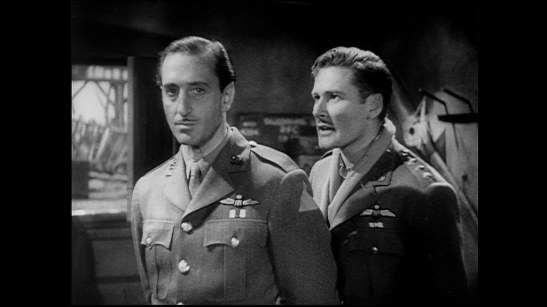 In an attempt to prevent even more slaughter, Major Brand forbids any take-offs without orders. Courtney and Scotty disobey this order.  They swipe the dropped boots from Brand’s room and soar into the dawn mist with them. Upon reaching von Richter’s airfield, they destroy many of the German aircraft while they are sitting on the ground and shoot down two which try to take to the air. With the destruction complete, Courtney then drops the boots back on the Germans.  While their attack on the Germans is quite successful, Courtney and Scotty have several brushes with death getting back to their side of the lines.

At first, Brand is furious at Courtney and Scotty for their disobedience, but that quickly falls by the wayside he is recognized for the success of the attack and subsequently promoted.  In what almost seems like an act of revenge, Bland promotes Courtney to be the new squadron leader of 59 Squadron.  He does this knowing that in no time at all, Courtney will be forced to adopt all the characteristics in Brand he rebelled against.

It also takes no time for Courtney to start learning about the pressures of command.  Scotty’s younger brother Donnie is posted to 59 Squadron as a replacement pilot.  Fearing for his Donnie’s life, Scott pleads with Courtney for a few days to train him.  While Courtney denies this request stating there can be no exceptions. unbeknownst to his men, Courtney asks his superiors for extra time to train his new pilots.  This request is denied, and the next morning Donnie is shot down by von Richter.  Naturally, Scotty blames Courtney for his brother’s death.

The next day, Brand gives Courtney orders for a very important and exceptionally perilous mission.  A pilot must fly alone 60 miles behind enemy lines to bomb a huge munitions dump.  Since Courtney is now the squadron leader, Brand forbids him from flying the mission.  Against his better judgement, Scotty volunteers. This leads to a reconciliation between Courtney and Scotty.

In turn, Courtney keeps the drinks flowing until Scotty is well past the ability to fly.  Courtney defies Brand again and flies the mission himself.  He succeeds in destroying the German munitions, but on returning to 59 Squadron’s aerodrome, Courtney is intercepted by von Richter.  In the resulting dogfight, Courtney shoots down two German planes, one being von Richter.  But Courtney is then killed by another German.  Courtney’s death leaves command of 59 Squadron; the film ends with Scotty lining up his depleted unit and telling A Flight to be ready for the dawn patrol.

To me, two other war movies I’ve covered in this series borrowed somewhat from this one; “Fighter Squadron” and “Command Decision.” But “Dawn Patrol” has a hidden sports analogy all it’s own. Basil Rathbone’s “Major Brand” faces a unique balancing act. On one hand, he’s a military commander who has to send men into harm’s way. On the other hand, he has to show concern for the welfare of those men. Errol Flynn’s “Captain Courtney” learned this lesson as well.

In the sports world, there’s no better example of this balancing act than a boxing trainer. In the world of the “Sweet Science,” the role of the trainer.  In fact the term “trainer” doesn’t really do the role justice.  A good boxing trainer is combination of a mentor like an older brother, a source of stability like a father figure, your favorite grade school teacher, all rolled into a skin made of the disciplinarian of a Marine Corps drill instructor. In other words, were talking about a tough guy who teaches, inspires, and looks out for his people.

They may not have realized it, but both “Major Brand” and “Captain Courtney” found themselves in a role incredibly similar to an “old-school” boxing trainer.  To that end, there was no better than Constantine “Cus” D’Amato. The things that made D’Amato the best at his craft are the very same which made Major Brand so adept with the aforementioned balancing act. Make no mistake, “Cus” D’Amato was the best “corner” man ever.

First, there was the role as trainer.  One can only imagine what Brand could have done with his men had he been given time.  When D’Amato had time, he helped create some of the greatest boxers the sport has ever seen, such as Floyd Patterson and José Torres, both of whom went on to be inducted into the International Boxing Hall of Fame.  But the better comparison might just be when “Cus” D’Amato ran out of time.

In the early 1980s, D’Amato was key to the development of a young phenom named Mike Tyson.  D’Amato died in 1985, but his influence made Tyson the youngest heavyweight champion ever at age 19; he remained the most dominant fighter in the sport until the calamitous Buster Douglas fight in 1990. But after what was one of the greatest upsets in the history of sports, Tyson was never the same.  He went from one of the sports greatest champions to a major player in boxing’s decline. If “Cus” D’Amato had lived 6 or 7 more years, the Douglas fight probably has a different ending, and Tyson likely never takes the tumble he did.

Another thing that Major Brand and “Cus” D’Amato have in common is the understanding that be they boxers or pilots, great ones aren’t born…they are made. Specifically to Major Brand’s wishes for more time to train his men, he wanted to teach them how to keep themselves alive.  With every fighter he trained, “Cus” D’Amato taught every fighter how to defend themselves first.  As a result, D’Amato became synonymous with the “peek-a-boo” style of boxing.  This style is marked by the fighter holds his gloves close to his cheeks and pulls his arms tight against his torso, which offered the fighter maximum protection.

But the criticism of this style was the false belief that an efficient attack could not be launched from it. Just see the Mike Tyson video above; that should be all the debunking of that idea you need.

The other thing Brand and D’Amato clearly had in common; they both cared about their fighters.  Again, it didn’t matter whether they were fliers or boxers, neither Brand or D’Amato wanted to invest time and effort into somebody just to see them be slaughtered.

Finally, both Brand and D’Amato left strong leaders in their wakes.  Both Courtney and “Scotty” displayed all the characteristics of solid leaders, and several of D’Amato’s training disciples like Teddy Atlas and Kevin Rooney became formidable figures in the sport themselves.

While the end of “Dawn Patrol,” we don’t ever really get to know where the careers of “Scotty” and Brand end up; Colonel Brand, General Brand, et cetera… But we do know where D’Amato’s culminated..in the International boxing Hall of Fame and a New York City street with his name on it.

BONUS: In the near future, there will be a movie coming out detailing the relationship between “Cus” D’Amato and Mike Tyson.  “Cus and Mike” stars Anthony Hopkins as D’Amato.  But this isn’t the first time in which “Cus” D’Amato will be played by Anthony Hopkins.  That’s not the first time the life of “Cus” has seen the screen; in 1995 HBO made a film called “Tyson” in which George C. Scott played him.

You know you’ve led an interesting life when it takes not one, but two Academy-award winners to play you.

This entry was posted on June 16, 2020 by J-Dub in Movies, Sports and tagged Boxing, Classic Movies, Cus D'Amato, Mike Tyson, Sports Analogies Hidden In Classic Movies.