Terms like “old school” get tossed around too much. Had you tuned in any college football game in the past four years and you would have heard this phrase to describe Tim Tebow. But this doesn’t do justice to some of the guys who played the game before Tebow. We just lost one of the greats of the era when football wasn’t a big money sport; an era when sports still stayed in perspective. 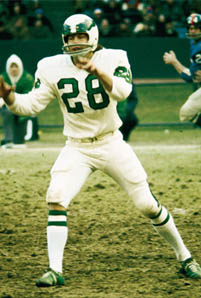 With the passing of Tom Brookshier, perhaps we should recognize that there are some players for whom there are no “old schools,” rather perhaps a set of values from which we might all draw. Brookshier was an All-Pro defensive back for the Philadelphia Eagles, later becoming a long-time broadcast announcer of the NFL.  The Philadelphia Inquirer remembered him by pointing out what set Brookshier apart.

Originally a 10th round draft pick from Colorado, Brookshier made an immediate impact with eight interceptions during his rookie season of 1953. Then, after a two-year stint in the Air Force, the defensive back returned to the Eagles and twice earned All-Pro honors – first in 1959, and again in 1960 as a member of the NFL championship team.

Keep in mind that after bursting onto the NFL scene as a rookie, Brookshier left to join the Air Force.  He served his two years, then came back to the Eagles where he established himself as one of the premier defensive backs in the game, leading the Eagles to their sole NFL championship. Granted, Brookshier was not unique in putting service to his country before his athletic career, but it is a rarity. Outside of Pat Tillman and a few others, it’s difficult to imagine today’s athletes doing the same. It’s simply a different era.

This entry was posted on January 31, 2010 by J-Dub in NFL and tagged NFL, Philadelphia Eagles, RIP, Tom Brookshier.