Is Chipper Jones a Hall Of Famer?

As much as we don’t want to say it, we may have seen the last of Larry Wayne “Chipper” Jones. The Atlanta Braves said on Thursday the 38-year-old third baseman tore his anterior cruciate ligament, and that the injury requires surgery.

Repairing a torn ACL usually requires a recovery period of six months, which in theory could have Jones ready for Opening Day 2011 — if Jones decides to return. Even before ending this season sooner than expected, Jones had already been hinting this season would be his last.  Torn ACLs are not an easy injury from which to make a recovery, let alone after 16 major-league seasons. 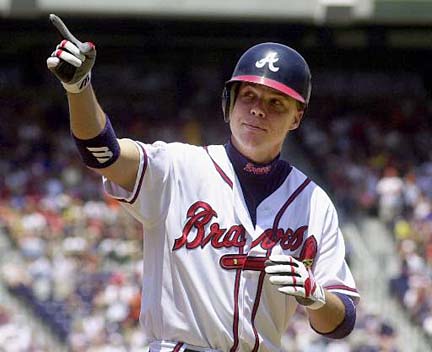 So the question is: If we have indeed seen the last of the Chipper Jones era in Atlanta, is the long-time Brave a Hall-of-Famer? Take a look at his resume for baseball immortality:

You be the judge.

This entry was posted on August 12, 2010 by J-Dub in Baseball and tagged Atlanta Braves, Baseball, Chipper Jones, Hall of Fame, Polls.

You can have your own Christmas concert because WE'RE NOT GONNA TAKE IT!
Irony: When "Boozy Betty" gets you a Liverpool FC bourbon glass (not yet unwrapped: a Modelo beer t-shirt).
My wife calls my wardrobe "a monument to boring," so she decided to add a little "Flair" to it.