Your Colin Cowherd Moment of the Day – Rex Ryan vs. Tony Dungy: A Study In Leadership Styles

The other day, a flap came about between former NFL head coach Tony Dungy and current New York Jets head coach Rex Ryan because Ryan “swears too much.” Today, ESPN’s Colin Cowherd asserted what he thinks the core of the issue is. Cowherd’s belief is that swearing when used “sparingly” has an impact; that volume works, and aggression wins. In other words, we are tapping on the old adage that “nice guys finish last.”

Lets’ compare and contrast. Dungy is a soft-spoken guy who has relied on his “nice guy” image for the majority of his career. Ryan is brash, vocal, and undeniably charismatic. Being a “nice guy” has provided cover for Dungy’s having become a self-appointed crusader who out of one side of his mouth is willing to be a bible-thumping self-moralizer while out of the other he is espousing the virtues of cretins like Michael Vick. In contrast, Ryan is a guy with no pretenses who has players e-mailing ESPN saying they wish they could play for him.

In fact, Jets linebacker Bart Scott offered an impassioned defense of Ryan, claiming Dungy should mind his own business and turn the channel if he takes exception to Ryan’s style.

“If you don’t want your kids to see Andrew Dice Clay or Bernie Mac, tell them to go see Bill Cosby,” Scott told ESPNNewYork.com. “You can’t suggest for somebody to tone it down or say, ‘He wouldn’t coach for me’ and ‘I wouldn’t hire him.’ Why are you farming someone else’s land? Farm your own land.”

This is the part where it is important to notice that Dungy doesn’t draw such visceral defense. Instead, supporters of Dungy talk of what admiration they have for his “Quiet Strength,” what respect they have for him.  Ryan get people who are willing to “throw down” for him.

In my non-blogger life, I’ve been a manager or a consultant for nearly 15 years. True leaders aren’t born, they are made; but neither being soft-spoken or being a guy who drops F-bombs are indicators of who makes a good leader. Dungy is on record as saying he wouldn’t hire “a guy like that,” whereas Ryan says “just because somebody cusses doesn’t make him a bad person. Just because a guy doesn’t cuss doesn’t make him a good person. I’ll stand by my merits.”

It all begs the question “What are the characteristics of a good leader?” I’m a firm believer that personality matters little; “brash and vocal” can lead just as well as “quiet strength.” I’ve also never believed in success as a measure of a leader; teams have succeeded with weak leadership, and history is full of great leaders that had dysfunctional teams. Rather, I’ve always been a fan of a system for determining leadership qualities developed by FedEx. It is their belief that the best leaders share nine personal attributes – which they specifically define.

Just for fun, let’s settle the Ryan vs. Dungy debate with a hypothetical exercise supposing I am going to hire one of them, and that I am going to score them according to FedEx’s 9 Faces of Leadership.

1) Charisma – Instills faith, respect, and trust. Has a special gift of seeing what others need to consider. Conveys a strong sense of mission.

This one goes to Ryan hands down. Ryan, while expressing it in a manner some find coarse and brutish, has his team showing an undeniable singularity of purpose. Meanwhile, Dungy exudes an air of “knowing what’s right;” sanctimony breeds contempt, not leadership.

2) Individual Consideration – Coaches, advises, and teaches people who need it. Actively listens and gives indications of listening. Gives newcomers a lot of help.

While I give credit to Tony Dungy for trying to help Michael Vick, it is only partial credit because he was nowhere to be found during Vick’s latest brush with the “dark side” stemming from the shooting incident at his 30th birthday party. True mentors switch to active mode when they see their mentee in trouble. The fact that the New York Jets are a fashionable pick to go deep in the playoffs with a roster predominantly populated with younger players speaks to Ryan’s ability to understand and teach.

3) Intellectual stimulation – Gets others to use reasoning and evidence, rather than unsupported opinion. Enables others to think about old problems in new ways. Communicates in a way that forces others to rethink ideas that they had never questioned before.

Dungy wins this category, not because I think he has a more intellectual approach than Ryan, but because I believe getting football players even to consider things from a Christian-centric point of view embodies “communicates in a way that forces others to rethink ideas that they had never questioned before.”

4) Courage – Willing to stand up for ideas even if they are unpopular. Does not give in to pressure or to others’ opinions in order to avoid confrontation. Will do what’s right for the company and for employees even if it causes personal hardship.

This is a tough category. One on hand, Dungy going to bat for Michael Vick in puppy-hugging liberal America took major-league guts, but I always got the whiff Dungy did it for his own gain, in much the same way that a defense lawyer would gain fame for defending Osama Bin Laden. On the other hand, Ryan is willing to show exactly who he really is in a country where strong leaders are out of fashion, even in the NFL.

This could have been another “tie” category, except for one thing. I’ve never known a devoutly religious person who is willing to make a move without consulting God, the “boss,” or whomever else scares them.

6) Flexibility – Functions effectively in changing environments. When a lot of issues hit at once, handles more than one problem at a time. Changes course when the situation warrants it.

This is another category in which a devoutly religious guy isn’t going to score well. Flexibility doesn’t factor for a guy who lives by ten inviolable commandments, which lead to a whole host of similarly inviolable “God told me I couldn’t” rules. As much as nobody wants to admit this, there are times in the heat of battle, one must be willing to kick a ball back on to the fairway.

7) Integrity – Does what is morally and ethically right. Does not abuse management privileges. Is a consistent role model.

While it is hard to beat a devoutly religious person in this category, Ryan proves that a “guy who cusses” can make it viable. But Dungy is nothing if he is not consistent.

8 ) Judgment – Reaches sound and objective evaluations of alternative courses of action through logic, analysis, and comparison. Puts facts together rationally and realistically. Uses past experience and information to bring perspective to present decisions.

All I had to hear to know which way I would value this category came from Dungy when he said “I wouldn’t hire someone like that” based on a television appearance by Ryan that Dungy admits he didn’t even see. Going with second-hand information rates an instant “fail” here.

9) Respect for others – Honors and does not belittle the opinions or work of other people, regardless of their status or position.

In all honesty, it is hard for me not to rule against Dungy in this category considering he wanted to the commissioner of the NFL to impose some sort of sanction against Rex Ryan simply because he used language Dungy doesn’t like. 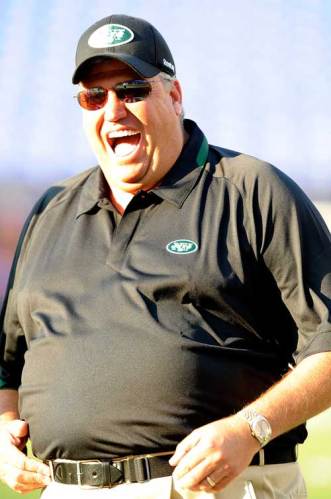 2 comments on “Your Colin Cowherd Moment of the Day – Rex Ryan vs. Tony Dungy: A Study In Leadership Styles”