George “The Grand Old Man” Blanda passed away yesterday and the football world certainly feels a huge loss. From his days as the son of a Czech-born Pennsylvania coal miner to the University of Kentucky under legendary head coach Paul “Bear” Bryant, to the NFL, the AFL, and the Hall of Fame, Blanda left a mark on the game that was uniquely his yet universally great.

Blanda began his career as a quarterback and placekicker at the University of Kentucky. Coach Bryant arrived in Lexington in Blanda’s his sophomore year, following a 1–9 season. Bryant transformed Blanda and the Wildcats into a 7-3 team each of the next three years. Blanda was the starting quarterback in his last two seasons at Kentucky compiling 120 completions for 1,451 yards and 12 touchdowns. Recalling the time he met Bryant, Blanda said: “I thought this must be what God looks like.”

Blanda’s professional career started for $600 in 1949. While the Chicago Bears primarily used Blanda as a quarterback and placekicker, he also saw time on the defensive side of the ball at linebacker. It would not be until 1953 that Blanda would emerge as the Bears’ top quarterback, but an injury the following year effectively ended his first-string status. For the next four years, he was used mostly in a kicking capacity.

Actually, Blanda retired after the 1958 NFL season because of Bears owner George Halas insistence of only using him as a kicker, but returned in 1960 upon the formation of the American Football League. He signed with the Houston Oilers again as a quarterback and kicker. He was derided by the sports media as an “NFL Reject,” but he went on to lead the Oilers to the first two championships in AFL history, and he was the All-AFL quarterback and won AFL Player of the Year honors in 1961. During that season, he led the AFL with 3,330 passing yards and a record 36 touchdown passes. That record, although tied by the Giants’ Y.A. Tittle in 1963, was not surpassed in pro football until 1984 when the Dolphins’ Dan Marino tossed 48 scores.

In 1962, Blanda  had two 400-yard passing days for the Oilers;  a 464-yard, 4 touchdown effort against the Buffalo Bills and a 418-yard, 7 touchdown blasting of the New York Titans. Blanda threw at least 4 touchdowns 13 times during his career and once attempted 68 passes in one game. Blanda would have easily been comfortable in today’s pass-happy game; from 1963 to 1965, Blanda led the AFL in passing attempts and completions, and ranked in the top ten for attempts, completions, yards and touchdowns during seven consecutive seasons. A four-time member of the American Football League All-Star team, Blanda’s already-long career seemed over when he was released by the Oilers in 1967. However, the Oakland Raiders signed him later that year, seeing his potential as a contributing backup passer and a dependable kicker.

During the 1967 season, Blanda’s kicking saw him lead the AFL in scoring with 116 points. The Raiders went on to compete in Super Bowl II, but the following two seasons ended in heartbreak as they lost in the AFL Championship games both times.  In 1970, Blanda was released during the preseason, but bounced back to establish his 21st professional season with one of the most dramatic comebacks in sports history. Beginning with the game at Pittsburgh, Blanda put together five straight clutch performances.

Against the Steelers, Blanda threw for three touchdowns in relief of an injured Daryle Lamonica. One week later, his 48-yard field goal with three seconds remaining salvaged a 17–17 tie with the Kansas City Chiefs. Against the Browns, Blanda once again came off the bench to throw a touchdown pass to tie the game with 1:34 remaining, then kicked a 53-yard field goal with three seconds left for the 23–20 win. Immediately after the winning field goal, Raiders radio announcer Bill King excitedly declared, “George Blanda has just been elected King of the World!” In the Raiders’ next game, Blanda again replaced Lamonica in the fourth quarter and connected with Fred Biletnikoff on a touchdown pass with 2:28 remaining to defeat the Denver Broncos. The streak concluded one week later when Blanda’s 16-yard field goal in the closing seconds defeated the San Diego Chargers, 20–17.

In the AFC title game against the Baltimore Colts, Blanda again relieved an injured Lamonica and had a superb performance, completing 17 of 32 passes for 217 yards and 2 touchdowns while also kicking a 48-yard field goal and two extra points, keeping the Raiders in the game until the final quarter, when he was intercepted twice. At 43, Blanda became the oldest quarterback ever to play in a championship game, and was one of the few remaining straight-ahead kickers in the NFL. 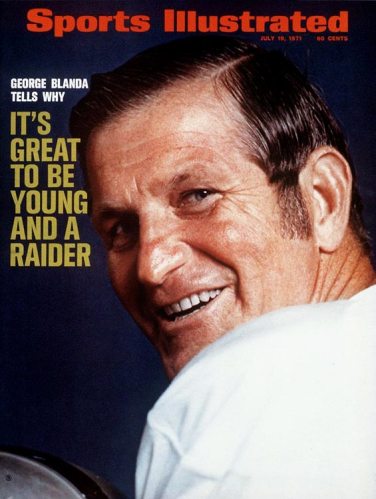 Chiefs’ owner Lamar Hunt said, “Why, this George Blanda is as good as his father, who used to play for Houston.” Although he never again played a major role at quarterback, Blanda would serve as the Raiders’ kicker for five more seasons. Blanda played in his last game at Pittsburgh’s Three Rivers Stadium on January 4, 1976, in the AFC Championship Game at age 48. Blanda went out on a 41-yard field goal and one extra point as the Raiders lost to the Steelers 16-10.

In later years, Blanda would remain a strong supporter of AFL heritage, saying “That first year, the Houston Oilers or Los Angeles Chargers could have beaten the NFL champion (Philadelphia Eagles) in a Super Bowl.” Blanda said further “I think the AFL was capable of beating the NFL in a Super Bowl game as far back as 1960 or 1961. I just regret we didn’t get the chance to prove it.”

Blanda finished his 26 professional football seasons having completed 1,911 of 4,007 pass attempts for 26,920 yards and 236 touchdowns. Blanda also held the NFL record for most interceptions thrown with 277, until Brett Favre broke in 2007. He rushed for 344 yards and 9 touchdowns on the ground, kicked 335 of 641 field goals, and 943 of 959 extra points, giving him 2,002 total points. Additional stats include 1 interception, 2 kickoff returns for 19 yards, 22 punts for 809 yards, and 23 fumble recoveries. Blanda holds the following professional football records:

Vaya con Dios, Mr. Blanda…there will never be another like you.