I’m not going to dance around the issue; I’m just going to come out and say it.  I’m not buying Cam Newton’s story.

I want to buy it, insofar as the Cam Newton story has all the elements of a first-class sports movie.  It easily could be the story of a kid who defies all the odds to become the Heisman trophy winner on the shoulders of one the most incredible season’s anybody has ever seen a college player have. Toss in his charisma and his “Madison Avenue” smile (trust me, if Cam skates on all this stuff and becomes a star in the NFL, you are going to see that smile selling all kinds of stuff), and its a box-office bonanza waiting to happen. 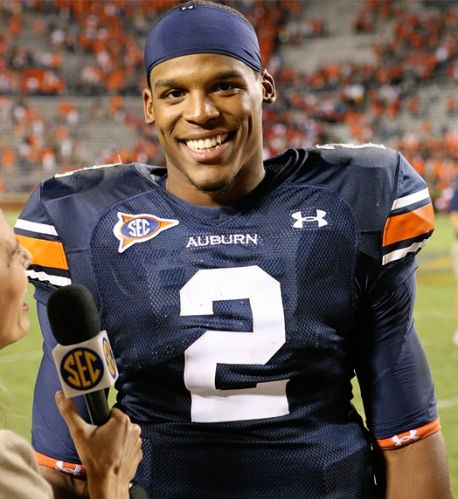 Seriously, Cam, do you really expect me to believe you had no idea what your father was up to? Granted, there’s still a lot of this story we don’t know. But there are two things we do know.  First, Cam Newton’s father, Cecil, actively solicited cash in return for his son’s services. We also know that something made Cam change his mind about attending Mississippi State in favor of Auburn. He’s on record as saying he wanted to be a Bulldog. There’s even people on record as saying that Cam Newton went to Auburn because “the money was too good.”

There’s a clear contradiction between what all those  other people have said and what Cam has said. Naturally, we’ve hit the point in the story where Cecil Newton, the NCAA, and Auburn aren’t talking. However, there are some nuggets that can be mined from the NCAA’s statement when they re-instated Newton prior to the SEC Championship Game.  Keep the two things we do know in your mind as you read the NCAA’s statement.

When a school discovers an NCAA rules violation has occurred, it must declare the student-athlete ineligible and may request the student-athlete’s eligibility be reinstated. Reinstatement decisions are made by the NCAA national office staff and can include conditions such as withholding from competition and repayment of extra benefits. Newton was reinstated without any conditions.

According to facts of the case agreed upon by Auburn University and the NCAA enforcement staff, the student-athlete’s father and an owner of a scouting service worked together to actively market the student-athlete as a part of a pay-for-play scenario in return for Newton’s commitment to attend college and play football. NCAA rules (Bylaw 12.3.3) do not allow individuals or entities to represent a prospective student-athlete for compensation to a school for an athletic scholarship.

In conjunction with the case, Auburn University has limited the access Newton’s father has to the athletics program and Mississippi State has disassociated the involved individual.

So, we have confirmation there was a price tag on Cam’s services. Cecil Newton did try to get money in exchange for his son’s commitment.That covers Thing #1 that we knew going into this. But there is a big, choreographed dance around Thing #2. Even the NCAA wants to buy Cam Newton had no idea this was happening. That’s the house of cards under which the NCAA is choosing to protect Cam Newton.

I’m not going to go into the whole bit about how this exact sort of stuff got USC put on probation and forced Reggie Bush to surrender his Heisman trophy; that’s an entirely separate issue.  I’m rejecting the notion that Cam Newton didn’t know about this., and I’m being openly skeptical of the NCAA and its motives.  It takes a while to get to my reason, but follow me for a bit; it’s worth it.

Deep down in places they aren’t willing yet to admit, the NCAA doesn’t buy Newton’s story either.  The NCAA knows it has a big problem on its hands, but wants to drag this out until it isn’t a matter of killing an event yet to come (declaring Newton ineligible now and sanctioning the other guilty parties BEFORE a Championship/Bowl Game or vacating Auburn’s season for playing an ineligible player during that same season); rather they would love to use the “magic eraser/retroactive approach” they used with USC, and most recently the Arizona State baseball team.

You can see this when you parse their language. There was no way the NCAA was going to impede the appeal of the SEC Championship, the Heisman, the BCS or anything else happening THIS season, but they are clearly reserving the right to visit their wrath on somebody at a later date. That’s the difference between the term used was “reinstated” and  “cleared.” The proof is in the timeline.

First, the NCAA concludes Part I of the investigation, determining that a violation had occurred.  By NCAA rule, Auburn is then forced to declare Newton ineligible. Auburn then requested his reinstatement, which the NCAA granted. Don’t forget this all takes place in a 48-hour period, and don’t forget this exercise in procedurism is designed for a specific purpose.

The NCAA needs to keep the idea alive that it is committed to the “sanctity of the student-athlete” or whatever bullshit phrase they use to pretend college football isn’t a multi-billion dollar industry. This is why the Newton case present such a problem. Cam Newton is clearly the NCAA’s big box-office attraction this season and they clearly are not going to limit his earning power. However, if they don’t act, they will blow the illusion of amateurism.

This leaves us with an illusion being protected by another.  Now, the NCAA needs you to believe that after an investigation that took months just to get to the end of Part I, all can be resolved in less than two days. Nobody should be advertising the fact the NCAA has been in constant contact with Auburn officials throughout the process, which means Auburn knew what the drill was once the word “violation” made it into an NCAA press release. Hence, the kind of discussion that can easily devolve into multiple volleys of press conferences and even dramatic speeches by attorneys instead became an orchestrated game of bridge, everybody playing the right card in the correct sequence.

Despite the circuitous route, this brings us right back to the importance of the difference between “reinstated” and  “cleared.” To pull off this “illusion within an illusion,” the NCAA needs to be able to play the “if we knew then what we know know” game. That’s why Newton isn’t “cleared.” Because later, after all the hype has died down, the games have all been played, and the awards have all been given, there will be the discovery of some “smoking gun” and Auburn will become the Alabama version of USC, vacated victories and all. The NCAA’s VP of Academic and Membership Affairs leaves that door wide open: “Based on the information available to the reinstatement staff at this time we do not have sufficient evidence that Cam Newton or anyone from Auburn was aware of this activity, which led to his reinstatement.”

Here’s what that means: The NCAA has the dirt on Cecil Newton; there’s hard proof of that. The NCAA knows he demanded money from Mississippi State, but can’t yet prove he made the same demands to Auburn. They are also pretty sure Cam Newton knew all of this, but they also can’t yet prove it.  We all know this is a game not about what you know, rather what you can prove.

Now for the fun part:  Cam Newton can pretend to be the hooker not knowing to whom they have been pimped; the question is who is paying the freight? We all know Mississippi State was solicited, and we all suspect Auburn was as well, but think about this… Remember the NCAA’s  “illusion within an illusion?” “I didn’t know” is what allows this investigation to stretch past the time all the NCAA has made all its money, and it all collapses once Cam Newton says “I knew.”

In short,  Cam Newton’s story always seems to be available to the highest bidder, and I just don’t have the scratch to buy it.