The Dubsism Baseball Post-Season Preview: A Look Back at Yesterday and A Look Ahead To October

I’m just going to come right out and say it…if you didn’t find last night’s baseball drama to be one of the most exciting things you’ve seen since discount warehouse liquor stores, you either don’t like baseball or you have no pulse.

I’m such an old codger that I can remember first-hand the days of Charlie O. Finley, the chain-link outfield fence at Candlestick Park, and Bucky F–king Dent, and I would be lying if I didn’t say that last night was the single-most exciting four hours of baseball I’ve ever personally witnessed.  Being that old geezer, you have to understand this includes Game 6 of the ’75 World Series, Reggie Jackson hitting three homers on three swings against the Dodgers, the ’78 Red Sox-Yankees playoff (hence Bucky F–king Dent), Game 6 of the ’86 World Series, the 1987 World Series (preceded by the August weekend in Milwaukee in which Kirby Puckett supplanted Rod Carew as  my lord and personal savior), Game 7 of the 1991 World Series, and all things Bartman-esque.

But none of those things – not a single damn one of them – involved four games occurring simultaneously which held the structure of the post-season in the balance. The Cards took their game out of the mix early by drubbing the Astros, and it seemed the Yankees had done the same on the grand slam by Mark Teixiera. When Dustin Pedroia put the Red Sox in front of the Orioles with his homer, I don’t think anybody in America saw what was coming in the next few hours. 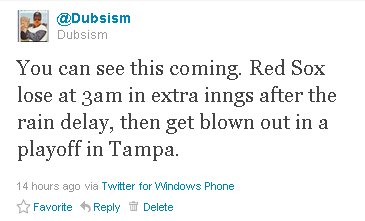 Okay, so I missed on the playoff thing, but after Jon Lester somehow managed to get out of the 6th inning without giving away the ball game despite his complete inability to throw a strike, all you had to do was look into the Sawwwx dugout to see they knew they had just used up their miracle. 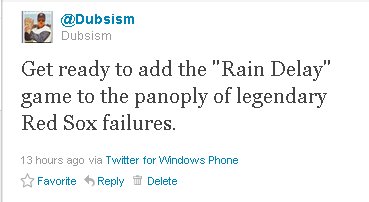 Again, the Orioles just won’t go away, and here comes Jonathan “I can blow that save, Terry” Papelbon.  But just moments before Papelbon has his soon-to-be-infamous meltdown, Dan Johnson has his moment in Tampa.

That’s right, the hero of the moment is a guy who was hitting south of .130 and hadn’t had a major league hit since April. Toss in the fact that he looked completely overmatched on pitches prior to that home run, and one couldn’t help but be reminded of Bernie Carbo.

Next comes the Papelbon catastrophe (raise your hand if you didn’t see it coming…by now it was painfully apparent). This left the only hope for the Sawwwx in a Rays extra-inning loss.

Evan Longoria stroked the Red Sox into the off-season, all while propelling us into what promises to be an incredible post-season. But it also will push us into a discussion about just what happened. 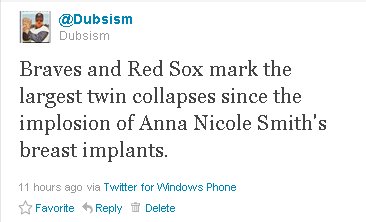 While the Braves collapse is just as embarrassing as that of Boston’s, it simply is more fun to rub some salt in the collective wounds of the Sawwwx nation. See, as an Angels fan, I’ve hated the Red Sox ever since the Dave Henderson homer in the ’86 ALCS.

You should understand that for the rest of us, those of us not fans of the Yankees or Red Yankees, those of us whose teams have spent a decade playing the Washington Generals to east-of-the-Hudson, bloated-payroll Globetrotters…when either team fails, it is the same sort of soul-filling pablum that makes people watch soap operas. We all love to watch the rich and famous stumble.

And after all that, here we are; another October full of post-season baseball. Let’s be honest, most of the crap I said about these teams six months ago was wrong, so why not go for month number seven proving I have no idea what I’m talking about.

Indeed, how many of those things turned out true? Remember when I said the Yankees and the Red Sox were mirror images of each other, and it would be a race between the two to see which collapsed first? Well, the Red Sox waited until September before they folded faster than Superman on laundry day, allowing themselves to get run down by a Rays team that could be this years answer to the San Francisco Giants.

But enough of looking back…let’s look ahead to the post-season. Here are your eight participants and their odds of coming home with a title.

This team is all about the pitching staff, with just enough offense to make it work. It worked to the tune of 100+ wins, and this is the proverbial “team to beat” until somebody does just that. The biggest concern is that in the National League, the team to finish with the best record hasn’t won the World Series since the 1986 Mets, and since the Phillies obviously won’t have the luxury of facing the Red Sawwwx…

The Yankees are the photo-negative of the Phillies; they sport a monstrous line-up and a pitching staff made up of CC Sa-fat-tia and a lot of “not much else.”

Now, it’s time for some equal-opportunity hating: Are you now, or have you ever been a Yankees fan? Are you under the age of 45? Have you ever said “The Yankees sucked when I was a kid, so I’m not of one these new Yankee fans that came along when we started winning again”? If you answered “Yes” to these questions, you are pretentious douche-nozzle and you would be doing the world a favor if you stuck a shotgun in your mouth.

There’s soooooooooo many reasons to hate the Yankees. First, there’s the aforementioned loyalty-less assloafs who think just because the Yankees sucked in the 80′s means they aren’t some dickhead who needs to be on the winning side.  But least there is one less reason to hate them, since that piece of deep-fried monkey nuts known as George Steinbrenner is dead. At least he has a burn-in-hell worthy legacy, like sodomizing New York City out of a billion dollars to build a replica of a 90-year old mausoleum of decency, then filling it with insufferable dickweeds who are now actually proud of their Ruthian douche-baggery.

Oh, and I haven’t mentioned this yet, but you have no idea how much it pissed me off that after Steinbrenner assumed room temperature that I kept being told “You didn’t have to like him, but you had to respect him.”  Eat me. The same people who said this are the same people responsible for the impending death of America.  George Steinbrenner was a criminal who deserves the same respect a dog pays to a fire hydrant.

This is clearly a reactionary pick. Last year I picked the Giants as the least likely team to win, and I’m not making that mistake again. This team plays just like last years champions. They get big hits when they need them, and they get enough pitching to make those hits stand up. Not to mention, if you believe in momentum AT ALL, you can’t bet against this club.

This is the first appearance the Brew Crew has made in the post-season  since Harvey’s Wallbangers in 1982. The Brewers finished with a 57-24 record at home, which was both best in the major leagues and a franchise record.  Since they will host the Diamondbacks in the first round, that should bode well for the boys from Beer City.

Don’t look now, but this is a franchise that wins with pitching. They won the 2001 World Series with Curt Schilling and Randy Johnson, and Arizona moundsmen have earned five Cy Young Awards in 13 seasons.  This year, the D-backs sport right-handers Ian Kennedy and Daniel Hudson, as well as left-hander Joe Saunders who have all racked up 200 innings.

With all those innings-eaters at the top of the rotation, the D-Backs always more often than not have a fresh bullpen, which means manager Kirk Gibson often can get desirable individual late-game matchups. This also means Arizona tends not to get far behind in ball games, which is part of the reason for the team’s big-league-high 48 comeback victories.

Oh, and as a life-long Dodger-hater, I’m obliged to bring up the quintessential Kirk Gibson post-season moment…I may need a bucket…

Only the Yankees have won more World Series titles than the Cardinals, and both have won in the last five years. This means the Cardinals are a team with plenty of post-season experience.

They also have that momentum factor I mentioned with the Rays. The Cardinals got hot in September after being 10 1/2 games behind the Braves on Aug. 25.   This means they won 23 of their last 32 games.

Texas hit .320 in September, the highest batting average after September 1st, which is the best since this statistic has been kept beginning in 1946. We all know this team can hit, and even though the Ranger pitching staff has the fifth best ERA in the American League, I’m not sure a Cliff Lee-less rotation scares anybody.

Like the Brewers, the Tigers are another team showing up in October after a long absence. The last time the Motor City Kitties graced October with their was 1987. Of all the great moments in my own personal baseball history I listed earlier, I would be remiss if I didn’t mention Game 4 of the ALCS, when Tiger third baseman Darrell Evans became the goat to end all goats.

As far as this year’s Tigers are concerned, you can’t argue that Justin Verlander is the most dominating pitcher in the league, and Miguel Cabrera is the most potent offensive weapon, but the Tigers have some thump in the lineup beyond that. They have a supporting cast to go along with Verlander. The trouble is I simply don’t think they can beat the Yankees.

14 comments on “The Dubsism Baseball Post-Season Preview: A Look Back at Yesterday and A Look Ahead To October”