What We’ve Learned: The 2012 London Olympics 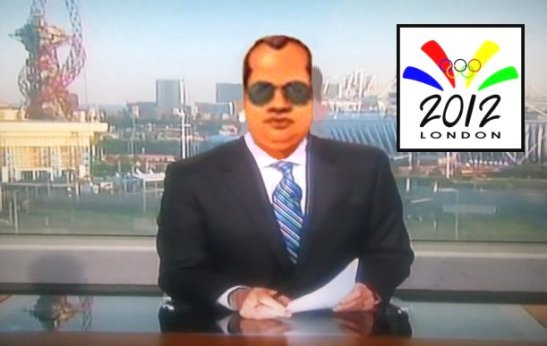 Now that the 30th Olympiad is in the books, it is time for us here at Dubsism to bring you a rundown of all the things important to remember about the London games; more than just those American-centric things brought to you by the American media.

We really can’t bash on NBC too much since, to be honest, we are doing the exact same thing they are: trying to keep an Olympic-related ratings boost alive by stringing this out as long as possible. If you doubt that, just check the program schedule for the NBC Sports Network.

Things of Note From Selected Events: 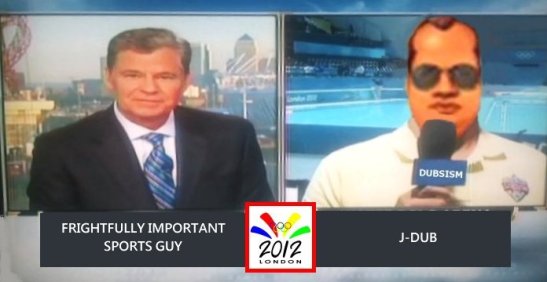 So, we are all supposed to be shocked to find out there’s nefarious activity going on in an Olympic sport? Harumph.

Time to face facts, America…your days of crushing, “Dream Team” level dominance are over.  There are plenty of NBA players for many other teams; Lithuania outscored the U.S.  for the last three-quarters of their game, and the U.S.  could have easily lost to Spain in the final.  You can’t give up 100 points and say you had no chance to lose.

I can’t really improve on this description of the sport as offered by Slate:

Beach volleyball has only been an Olympic event since 1996, and one could argue that, as this article puts it, the sport “has slipped into the Olympics by a back door marked ‘Sex.’ ” According to a 2008 article in Australia’s Sunday Age, “Beach volleyball successfully pushed for the 1996 Atlanta Games in part by treating IOC members to first-class return flights to a tournament in Rio de Janeiro, putting them up in luxury seaside rooms, and building a walkway from their hotel to the beach to save them from crossing the road.”

The IOC members liked what they saw from their walkway, adding the sport in lieu of non-jiggly pastimes—squash, roller hockey, etc.—that have long sought entrance to the Olympics. Beach volleyball is a surefire ratings booster, a not-so-thinly veiled excuse for men to ogle tall, tanned women running around, diving, and bending over in tight swimsuits. As London Mayor Boris Johnson wrote in a piece listing 20 reasons to be excited about the Olympics, “[T]here are semi-naked women playing beach volleyball in the middle of the Horse Guards Parade. … They are glistening like wet otters and the water is plashing off the brims of the spectators’ sou’westers. The whole thing is magnificent and bonkers.”

Is there anything that piece missed short of just calling “hot asses on parade?”

They did this on an outdoor field in Britain. Did nobody tell them it rains every goddamn day there? Every time somebody hit the ball, it left a rooster-tail of water behind it.  They either needed a roof or a squeegee? 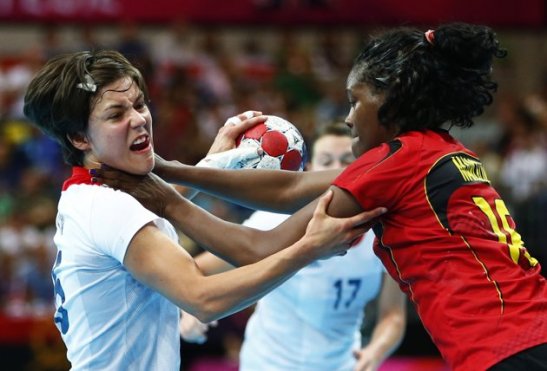 This is a sport in which I clearly underestimated the level of violence. You can’t even get away with that sort of full-on choke in Judo.

Gold Medalist Kayla Harrison has no worries about her future.  According to our good friend The SportsChump, she has a standing offer to do security at his bar anytime.

You have to love when this sport suddenly turns into a rodeo.

You may be sensing a theme here.  Not only did Alex Morgan score the gold-medal winning goal, she also took out New Zealand’s goalie in a preliminary match. 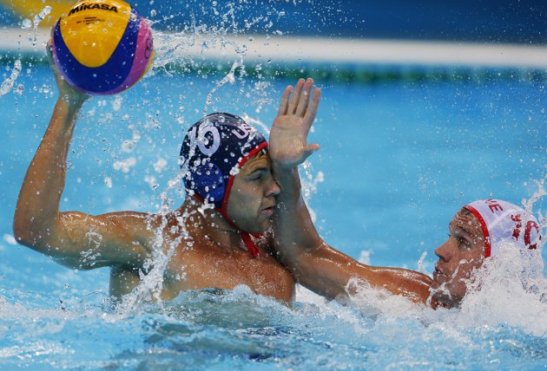 Here’s another sport that is just far more violent than I ever expected. That’s a full-on chop to the face. 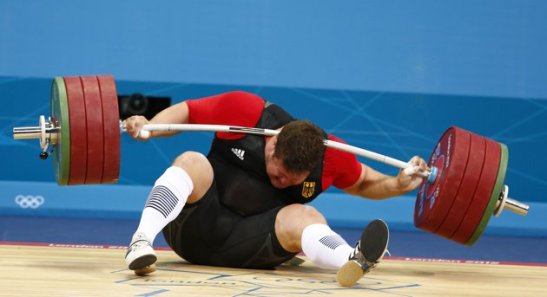 This sport is eventually going to kill somebody. There’s no way that doesn’t happen. 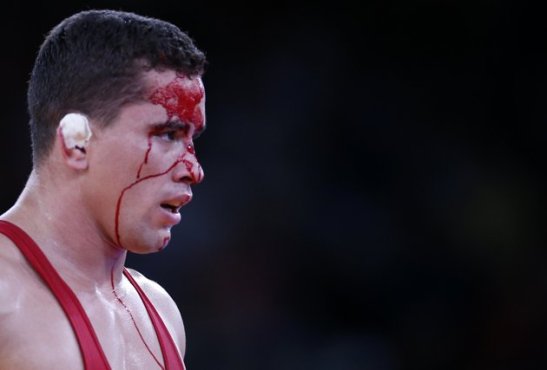 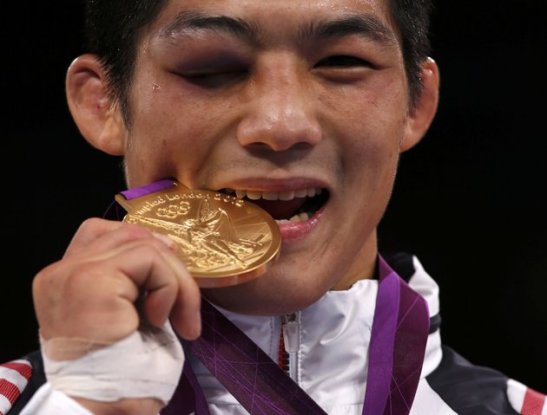 Here’s s sport where I actually expect some mayhem, and the wrestlers didn’t disappoint. 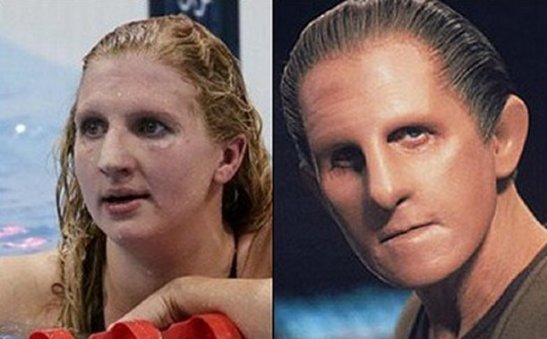 In honor of arguably the greatest Olympian since Zeus, here’s a look-alike bit dedicated specifically to the 20-plus medaled bong hitter. 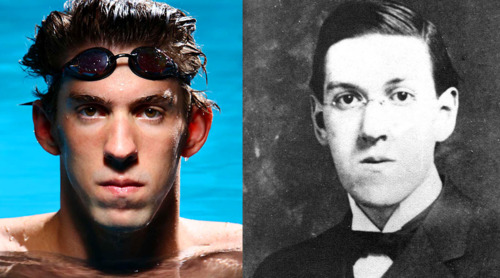 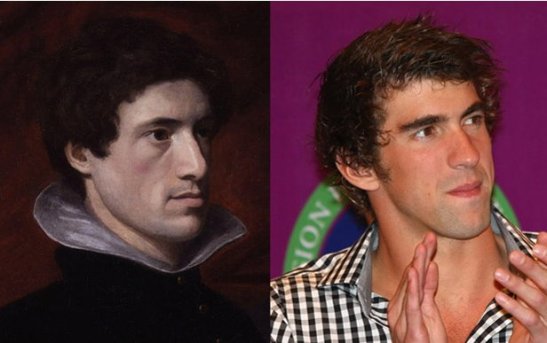 3) Swimming Michael Phelps and a Skate

The Olympic Athlete Who Looked The Most Like J-Dub

Jordan Jovtchev – The Jamie Moyer of the Olympics

The Serious Discussion:  The Bullshit About Being First

Be warned: The following segment is likely going to get me called a racist and a sexist….because I’m about to commit what has become a crime in America today: telling the truth no matter how uncomfortable it may make you feel.

One of the stories the western media loved to fawn over was that of two Saudi Arabian female athletes were the first women to represent that country in the Olympic Games.  If you aren’t familiar, Saudi Arabia is essentially a theocratic state which is largely run by Muslim law. This means Saudi culture by nature is misogynistic and exists about 600 years behind the rest of the world.

The two historic athletes who became the first women to ever represent Saudi Arabia in the Olympic Games have been snubbed by their nation’s media and subjected to a campaign of hate.  Sarah Attar ran the 800 meters on the Olympic Stadium track and Wojdan Shaherkani competed in judo earlier in the Games after the Saudi government eased its strict stance on women competing following international pressure.

This opening paragraph is a shining example of why the rest of the world hates the West.  The way women are treated in most Muslim countries is barbaric, anti-human, and none of our business.  Westerners love to run around wringing their hands about human rights and think they get to meddle in other cultures because of some sort of perceived moral high ground.

“Liberal” westerners are the biggest hypocrites when it comes to crap like this, and this is just another example.  The hypocrisy stems from the fact the westerners are all about symbolism which makes them feel better, even if it accomplishes nothing. Attar and Shaherkani are merely symbols for a bunch of westerners to get all self-congratulatory over.  If you doubt that, consider the following facts:

It isn’t that they lost…they never had a chance to win in the first place, because they didn’t belong their – NOT because of their gender or situation, but because they simply weren’t amongst the best, which is what the Olympics is supposed to be all about.

…However, there is skepticism about the true motives of the decision to allow Attar, a Saudi-American who studies at Pepperdine University, and Shaherkani to compete.

“They allowed them to compete for only one reason,” [Khaled] Al-Maeena [editor of the English-language publication Saudi Gazette] said. “If you don’t send women, then in the future your country will not be allowed to participate [in the Olympics]. It was a wonderful thing to see the girls participate, and it made many people proud, but there was also a motive for it.

3) These women got subjected to a lot of crap, and the people who made it happen don’t care.

A sinister Twitter campaign with the hashtag “prostitutes of the Olympics” originated in Saudi Arabia and was used to aim sexist vitriol at the competitors.
The father of judoka Shaherkani was so incensed that he contacted the country’s interior minister to demand action against those who had insulted his daughter. Under Saudi law, punishment for insulting a woman’s honor and integrity can be up to 100 lashes…

…Even though the women were forced to walk behind their male counterparts at the Opening Ceremony, their presence was seen as a step in the right direction for women’s rights in a country where females are still denied many of what would be considered basic human rights in other nations.

Westerners see this as a step in the right direction; back in Saudi Arabia, people get killed over shit like this.  This is the real problem with meddling in other cultures; it may make you feel better, that you are making a difference. Meanwhile, you are putting somebody else’s ass on the line.

Imagine how pissed off people in this country would get if all of a sudden a bunch of foreign self-appointed “our ways are best” started meddling with American culture. Can you imagine the back-lash if the tables were turned; if the Muslims ran the IOC and told America their women athletes had to stay home? We’d start a war over that.  But, westerners have no problem with such “butt-in-ski-ism” as long as it is their will being imposed.

4) Political Correctness Is Anathema to Merit.

This example is uniquely American, but it is the perfect one. For some reason, we have become enamored with being the “first.” It all started with Jackie Robinson, the first black man to play Major League Baseball in the modern era. Robinson’s ascent to the majors was exactly the reverse of these Saudi women. Robinson was a tremendously gifted athlete who was far beyond competitive with other Major Leaguers, and it was his ability which meant he belonged in baseball.

However, with these Saudi women, it was not their ability that got them to London. Rather, it was this messed-up western sense of “fairness,” which usually means some sort of quota enforced by some sort of reverse discrimination.  These women didn’t get to the Olympics based on WHO they were, but on WHAT they were. Martin Luther King’s “dream” was a day when people would be judged on the content of their character, not the color of their skin.  Racism and sexism, despite the “best of intentions,” are still racism and sexism.

More Babes You Didn’t Hear About

Let’s face it…I’m a dirty old man, and the Olympics are chock full of women who make me seriously consider calling my doctor about that Viagra prescription.  In the original Dubsism post on the 30th Summer Games, we made mention of Vanessa Ferrari.  But there were so many more over the course of the past two weeks, and now it it is time they get their due.

This is the woman who got man-handled (pun really not intended) by U.S. gold medalist Kayla Harrison in the 78-kg final match. However, as I am an officianado of the “gentle way,” whenever Gemma wants a rematch against a Yank, I’d be more than happy to come down to her weight class.

I think a big part of the appeal here is in the name. Just say “Ivet Lalova” a few times to yourself, and you instantly hear the musical properties. think of the songs you could go all “Weird Al” on by using her name…Lola, My Sharona, Come on Come Over…feel free to add your own to the list.

The is the woman who took the screw-job handed out by the judges over some bullshit appeal.  More importantly, Ponor is not your average Olympic gymnast, meaning she isn’t 15 years old and 4 feet tall.

Zetlin only made the team based on a Olympic rule that each continent must have a representative. In other words, here’s another case where she didn’t make the team on her gymnastic merits, but it doesn’t take long to realize the two main reason she made this list.

In a word, these things were awesome. They were used to return the thrown objects (discus, shot, hammer, and javelin) back to throwing area in the track and field events.

5 comments on “What We’ve Learned: The 2012 London Olympics”