More Proof Roger Goodell Is An Asshole: Guess How Much The NFL Is Profiting From Breast Cancer? 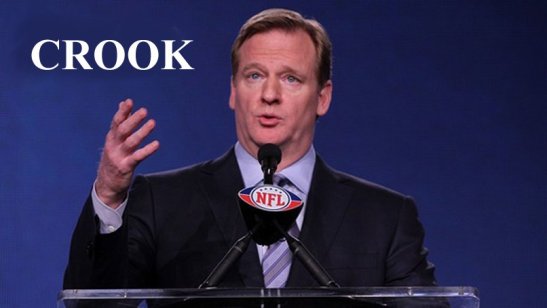 What do we know about Roger Goodell?

We know he is a guy who claims to care about player safety, then let his league be nearly destroyed by a bunch of ill-equipped replacement referees. We know he is a guy who wants you to believe he cares about the integrity of the league, yet he enforces rules by dictate and without fairness, uniformity, or due process.  What he doesn’t want you to know is the NFL is exploiting human suffering for profit.

No, it doesn’t have anything to do with the fact that football is a brutal game in which guys scramble each other’s brains for our shrieking delight.  It’s far more insidious than that.

We all know this is Breast Cancer Awareness month, and for all the pink you’ve seen awash in NFL stadiums, you would think the American Cancer Society would be flooded with cash from the NFL.

If you thought that, you would be wrong.

To be honest, the NFL is treating Breast Cancer Awareness Month like PBS treats a pledge drive.

It is Breast Cancer Awareness month, and the NFL is doing its part to support the cause as the league has become saturated in pink (click here for numerous examples). However, off the field, it is a different story.

Many of the items seen on the field can also be purchased in the NFL’s online shop. But while the items on the field will be auctioned off with proceeds going to the American Cancer Society, it is less clear how much of the sales of pink gear in the NFL Shop go towards research.

If by “less clear,” you mean “completely opaque,” then we are on the right track.”  So, let me be perfectly clear. When I’m not writing blogs, I run a a small business, which means in understand perfectly issues like retail, mark-up, and profit.  But I also understand “shady,” which defines what the NFL is doing here.

According to the website, by purchasing pink items in the NFL Shop, fans can “support the fight against breast cancer with pink NFL breast cancer awareness gear.” Of course, there is a huge difference between supporting “awareness” and donating money to research.

That last sentence is the key to all of this.  Much like when PBS has one of their annoying pledge drives where they “sell” you a coffee mug for $50, the NFL is letting you buy the pink gear under the assumption that a large amount of the money is going to aid cancer research. That assumption would be false.

In the case of the former, most of the money ends up in the pockets of billionaire NFL owners.

How this works gets a bit complex, but the short version is that the NFL is letting the vast majority of the money being raised from these sales stick to their fingers while letting the public believe the money is going to aid in the fight against cancer. In other words, Roger Goodell and the NFL owners are profiting from human suffering and death.

Here’s how Business Insider breaks it down…

When we contacted the NFL’s online shop for clarification, we were told 5% of the sales are being donated to the American Cancer Society. If the pink products have a typical 100% mark-up at retail, that means the NFL is keeping 90% of the profit from the sale of Breast Cancer Awareness gear.

And then consider that only 70.8% of money the ACS receives goes towards research and cancer programs. So, for every $100 in sales of pink gear, only $3.54 is going towards research while the NFL is keeping approximately $45 (based on 100% mark-up) [Note: see update below].

In other words, the NFL is is raking in nearly fifteen times in pure profit over what they are donating to the American Cancer Society.  The ACS would get nearly three times the research money if you sent them a check for ten bucks then if you bought $100 worth of NFL merchandise purported to be “supporting the fight against breast cancer.”

Of course, awareness is a very important factor in the fight against breast cancer. But I am sure if you asked most people with cancer or those that have lost loved ones to the dreaded disease, they’d prefer a cure over more awareness.

In the meantime, the wallets of the NFL, which had $9.5 billion in revenue in 2011, just keep getting fatter.

I’m no scientist, nor am I an economist, but I’m pretty sure $45 ups the odds of finding a cure over $3.54.  But the numbers get even better when you take the numbers from the aformentioned update and run the math.

[UPDATE] The NFL wanted to clarify their position. While they did not dispute the numbers above, a representative said the NFL does not profit from the sale of pink merchandise. Any money that is not donated to ACS is used to cover the costs of their breast cancer awareness program, A Crucial Catch. Also, the NFL says they have donated “more than $3 million” or approximately $1 million per year as a result of the program that began in 2009.

The NFL does not dispute the numbers, which either means they are correct, or possibly even lower that the NFL wants you to know.  Let’s assume Business Insider’s number are on the mark.  If the NFL is donating a million  dollars per year, and is only donating 5% of the pr0ceeds from the sales, that means the NFL is generating revenue in the neighborhood of $20 million per year off the “pink gear” sales.

Now, let’s talk about the cost of “generating awareness.”  Sorry, but it doesn’t cost $19 million to makes a few thousand pink baseball caps and pairs of football cleats.  If the NFL were really just concerned about “awareness,” they could strong-arm the networks who carry games to run public-service announcements about all things breast cancer. Hell, they could run a telethon on the very network they own (oh wait, nobody watches that except on Thursday nights).

In short, Kommissar Goodell and the robber baron owners who employ you, it is time to quit handing me yet another line of your bullshit.  Your “awareness” campaign is little more than an attempt to pump up your merchandise sales while using a small piece of the proceeds as a donation so you can claim to be “supporting the fight against breast cancer.”

Oh, did I mention those donations are tax-deductible?

10 comments on “More Proof Roger Goodell Is An Asshole: Guess How Much The NFL Is Profiting From Breast Cancer?”

This entry was posted on October 17, 2012 by J-Dub in NFL, Sports and tagged Breast Cancer, NFL, Roger Goodell.