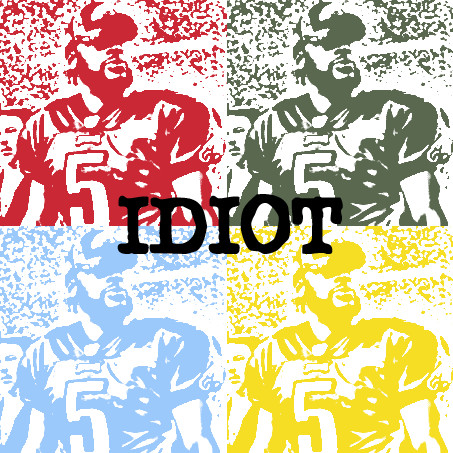 Last week at this time, Danica Patrick had just become the first woman to secure the pole position for the Daytona 500 today. Yesterday, she didn’t become the first pole-sitter to win the “great American race.”

Despite that lead-in, this isn’t about Patrick. Rather, this is about another thing she wasn’t the first to do; provide an opportunity for Donovan McNabb to prove what a dumbass he is.

Last week at this time, McNabb congratulated Patrick for being the first woman to win the Daytona 500, which would have been seriously awesome accomplishment, considering the actual race wasn’t run until yesterday. So, either Danica Patrick has a Chevy that can time-travel, or McNabb is a dipshit. To be honest, I waited to write this piece until today just to be sure the McNabb isn’t a psychic, but now that she didn’t win the race, it is safe to tee off on the former Eagles quarterback.

I think it is a safe bet that Danica Patrick’s car is not capable of ripping through the space-time continuum until I see either Albert Einstein or Captain James T. Kirk in her pit crew. That leaves us with the option that McNabb has his head up his ass.

Here’s a guy who lobbied for the Eagles to sign Michael Vick, then put on his pouty-pants when he lost his job to Vick.

Here’s a guy who said he would vote for himself for the Hall of Fame, when he is so clearly not a Hall of Famer.

Here’s a guy who as an NFL quarterback didn’t even bother to learn the overtime rules. He had no clue that NFL games went into “sudden death” and can end in ties.

But as an Eagles fan, my all-time favorite McNabb moment was a game against the Oakland Raiders where McNabb channeled his inner “Chris Webber” by calling time outs that didn’t exist.

With the ball on the Oakland Raiders 15-yard line with just 27 seconds remaining in the first half, the ingenious McNabb called a non-existent time-out. He was then penalized for doing so, bringing the ball back to the Raiders 20.

McNabb continued to shine from that point on, as he got sacked on the next play by Oakland’s Richard Seymour, and the Eagles were forced to kick a field goal. The score was then 10-6 with Oakland leading, instead of a very possible 10-10 tie at the break. The Raiders went on to win the game, hanging on for a pathetic 13-9 victory over Philadelphia.

But the thing that always drove me the craziest about McNabb was his using the “race card” to deflect any of his well-deserved criticisms. It all started with that Rush Limbaugh situation, which because of Limbaugh’s controversial nature allowed McNabb to dodge legitimate questions about his abilities as an NFL quarterback.

An NFL quarterback is probably the most visible position in all of professional sports, and NFL quarterbacks carry more of the weight of team performance than any other position. That criticism isn’t just reserved for the guys who can’t play. For every bad quarterback that has ever stepped under center, there’s a John Elway who “couldn’t win the big game” until the very end of his career. Peyton Manning just re-affirmed that long-standing knock on his tenure in the NFL. Jim Kelly is in the Hall of Fame and still has to hear about never winning a Super Bowl.

Having said that, let’s look at McNabb and why he might take some heat. He was the face of Philadelphia team known best for gagging 3 consecutive NFC championship games. He was the face of a Philadelphia team that upon finally winning a trip to the Super Bowl completely rolled over in crunch time against the Patriots.  Under McNabb’s lead, the Eagles simply seemed to be going through the motions after they feel behind, but the game was still in reach. Sure, Philadelphia fans are known to be harsh; after all these are the people who throw batteries and boo Santa Claus, but you tell me a fan base who would be forgiving of their quarterback giving up in the biggest game of his career.

When you combine all those layers, the NFL dumbassery of Donovan McNabb looks certain to be matched by his posrt-career stupidity, thanks to the NFL Network’s giving him yet more opportunities to prove what we already knew.