An Open Letter to Purdue Football Fans: Firing Darrell Hazell Is Only The Beginning

Yesterday, Boiler Nation sat through yet another humiliating loss.  Saturday’s seal-clubbing at the hands of Maryland was the fifth time a Darrell Hazell Boilermaker squad got half a hundred hung on them.  I’m not a Purdue fan, nor am I an alum, but I live in the heart of Boiler Nation and I’m married into a family with hefty Purdue roots.

Today, my sister-in-law who barely speaks to me made it a point to illicit an opinion from me on Hazell.  At an event held literally in the shadow of the Purdue campus, this woman wearing a Purdue sweatshirt actually said the following:

“Hazell isn’t really that bad of a coach, is he?”

I didn’t know whether to shit my pants or burst into convulsive laughter, but that initial reaction quickly faded into bewilderment.  Why the fuck would anybody ask such a silly question?  A long time ago in a galaxy far away, I used to be a paramedic.  This woman did not show any signs of having suffered a recent stroke, nor was there any suggestions of blunt force trauma to the head. Outside of this morning, this woman has spoken a grand total of 14 words to me in the last five years, but even that’s enough to know she neither insane or cognitively impaired.  In other words, at that moment I was totally flummoxed as to why somebody…ANYBODY would say something so brain-numbingly stupid.

Then it hit me. She’s not watching the games. I’m pretty sure she’s not alone. Nobody that has been watching Hazell in action could possibly come to a conclusion of ANYTHING other that his coaching skills stink like worm-infected dogshit on a sun-baked sidewalk.

Like I said, I don’t have any skin in the Boiler program, but getting labeled as a “sports fan” means that’s what people “small talk” you about, which in turn means you have to be able to speak to the travails of the home team.  For purposes of full disclosure, I was actually a Hazell defender until one precise moment during last years Michigan State game.  The Spartans were really good, the Boilers were not, and that’s not unusual.  What was out of the ordinary was the fact that Purdue played very qwell in that game, and had a serious shot a notching a big-time win on the road.   In the middle of the third quarter, Purdue had the ball near midfield and were facing a third down needing seven yards to convert. Three Boiler receivers went downfield on the routes, and not one of them ran past the first-down marker. NOT FUCKING ONE.

That doesn’t “just happen.” That is 100%, U.S.D.A Prime horrible coaching.  Think about it.  Those receivers got told to run those routes, the quarterback threw to one of those receivers and at no point did any of them realize they were running a play  SHORT OF THE FIRST DOWN MARKER!.  Stupid is as stupid does, and nobody does stupid like Darrell Hazell. I’m a life-long Philadelphia Eagle fan which means I lived through Rich “Decline the Penalty and Punt” Kotite, whom I considered to be the worst coach I’d ever seen.

If you follow @Dubsism on Twitter, you know I like to have a bit of fun with the “Fire Darrell Hazell” crowd. But now, not only do I completely understand them, I’m here to help them.  Obviously, Hazell needs to go.  But Boiler Nation, you have to ask yourself, with whom do you replace him? Before you answer that, you may wish to consider a few important points.

Take a good look at that picture.  It’s not going to happen.  Guys like Les Miles don’t go to places like Purdue. In fact, the only school in Indiana which has even the remotest chance of landing a “big time” coach is Notre Dame, and that’s a realistic possibility since you can already hear the ice cracking under Brian Kelly’s feet in South Bend.  Guys like Les Miles don’t go from perennial powerhouse programs to the bottom of the B1G Ten. Right now, Purdue football might as well be that pimply-faced captain of the high school Chess Club who is delusional enough to think the cheerleader are lining up to blow him. That’s not happening either.

2) Don’t Forget About The Money

Even if you fire Hazell now, you still have to buy out his contract.  That means two more years at $2.2 million each, plus whatever is left from this year.  That means you’re going to be over $5 million in the red before you even put your head coaching position on Snagajob.com.

Now, take a look at what top-tier college coaches make.  Hazell’s $2.2 million ranks him #51 out of 128 coaches in college football as of 2015.  Nick Saban at Alabama tops the table at $7 million per year. I don’t see Purdue President Mitch Daniels pumping that kind of cash into a program playing to a half-empty stadium (more on that in a bit). Tack on to that that most “big time” coaches are bringing their own assistants, and now you’re buying out one staff so you can pay another.  I’m willing to bet Mitch doesn’t see $10 million in the athletic department piggy bank right now.

3) Speaking of Money, Put Some Where Your Mouth Is

Earlier, I mentioned Notre Dame.  Want to know how they can continually afford to pay multiple head coaches?  You know, the one currently on the sideline and at least the last two they bought out.  Because they have a ton of rich alumni who give the football program a ton of money.  Purdue is known as an engineering school, and I just happen to know that engineers tend to make pretty good money.  You don’t need one huge benefactor like T. Boone Pickens at Oklahoma State.  If you can get 50,000 people to give you $500 each, that’s a quick $25 million.  But you have to make them want to give you money, which leads to #4…

4) You Need Fans Who Give A Shit

Normally, I think Gregg Doyel as a writer ranks somewhere in between the guy who writes the “So, You Think You Have Chlamydia” pamphlets at the free clinic and the engine block from a 1994 Ford Taurus.  But he has an article in today’s IndyStar.com (link not included as those ass-licks make you take a survey to read it). which illustrates the fact that years of crappy Purdue football has left Boiler Nation as a largely apathetic bunch.  That explains the comment coming from my sister-in-law.

Shoe-horning 36,000 fans into the 65,000 seats at Ross-Ade has to change, and before you point out the “chicken or egg” nature of winning feeding attendance, understand you’ll have to get creative about increasing attendance at first.  The problem is that even guys like Les Miles are going to spend two to three years cleaning up the mess that is Purdue football.  Not only is your new coach inheriting a program which currently can’t recruit, it’s been led by a guy who is so obviously a complete dickweed that he’s populating the SEC with quarterbacks who left because of him. That also means he’s probably done a lot of “well poisoning” in terms of recruiting. In other words, no matter what you do, it’s going to be a while before you can depend on the product on the field to be the draw.

Sell cheap beer.  Give away tickets.  Increase the size of the student section.  Replace the band and that big, stupid drum with nude, female, full-contact karate at halftime.  Insert your own idea here, because you have to do something.  The bottom line is you’re going to have to “think outside the box” to get people to give a shit about Purdue football even though it won’t be any good for a while. 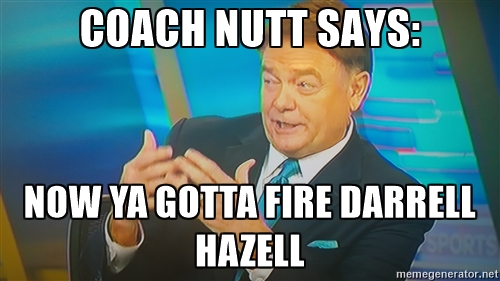 I’m not saying don’t fire Darrell Hazell.  Bite the bullet on the money and cut your losses, Boiler Nation. But don’t delude yourselves.  You can’t attract, nor can you afford guys like Les Miles. You’re at least one head coach away from being a program in that class.  First, you need the guy who will take from from dreadful to a New Year’s day bowl game (like when Les Miles rescued Oklahoma State from years of middlin’-to-terrible football).  Then, when that guy leaves to go to a “big time” job (like when Les Miles left Oklahoma State for LSU), you can get the next “big time” guy who takes you from New Year’s Day to a championship (like Les Miles did with LSU in 2007).

In other words, you have to find tomorrow’s Les Miles before you can hire today’s Les Miles.

2 comments on “An Open Letter to Purdue Football Fans: Firing Darrell Hazell Is Only The Beginning”