A Defense of Bret Bielema 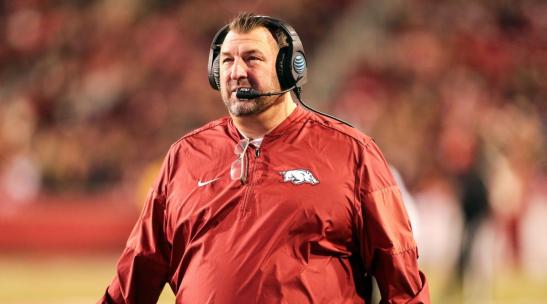 The University of Arkansas fired it’s football coach on Friday.  Granted, these guys lose their jobs all the time.  Sometimes, these firings are deserved, but there are also times when coaches get the gas pipe because they are the “whipping boy” for a slate of other problems.

Bret Bielema’s dismissal presents an interesting case because I can’t decide which category into which he falls.  One doesn’t need the super-computer at NASA to decipher the underpinnings of the “he needed to be fired” argument.  Bielema’s record with the Razorbacks was less than stellar; going 29-34 overall.  That’s not going to work for Razorback Nation, but it may also be time to take a hard look a Arkansas’ expectations.  That’s why the Bielema story goes beyond the won-loss record, because a discussion centered solely on the numbers obfuscates some uncomfortable realities for the Razorbacks.

I might as well get this one out there first, because this is the point which will get me the most hate mail.  The sad, but simple reality is the “Glory Days” of Razorback football died with the old Southwest Conference.  Once Arkansas moved to the SEC, they cemented themselves into a spot where they could easily be a perennial second-rung program.  If you doubt that, just look at the situation Bielema’s successor is going to face.  Before he can even address what rebuilding Arkansas football is going to entail, he’s got to deal with “Superman” in Alabama, the “Kryptonite” of Auburn, and the team which has produced the most NFL players in the last few years in LSU.  That’s not exactly an attractive quality for a new coach who knows if he doesn’t win in about three years, he’s facing the same fate as his predecessor.

What a lot of people are forgetting today is the Razorbacks worst season under Bielema was the first one in 2013. That 0-8 campaign came as a result of the cratering of Razorback football in the aftermath of the Bobby Petrino/John L. Smith catastrophe (more on that in a bit).  In the four seasons after that, Bielema took what was a dead-last place team to three bowl games, winning two of them.  I understand these weren’t “big” bowl games, and I am also perfectly aware of the concept the SEC is all about winning conference games and beating your traditional rivals.  But I’m also well-versed in the idea that you have to walk before you can run.  That leads to the last bit of reality…

Here’s a few questions for Razorback fans.  Of the eight head coaches to be on the sideline for Arkansas for more than one game since the departure of Lou Holtz in 1983…

Take a hard look at that.  It means that Arkansas football has at it’s peak over the last 35 years been little more than passably mediocre.  There’s reasons for that which run far beyond anything Bret Bielema could have possibly done.  There’s a dysfunctional family circus running rampant in Fayetteville, and it has been that way for quite some time.  One can see this by taking a look at the three winning Razorback coaches in that time. 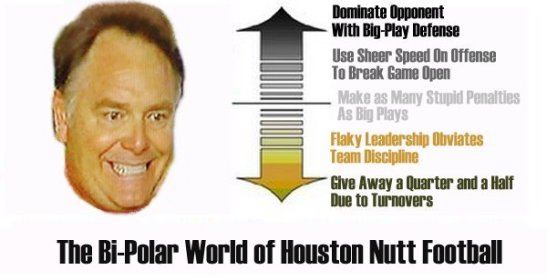 There’s three losing coaches and ten years in between Ken Hatfield (the last guy to win a conference title) and Houston Nutt (the last guy to win a division title).  Houston Nutt was a two-time SEC Coach of the Year, but was run out of town over some crap on a fan massage board after two seasons in which he led the Razorbacks to one SEC West title and consecutive New Year’s Day bowl appearances. 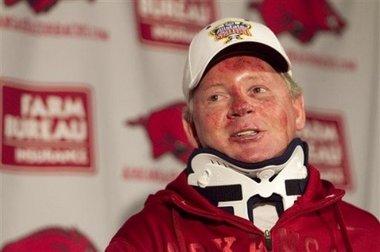 That led to his replacement with Bobby Petrino, who while taking the Razorbacks to their only BCS bowl game also became the guy who ushered in the plummet from that peak.  This is exactly why I used Nutt and Petrino in my re-make of “Apocalypse Now” starring the SEC coaches of the time.

Thanks to Petrino making the supremely stupid decisions to put his extra-marital affair partner on the university payroll, then to lie about her presence in a motorcycle accident exposed the university to a lawsuit meant everybody had to get fired.  Because in the immortal words of Sheriff Buford T. Justice that made Arkansas look like a “possum’s pecker,” they had to hire the first guy who returned their calls.

Thus enters the one-season wonder known as John L. Smith.  Smith signed on to a 10-month contract to coach the Razorbacks, which despite his being formally announced as the “head coach” it was also stated that Smith’s hiring would allow Arkansas to hire “a head coach for the future of the program.” In other words, “we’re here to introduce our new lame-duck coach.” Then everybody acted surprised when Smith oversaw the final approach on the descent from the Sugar Bowl to the shitter.

To use today’s favorite over-used cliché, this is why Arkansas can’t have nice things.  Sure, Bret Bielema may have been a bad fit at Arkansas, and he may have had struggles recruiting, but he surely isn’t the first guy to be barely mediocre in Fayetteville.

He also isn’t likely to be the last.