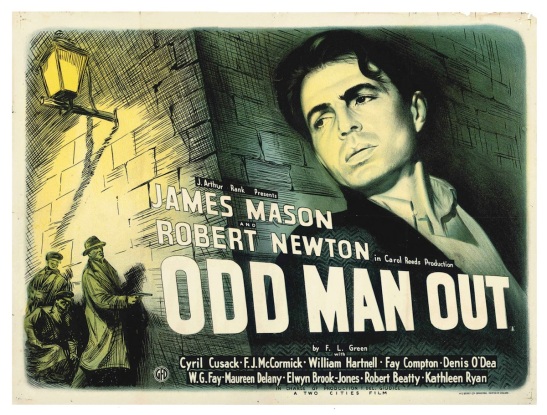 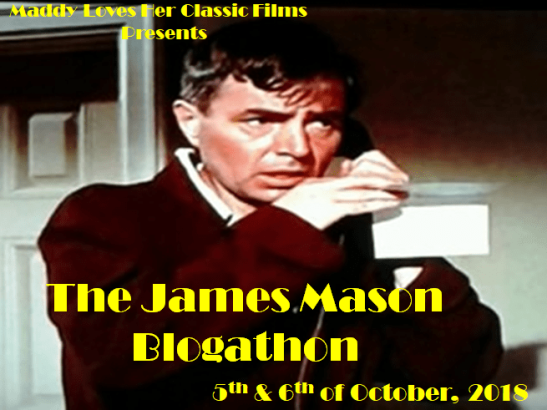 NOTE: This installment of Sports Analogies Hidden In Classic Movies is being done as part of a blog-a-thon celebrating James Mason. This is an event hosted by Maddy Loves Her Cllassic Films. If you are a fan of classic film, there’s really no reason that blog shouldn’t be in your bookmarks.

You can all see the participants in this blog-a-thon here.

Every year, I use that picture of James Mason’s “Norman Maine” from the 1954 version of “A Star Is Born” inadvertently smacking Judy Garland’s “Vicki Lester” at the Academy Awards to announce our nominations for the Dubsy Awards, the world’s most prestigious award one can win in the world of sport. He got such a spot on this blog as he is on my list of favorite actors.  Besides, is there a better image for a satire of all awards shows?

From all that, obviously I hold James Mason in high regard as actor.  When I found out Maddy was doing this blog-a-thon, I wanted to write about “Odd Man Out because I believe this is one of Mason’s best performances, and yet it is just obscure enough to American audiences that for those of us on the western shore of “The Pond,” it’s fairly easy to miss.

In this British-made classic, Mason plays Johnny McQueen, an Irish Republican Army (IRA) hoodlum who has a modern-day “Robin Hood” aura about him.   The IRA is never explicitly mentioned, nor is the setting of the movie, but the only way the plot makes any sense is if McQueen and his cohorts are IRA members in post-war Ireland.

In need of cash, McQueen and three of his colleagues commit an armed robbery at a local textile mill. While they get the money, McQueen is confronted by a mill employee who is also packing heat.  Gunfire is exchanged; the mill worker is killed and McQueen is seriously wounded. This gets further complicated when the getaway driver slams the pedal to the metal with McQueen only partially in the car.  He is unable to secure himself into the speeding car;  he eventually falls out and his colleagues leave him bleeding in the street.

This sees McQueen spending the balance of the film seeking hide-outs and somebody who can tend to his gunshot wound, all with every cop in the city hot on his heels.  McQueen goes through a series of locals who are for the most part supportive of McQueen and his un-named IRA as there is a lot of “robbing from the rich to give to the poor” going on.  But at the same time, these locals all know being caught with him in their house will bring the full weight of the law down on their heads.

While the police flip every cobblestone in the city looking for McQueen, one inspector focuses on McQueen’s girlfriend Kathleen figuring that eventually she will lead the police to him.  The inspector’s hunch pays off; the denouement comes as the cops catch up to McQueen and Kathleen as they are heading for a ship on which they intend to flee the country.

There’s an old saying about how the road to Hell is paved with good intentions.  There may be more than a kernel of truth in that, but the force that keeps people on that road is loyalty. If you are a sports fan, you already have experienced what I mean by that even if you don’t know. If you aren’t a sports fan, “Odd Man Out” is an excellent vehicle for the idea that be it sports or classic films, loyalty is a wonderful thing which can also bollocks everything up.

There’s three ways how that happens.  The first is because all too often, loyalty is the first casualty when the bullets starts flying.

One of the first things you learn participating in team sports is to always pick-up your teammates; it’s really the central tenet.  In the military, a variant of that theme is you never leave a man behind.  Possibly the biggest example of this resides in the speech President Richard Nixon had prepared in the event of a catastrophic failure during the 1969 moon landing.

Not only did McQueen’s cohorts panic and completely ignore this concept; no matter how you slice it, the getaway driver doesn’t wait for him to get in the car and they left him bleeding  in the street.  Not to mention, am I the only who noticed that all the time Johnny McQueen is on the lam from the cops, his buddies have a bit of “as long as they are looking for him, they aren’t looking for us?”

Just imagine what would have happened had there been dead astronauts left in space and the president says “They know the job was dangerous when they took it.”

Another way loyalty gets off the track is when it isn’t absolute.  “Odd Man Out” contains a perfect example.  The scene in which the cab driver tells McQueen “I ain’t  with you, and i ain’t against you, but I cant get into this.  If the bad guys find you, let them know who helped who, but if the cops find you, you never heard my name.”  That’s a giant load of crap because the cab driver is making sure he’s got one foot on either side of the fence.

In the sports world, that is just not acceptable.  Man U supporters suddenly do not become Man City fans. A New York Yankees fan would never swap loyalties to wear a Boston Red Sox cap.

Then there’s the matter of absent loyalty.  This one is the most abstract, and it’s also the deadliest.  There’s two prime examples in this film.  The first comes when McQueen’s sister tells her priest she’d be willing to kill her brother out of pity, then kill herself to avoid the penalty.  That is entirely messed up because it represents the complete absence of loyalty.

Instead of going the “murder-suicide” route, she could be loyal to her brother and help get him out of the country.  She could be loyal to the IRA and force them to do a hell of lot more to help her brother than they really do.  Or, she could show loyalty to the Crown and rat him out.  Instead, she eschews all those options; her first response is to start pumping bullets into people, including herself.

The last example comes from McQueen’s girlfriend Kathleen.  While she is the one who takes the biggest risk to help him, she’s also the one who gets them both killed.  By this point, it’s getting more and more evident the odds are dwindling for McQueen making it to the end of this movie with his life.  There’s a point when it’s painfully obvious the only way he’s going to survive is to get medical attention in a proper hospital, and the only shot he has at getting that is to turn him over to the cops so they get him the doctor he desperately needs.  I understand that was certainly not a guarantee; the police might have been very happy to let him die in the back of a paddy wagon.   But rather to take the only shot she had to save his life, McQueen’s girlfriend starts a gun battle that gets them both killed; almost as if there is something romantic about being together in death.

Johnny McQueen would make the world’s worst sports gambler; even worse than me. He’s always taking the bad risks, and worse yet, he depends on the loyalty of those around him as his bail-out.  What he doesn’t discover until it’s far too late (if he ever really does) that you can’t depend on loyalty because there is almost no way to overcome the loyalty people have to themselves.  Once the risk your presence poses outstrips the amount of risk to which somebody is willing to be exposed, you’re going to get cut.

In other words, loyalty is the classic double-edged sword. The question is…does it matter which side cuts you?