Change My Mind: Jay-Z and the NFL

Today’s Take: The partnership between the NFL and Jay-Z is a smoke-screen.

The Argument: I’ll admit when I first saw the announcement of this partnership, I thought this was clearly another one of Roger Goodell’s follies.  But once I really delved into this, I realized this has little to do with what is being touted.  They can sell this as an exercise in the “entertainment value” of the NFL and/or “social activism” all they want, but there are three main factors which define the environment in which this arrangement was concocted; ones that explain the real reason for the existence of this partnership. Once you consider those and keep them in mind as you walk through this, it becomes much easier to see what this is really all about.

Now, let’s consider the singular fact which unifies those three factors. The “entertainment value” of the NFL and/or “social activism” are undeniably two areas in which Kommissar Goodell to a large degree has his flanks exposed. Think about it. 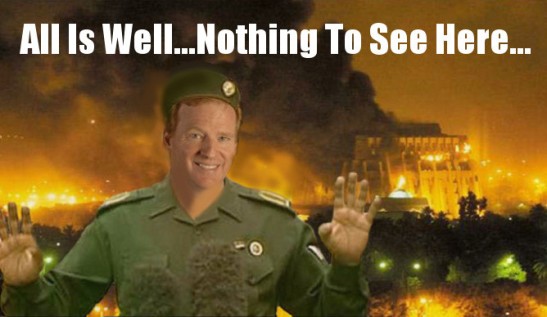 The “entertainment value” thing is all about one thing…the Super Bowl halftime show. Sure, Jay-Z can make all the noise he wants about producing music and podcasts and whatever else, but  we all know the Super Bowl halftime is the bell-cow for  anything regarding non-football related entertainment and the NFL.  We also know that thanks to Janet Jackson’s nipples, anything controversial which happens during that event is going to be a global phenomena.  Look at how worried everybody was that Lady Gaga might pull something during her half-time show.  In any event, even Kommissar Goodell isn’t chowder-headed enough not to understand that as this country heads into an election year, he faces a huge risk of his half-time act pulling a political stunt which pisses off a large number of people. But by putting Jay-Z in charge of that, not only does Goodell not need to worry about the choice of act, he has a ready-made head to roll if something goes wrong.

Keep that “scapegoat” thing in mind while I explore the smoke-screen that is “social activism.” First of all, the idea that the NFL cares about “social activism” in and of itself is ludicrous. The NFL only cares about making money; this league has a tremendous track record of decisions which bear that out under the Goodell regime. Insofar as that goes, regardless of your opinions on “social activism” or how you care to define it, a large enough number of players care about that issue to the degree that it can’t be ignored, especially heading into the collective bargaining process.  By outsourcing that to Jay-Z as well, not only did Goodell got something else off his plate, but if it comes up as an issue during the CBA talks, he can drop it right in Jay-Z’s lap.

But wait…there’s more. Don’t forget the whole point of the lock-out in 2011 was to break the Player’s Union, and Goodell failed miserably at that. That means this time around, he would love to atone for that failure, but now there’s a new complication. In a world where…right, wrong, or indifferent… “social activism” is at the forefront, an action where a predominantly white group of owners is trying to break a union composed of predominantly black players. As bad as the optics on that could get, Kommissar Goodell just gave himself a “Get Out Of Jail FREE” card by appointing a “czar for social activism.”

If you doubt this, consider what happened at Jay-Z’s press conference in which he most assuredly went “shots fired” at Colin Kaepernick. When asked about the ex-quarterback and what role he may play in this new initiative, Jay-Z said “we’re past kneeling…it’s’ time to do something.” The opportunity for that came when Kaepernick stripped himself of any remaining vestiges of credibility during that contrived mess with Nike and the “Betsy Ross Flag” shoes.  The American media went out of it’s way not to tell you how much of a backlash there was to that in this country, but the evidence is in the result.

It all boils down to this.  Colin Kaepernick exposed his “protests” for exactly what they were…plain old-fashioned anti-Americanism.  Once it became clear Kaepernick is just another “limousine liberal” who doesn’t really care about the causes he supposedly supports, Goodell found himself presented with an amazing opportunity. By partnering with Jay-Z, Kommissar Goodell handed off the responsibility for dealing with two of his biggest non-football related issues so he can focus on making money and ultimately breaking the player’s union.  Not only that, he did so in a way that ensures the days of Kaepernick’s relevancy are over.

In other words, Goodell is borrowing a page from Al Capone’s playbook.  By pretending to care about “social activism,” Goodell is simply setting up soup kitchens in poor neighborhoods so you don’t notice when he starts machine-gunning people in garages.

2 comments on “Change My Mind: Jay-Z and the NFL”

This entry was posted on August 17, 2019 by J-Dub in NFL, Sports and tagged Change My Mind, Colin Kaepernick, Jay-Z, NFL, Roger Goodell.