An Open Letter to Denver Broncos Fans: Kyle Orton is the Greatest Athlete in the History of Ever

“Mile High city? I like the sound of that.” ~ Kyle Orton on his trade to Denver

Sure, we could sit here and argue about a bunch of statistical stuff, but that isn’t really the point behind why you must like Kyle Orton. Rather, you must understand that Orton is what every moderately-talented and under-ambitious 20-something guy wishes he could be. He has the super-hero like quality to be mediocre yet successful, and most importantly, immune to criticism. Face it, Bronco-maniacs. You will never see Orton curled up in the fetal position sobbing uncontrollably over the slings and arrows you may cast. You have to understand that the Neckbeard is born of different stuff than us mere mortals.

In short, he’s living the life you wish you could.

Picture a gray November 1982 in that American Mesopotamia known as Iowa. A baby who will someday become the Neckbeard springs forth genie-like from a party-size jug of Jack Daniel’s. He is raised by an unsuspecting Iowegian family, who don’t realize the young Orton is different until they realize his talent to raise his arm and cast a football a mighty distance. It is an ability that is almost as impressive as his ability to double-fist alcohol in amounts heretofore unseen in those parts (legend has it he once consumed an entire stock dam filled with Grain Belt beer).

The powers given unto young Orton drew the attention of the Tiller-stache, who brought the prodigy to Purdue. Orton walked onto the field, pushed aside whatever slag-heap the Boilermakers were pretending was a starting quarterback, and filled the skies over Ross-Ade stadium with pigskin. When nearly 50% of those balls resulted in positive yardage, and when Orton threw only ten less touchdowns than interceptions, the Neckbeard was born. 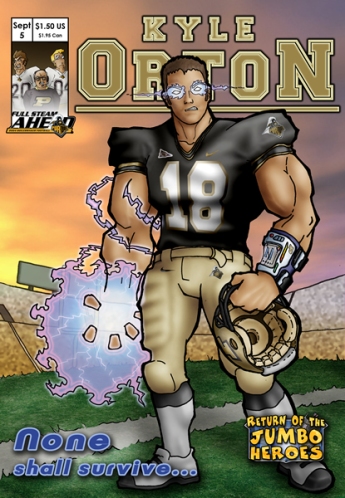 Eventually, the Neckbeard outgrew West Lafayette; moving to the land of the NFL, and he has no idea how. By his own description, Orton awoke at the 2005 NFL Draft next to a crowd of spectators and large black man in a Bears jersey. Dumbfounded by the sudden rush of attention, he cast his road-map eyes into the crowd and said “Forget about Grossman, put your faith in the Neckbeard.”

He gained fame for his ability at first to out drink the entire Chicago Bears team, then the entire city. His fame only grew when his tales of mass consumption were combined with his exploits with the ladies of Chicago.

Now, Denver, the Neckbeard is all yours.

“Coach, can I get a different helmet? Eddie Royal says the green dot means you're the designated driver.” ~ Orton talking to Bronco head coach Josh McDaniels

If you are yet unconvinced that Kyle Orton is living your dream life, compare the average day in his life to yours.

3:00 p.m. – Call buddies, have them grab a couple of cases of beer on their way over to the crib

4:00 p.m. – Smoke another joint and watch Dr. Phil, because seriously that shit is hilarious

6:00 p.m. – Play Xbox, drink beer, and smoke up with buddies until it is time to go clubbing

So, Orton makes $3 million dollars a year to play football, and gets to do nothing but drink constantly, hang out with his crew, and nail the sort of chicks over which you could only fondle yourself.  Keep that in mind the next time your nine-dollar-an-hour-overnight-mall-security-guard ass wants to lip off.

15 comments on “An Open Letter to Denver Broncos Fans: Kyle Orton is the Greatest Athlete in the History of Ever”

This entry was posted on August 25, 2009 by J-Dub in NFL and tagged Denver Broncos, Kyle Orton, NFL, Open Letters.