Open Letter to Minnesota Viking Fans: Are You Ready to Accept Reality Yet? 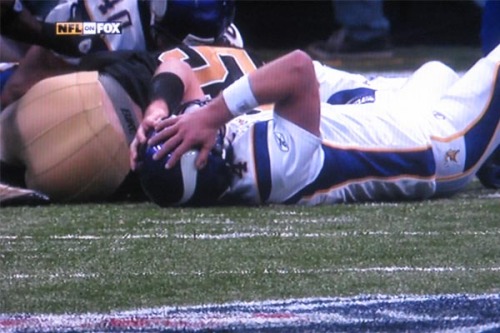 A season summed up in a single picture. A season that ends like so many other for Vikings fans, in utter disappointment. I really didn’t want it to end like this for you. Seriously, as a Philadelphia Eagle fan, I haven’t had an NFL Championship in my lifetime, in fact since the Vikings even existed. We get to hang our hat on being the only team to beat the Vince Lombardi-coached Packers in a championship game. And you hung yours on a different piece of Packer history.

Naturally, the thought behind bringing Brett Favre to Minnesota was rooted in this franchises’ hunger for a championship. Eagles’ fans made a similar pact with the devil a few years ago believing Terrell Owens was the missing piece to complete a Brad Childress-architected offense. Having seen this train wreck before, I tried to warn you. But despite repeated warnings, you ignored history and were doomed to repeat it. But, since I hope you will not continue to engage in this self-destructive delusion, you must really take a critical look at your “savior,” King Brett I. Specifically, pay attention to what are really the ten defining “big-game” moments of the latter half of Favre’s career:

NFC Divisional Playoffs  Jan. 20, 2002
It was advertised as a shootout between two of the gunslingers of the season  – Kurt Warner vs. Brett Favre.  It was supposed to be a battle of the league’s two best quarterbacks. Favre, however, decided to shoot himself in the cheese. He was picked off six times, two of which were of the “six the other way” variety.  The Rams easily defeated the Packers, 45-17, advancing to the conference championship game. 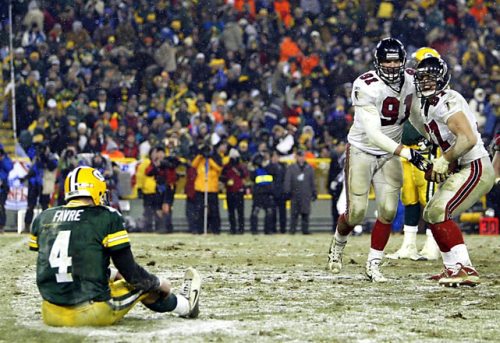 NFC Divisional Playoffs Jan. 11, 2004
Honestly, King Brett I isn’t the only who should accept blame for this loss; he wasn’t on the defense that let Philadelphia convert a 4th-and-26 to set up a game-tying field goal at the end of regulation. But Favre, in what is by now officially a pattern, choked in overtime, throwing a ball up for grabs that was intercepted by Brian Dawkins. The Eagles took advantage of the miscue and went on to win the game on a David Akers field goal.

NFC Wild-Card Game Jan. 9, 2005
After winning both regular season games against Minnesota, Green Bay was heavily favored against the 8-8 Vikings in the their first-ever playoff meeting.  Vikings QB Daunte Culpepper connected for 4 touchdown passes, while Favre chucked 4 picks, aiding the Vikings to a 31-17 victory.

Packers-Bengals Oct. 30, 2005
In a game that had playoff implications for both teams, King Brett I decided to have Halloween a day early. The future Hall of Famer threw five interceptions in a 21-14 loss. Despite that, the King had a chance to tie the game late in the fourth quarter, at which point he single-handedly stalled a drive at the Bengals 28 by hanging on to the ball too long and being sacked with only seconds left in the game.

Packers-Bears Sept. 10, 2006
Favre had his fair share of memorable moments against Chicago, but this wasn’t one of them. In the first shutout of his then-16-year career, Favre went 15-of-29 passing with two interceptions as the Bears pounded the Packers 26-0.

End of the 2008 season
Its December 1, 2008. King Brett I has the New York Jets at 8-3, including a win over undefeated Tennessee. Favre was looking like an MVP candidate, but then it all went downhill. The King and the Jets finished 9-7; Favre contributing 2 touchdowns and 9 interceptions in those final five games. The Jets missed the playoffs and the Favre era in New York came to an end.

NFC Championship Game Jan. 20, 2008
Playing at frigid Lambeau Field with a Super Bowl berth on the line, the Packers just needed to get past the underdog Giants to advance to Super Bowl XLII. The game went to overtime and the Packers seemed to be in good position when they won the coin toss and elected to receive. But on the second play from scrimmage, King Brett I’s pass to Donald Driver was well short, being picked off by Corey Webster, giving the Giants excellent field position. Lawrence Tynes delivered the game-winning field goal and Favre was left pondering his NFL future…until… 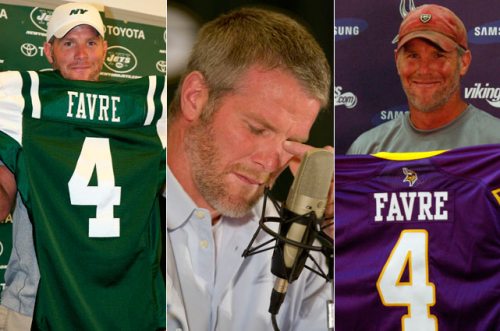 While this is an off-the-field issue, the indecision shown here is also reflected in many of the odd choices made by Favre late in big games. Few things in sports have irritated fans as much as Favre’s constant flirtations with retirement. Since 2002, he has talked several times about walking away from the game, only to return the following season. But the King upped the ante with his March 4, 2008 announcement at a teary press conference.

This was followed by the King’s reneging on the deal, announcing his desire to come back to the Packers. But by that time, Green Bay has already named Aaron Rodgers as the starter. After a few weeks of high drama, King Brett I was released by the Packers and signed with the Jets.  After a series of debacles ending the season in New York, there was another tear-jerker news conference announcing yet another retirement. Then came the on-again, off-again courtship by Minnesota, and now we find ourselves waiting to see if this soap opera will get a third installment.

NFC Championship Game Jan. 24, 2010
King Brett I came to Minnesota with the idea of winning a Super Bowl. This dream stayed alive until he drove the Vikings down the field late in the fourth quarter. Up until then, it seemed like the Vikings may find a way to overcome four turnovers; like destiny herself was smiling on the Purple. But on third down from the Saints’ 38, Favre violated two cardinal rules they tell you your first day as 9th-grade quarterback:

1) Never throw across your body.

2) Never throw back across the field.

Naturally, Favre’s attempt to Sidney Rice flutters into the hands of Saints cornerback Tracy Porter, forcing the game into overtime. The Saints won the coin toss and the rest is yet another chapter in the volumes of Viking disappointment.

In short, Viking fans, Brett Favre isn’t your past, he just blew your present, and at 40 years old, he clearly can’t be your future. That means it is time to stop drinking the purple Kool-Aid, dethrone the King, and find the quarterback of your future.

9 comments on “Open Letter to Minnesota Viking Fans: Are You Ready to Accept Reality Yet?”