Signs We Are Near The End Of Civilization: Brett Favre

There are dates on which everybody remembers where they were because some infamous event occurred on that day. December 7th, 1941…January 28th, 1986…September 11th, 2001. Perhaps it is only for me, but I would add August 3rd, 2010 to that list of infamy. Like I said, you may not remember what happened that day, but I can never forget it. An obviously disturbed man enters a Connecticut beer distributorship and opens fire, killing 8 and wounding 2 more. As tragic as that is, that is not the truly infamous event of this day.

In what may be the truly most disturbing in this series of Signs We Are Near The End Of Civilization, almost every  major news outlet stopped live coverage of this genuine news event to cover Brett Favre coming out of “retirement” yet again. 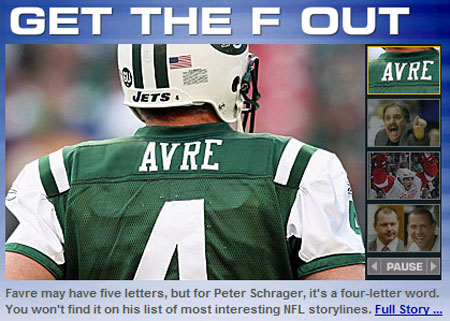 The best move the Jets ever made...

Are you kidding me?

I was so stunned by this I couldn’t really understand what had happened until sometime later. I literally could not believe that I live in a society where such obviously not-important-in-the grand-scheme-of-things celebrity twaddle could trump honest-to-goodness human drama. But the more I though about it, the more I realized I was the fool for not having seen this sign much sooner than I had.  After all, I live in a country where more people know Lady Gaga than know about the war in Afghanistan. Hell, I had a front row seat for the O.J. Simpson slow-speed Bronco chase.  Shame on me for not knowing this already.

I guess what really tripped my trigger is how low I had to go to see the peril. It takes a washed-up primadonna quarterback to make me realize that our celebrity culture has trumped all that really matters. What will prove to be an ultimately meaningless moment trumps the deaths of 9 people, including the gunman. Again, this really shouldn’t surprise me; we don’t defend the First Amendment to the Constitution over William Butler  Yeats; we do it over Larry Flynt.

Make no mistake, Viking fans, regardless of how the Purple fare this season, this was an undeniably insignificant moment. The fact that you are off to an 0-2 start and threatening to be staring down a 1-5 record after their first 6 games only takes insignificant down to utter meaninglessness.

There’s really only two things forthcoming out of the Favre travesty. One, how long will it take for the complete implosion of the Viking franchise caused by none other than Favre himself? This will be followed by Favre’s next retirement, which we likely won’t have to wait for the end of the season to see.

I’m not sure how he managed to do it, but Favre has a Rasputin-like hold on Viking fans. Even now, the great Purple north is resplendent in Brett Favre apologists who are busy finding every possible excuse for the Vikings losing their first two games other than the obvious terrible performance of King Brett I. Naturally, this is a complete fallacy. It isn’t about injuries to the receiving corps, it isn’t about Favre’s janky ankle. It is about this team looking like they are stuck on Week two of the pre-season. The absolutely sorry state of the offensive line doesn’t help, but even of that were fixed tomorrow, many of the Viking’s problems can be traced back to Favre and how he held an entire team hostage for the off-season.

There’s a reason why all those pre-season games are called “tune-ups” for when the snaps count for real. There’s also a reason why the Viking offense is running like an old V-8 in desperate need of a new distributor cap and plug wires. In short, the Vi-queens have no timing and continuity, and the reason is the leader of the offense never bothered to show up for those “tune-ups.” When the offense should have been getting it’s timing and continuity matter in order, they were instead mired in more media crap about Favre’s waffling.

There’s only one group of people who believe there is a substitute for hard work and preparation; they’re called losers. You know for a fact there are people throughout the league, probably even in the Viking locker room, who harbor a resentment for Favre and his asinine belief he can chuck a few balls to the local high schoolers, sell some Wrangler jeans, and call that adequate preparation for the rigors of the National Football League. There has to be a whole host of guys who sweated and puked their way through training camp who would love to see Favre get his ass handed to him as his cavalier attitude clearly demonstrates he values preparation as little as he values his teammates, as he clearly isn’t willing to give them the commitment they need to win.

The beauty of all of this is Viking fans will quickly point to Favre’s stats from last year; now they are pointing to his 225 passing yards against the Dolphins as proof that Favre still has something left in the tank. Statistics are for losers; without looking it up, how many touchdown passes did Drew Brees throw last year? How many did he throw Monday night against the 49ers? Know why nobody talks about it? Because in both cases the Saints won. Worse yet is Viking fans will pick and choose the stats on which they hang their hats…Passing yards are nice, as are touchdowns, but interceptions are not. Favre commits those at a greater clip than anybody else in NFL history, and it is a demonstrable fact that turnovers cause losses.

It is those losses that threaten to show us the second thing to come of all this. How long will it take for the Viking faithful to turn on King Brett I? It seems an 0-2 start isn’t enough to do it; just enough to start the rumbles or revolution. However, if the Vi-queens gag against the lowly Lions tomorrow, you have to wondering if the citizens of Purple Nation will still believe it was wise for them to offer more money and send half the team to beg Favre not to retire? It is very easy to see the scenario which makes this one of the worst player personnel decisions of all time. What has been created here is a culture of indecision and passivity; a culture that will guarantee the failure of a franchise over time. What has been created here is a culture of absentee leadership; allowing one player to be bigger than the team isn’t fatal, allowing one player to determine the direction of a franchise is.

Again, it all comes down to perspective. Sometimes, it is easier  to ignore than which is uncomfortably true; no one wants to understand the diseased culture which allows people to shoot their co-workers. But burying our collective heads in the sands of abdication of team, commitment, and responsibility is even worse.

This entry was posted on September 25, 2010 by J-Dub in NFL and tagged Brett Favre, NFL, Signs We Are Near The End of Civilization.