Joe Paterno and Ted Williams: Two Guys Who’s 400 Will Be The Last 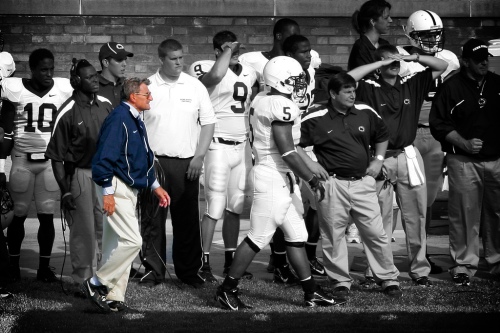 Greatness overcomes, and greatness perseveres; it did both in the form of Joe Paterno’s 400th career win on Saturday. The momentum swing was so drastic, it felt as if Northwestern was getting blown out even though the Wildcats led Penn State by a touchdown early in the third quarter.  Northwestern spent the first half marching through the Nittany Lion defense like the Red Army rolled through Hungary in 1956. But then a team that could do no wrong suddenly lost its ability to tackle, defend passes and block for quarterback Dan Persa, who had been Persa-cuting Penn State.  The tide turned, Matt McGloin led the Nittany Lions to 35 unanswered points, and Joe Paterno notched his 400th win, giving the man who is the face of Penn State football more wins than any other major college coach.

“It was just kind of a great big love fest, and it should be. They were giving love to a man who has done so much for Penn State University.”

The 83-year-old Paterno has led the Nittany Lions since 1966. But in his normal deflective style, JoePa didn’t want any fuss made over this achievement. Over the next few days, you may have opportunity to read plenty about Joe Paterno’s 400th win, but consider these facts as you ponder a feat that like Ted Williams’ hitting .400 in a season, probably will never be duplicated.

Paterno won his first game in 1966. That year, Steve Spurrier was a Heisman Trophy winner at Florida who went on to become a Hall-of-Fame level coach. Now, Spurrier has 183 wins, which means to get into Paterno territory, Spurrier would have to average 11 wins a season for 20 more seasons, at which time he would be 85 years old. Sticking with Florida, the current Gator coach Urban Meyer is one of the game’s best coaches who just won his 102nd game. For Meyer to get to 400 hundred wins, he will need to average 11 wins per season for 28 more years. at which time Meyer would be 74 years old.  If you drop the average to a more realistic 9 wins per season, Meyer needs to do that for 34 years at which point he will still be 80. That’s still younger than JoePa is now, but Meyer already has a history of stress-related health problems. Even Nick Saban, who has 126 wins, would need to win 11 games per season for 25 more years to reach 400 wins, when he would be 84 years old.

Even the two active coaches closest to Paterno’s mark, Virginia Tech’s Frank Beamer and Texas’ Mack Brown, have their work cut out for them. Beamer has 236 wins at 64 years of age, which means he needs to average 11 wins per season for fifteen more years. Mack Brown on the other hand, has 218 wins at age 59; he only needs to average nine wins per season for 20 years to reach 400 wins before he turns 80.

As for the unreachability of 400 wins, this is the part where I remind you that 400 is just the “big-school” record, the overall record is almost beyond belief. Most college football fans don’t even know the name of the man who has established himself as the most successful college football coach of all time with 477 (and counting) wins. That’s because John Gagliardi has spent his entire career at the Division III level. Gagliardi’s career began in 1949 at Carroll College, and he moved to St. John’s College in Minnesota in 1953. Like Paterno, Gagliardi was born in 1926 but Gagliardi became a head coach at age 22, where Paterno did not do so until age 40. When you stop to consider that Paterno has only 77 less wins in 17 less season as a head coach, his rise to the 400 mark becomes that much more impressive. It means Paterno had to averaged 9.09 wins per season in his 44 years at the helm of the Nittany Lions. Compare that to the other coaches mentioned here, along with Northwestern’s Pat Fitzgerald:

Meyer would be the youngest, but he also has to maintain the highest average number of wins to get there. By this table you would guess Mack Brown has the best shot to get there, but when you stop to consider his team now only has four wins on the season, and may be looking at a few years of below the needed average performance. As for all of them, stop to consider there are only a handful of coaches who stay in the game past age 70, and there’s a reason for it. Coaching at the Division I level is a rough business, and old guys tire of it quickly. Paterno is in his mid-80’s, and even after hip and knee surgeries, still jogs on and off the field.

Not only has Paterno been great, he’s been great for a long time, which is why his accomplishment has to be ranked as one of the unbreakable records of all time.

2 comments on “Joe Paterno and Ted Williams: Two Guys Who’s 400 Will Be The Last”