By J-Dub and Ryan Meehan

Every year about this time, it is tradition here at Dubsism to write a piece trashing the Super Bowl contestants.  The reason why we do this is actually rather simple.  The Super Bowl is the biggest sports event in America, and as such, it draws in all the casual fans who don’t pay attention to football until now.  That means those of who watch all the sports we can need to provide crucial information the newly-arriving fan may not know.

That means we wrote about the Seattle Seahawks last year, and we discovered something we were genuinely shocked by.  Seahawk fans are epically stupid…I mean “Colts Fan” -level stupid. They as a group couldn’t figure out they were being trolled last year,  But to be fair, before last year, nobody ever had a reason to troll the Seahawks.

As far as this upcoming game is concerned, there’s a lot of sentiment out there which believes that Seahawks may not belong in the Super Bowl because of the way they won the NFC Championship Game. Face it, they played 55 minutes of “swirling down the bowl”-quality football, after which they were bailed out by the Packers who choked than harder than Marv Albert wearing a ball gag.

Not to mention, everybody seems to forget how much this team struggled during the first seven games of the year, and they still aren’t exactly an offensive showcase. The first two points here explain why. 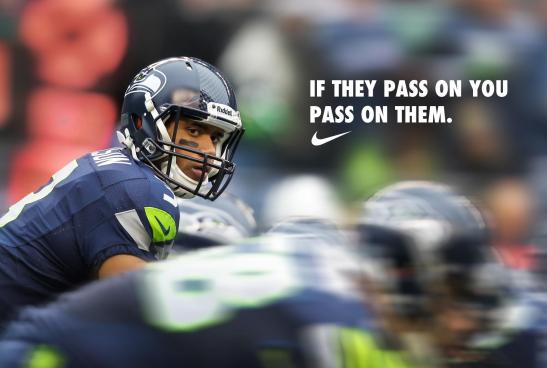 Yeah, except he doesn’t really pass on anybody.

It’s been another year, and we  still can’t figure out what this fucking guy is.  Sometimes, the guy looks like Roger Staubach, and sometimes he looks like Roger Goodell. What we do know for sure is that just by inferring that Russell Wilson isn’t the greatest quarterback ever, Seahawk fans will sharpen their crayons and bury us in some of the most hilariously misspelled hate mail you could possibly imagine.

Truth be told, while the jury isn’t in yet, Russell Wilson may be a Super Bowl-caliber quarterback, but that is also a range of possibilities wider than Chris Berman’s expandable-neck dress shirts.   He sure as shit isn’t Joe Montana, and he may very well be one leg injury from being Brad Johnson.  Once Seahawk fans and everybody else comes to terms with that, then we all will understand why most of Colin Kaepernick’s money wasn’t guaranteed.

Meanwhile, Wilson has spent most of his Mondays this year doing photo ops with sick kids at the local children’s hospital,.  What we don’t know is this is either a genuine gesture or something that the league has compelled him to do to make it look like everybody else in the NFL isn’t sucking up cocaine faster than a Craftsman Shop-Vac and laying more beats on their WAGs than Neil Peart’s snare drum.  In fact, we are skeptical of him in much the same way we are skeptical of Tom Brady; there must be some skeleton in his closet which will smoke him out as not the great guy they want us to believe he is.  For example, his ex-wife certainly wanted to get away from him bad enough that she pulled the rip cord before Wilson got a stupid-huge contract, after which she could have been given half of the state of Washington in the divorce.

The one thing we do know for sure is Wilson gets away with a lot of shitty performances because he’s got one of the greatest defenses ever to bail him out.  He’s the leader of a passing offense that is ranked 27th in the NFL; one that also depends on Marshawn Lynch come crunch time.

It must really suck to be in a league where you can’t even smoke something that’s named after you.  Lynch has been in the news recently because there is a marijuana dispensary that has named a strand of dank buds “Beast Mode 2.0.”  Personally, we think they should have called it “Marsh-mellow,” but what the fuck do we know?

Now, just because Lynch has his own name-brand version of the chronic doesn’t necessarily mean he partakes in it’s use, but the Jack Daniels people are considering naming a version after J-Dub because the houseboat he lives in floats on a fucking lake of bourbon.

Then there’s something on which Meehan needs to call bullshit.  Meehan happens to be a sufferer of anxiety disorder, and he doesn’t buy for a minute that Lynch’s reluctance to participate in post-game is anxiety-related as Lynch claims.  If he’s so riddled with anxiety, why is it a problem for him to talk to fifteen reporters shoving iPhones in his face, but it’s no sweat to perform in front of 70,000 screaming fans? B.S., pure and simple.

And what kind of a grown man professes his love for Skittles? For some reason, it’s difficult for us to buy the toughest running back in the NFL indulging  in a candy whose slogan is “Taste the Rainbow.”  That much sugar just isn’t good for your teeth.

Time for a dose of reality you may not like: America is not particularly fond of outspoken black men who don’t know when to shut up. As a nation, we just celebrated Martin Luther King’s birthday recently, and the ugly reality is that if he hadn’t learned when to claim victory and move on to something else.  What a lot of people don’t remember is that when MLK died, he had really played out his string. Sure, we all remember the great things he did during the Civil Rights Movement, but nobody recalls that he got himself killed over a strike by Memphis sanitation workers. That’s not really how the end should come for such a history-changing figure, but that’s what happens when you overplay your hand.

Think about it. By 1968, King really doesn’t have much of reason to exist anymore. The Civil Rights Movement is over having gained victory with the passage of the 1964 Civil Rights Act. Gone are the days of the Selma marches and speeches on the steps of the Lincoln Memorial. Instead of checking to the raise of the times, he overplays his hand and ends up gettign his brains blown out on the balcony of what today would be a Motel 6. What the guy should have done is sit back, rest on his laurels, let America digest itself over Vietnam, and run for president once the time was right. Given how Nixon butt-fucked himself and the Republicans with Watergate, that could have happened as early as 1976.

While it is on a scale about a millionth in size, Sherman is heading for exactly the same problem. He could keep his mouth shut and let his play on the field do the talking; instead he’s dropping himself to the level of eighth-graders on MemeGenerator.  Sherman’s gone from what was once mildly-entertaining media fodder to the guy who coined the phrase “U Mad Bro?”

In other words, now he’s just a big-time loudmouth. His constant jawing of everybody, from officials to sideline reporters has become as tired as Wilford Brimley with low blood sugar. The only thing it really does is to propagate the bullshit myth that circles our culture suggesting that “haters” are to blame for all society’s ills. Spoiler alert: They fucking aren’t.

Being bloggers, we see some of the lamest shit on the web being written by some of the dumbest people leading the shittiest lives, and they all drone on about everything which is wrong in their lives being the fault of “haters.”  The definition of a “hater” is easy.  It’s anybody you can blame for any problem for which you don’t want to admit your responsibility.  Spend more than thirty seconds on Facebook, and you will see shit about “haters” which will make you want to beat yourself to death with your keyboard.   The fact you are a single mother of four, all of whom have different “baby daddies” (two of whom are in prison) is not the fault of “haters.”  That’s all you, cupcake.

That’s why Sherman’s whole “I come from the ghetto” narrative has become such a sham.  Yeah, we understand that Sherman grew up in Compton, but we also know he went to Stanford and now makes millions of dollars per year, which means that story is more out of gas than Peyton Manning in January.

Regardless of whatever Pete Carroll achieves as football coach, he’s always going to seem like that guy who always has to leave his girlfriend’s house via the back door and gets out of town under the cover of darkness. The guy got run out of town by the Patriots and the Jets, and he got out of USC literally two steps ahead of the NCAA.  That’s why no matter what he does in the NFL, he’ll always seem like a college coach to us.

He gets way too excited for his own good, especially considering he’s the second oldest coach in the league.  The guy is only two years younger than Tom Coughlin, but for some reason those seem like dog years traveling through a rip in the time-space continuum.  Carroll still looks like he could spend a night tag-teaming cheerleaders, then go out and coach a play-off win, while Coughlin looks likes he’s one hypertensive event away from needing to be turned every two hours.

But the thing that bugs us the most about Carroll is about how now everybody loves his ass.  We remember when you could have gotten money for his hide in New York and New England, and by the time he’s done in Seattle, they’ll name a street after him.  So, why does everybody love his ass now? Because he’s fucking winning.  Duh…

In case you missed it, we also pissed all over the New England Patriots as well…