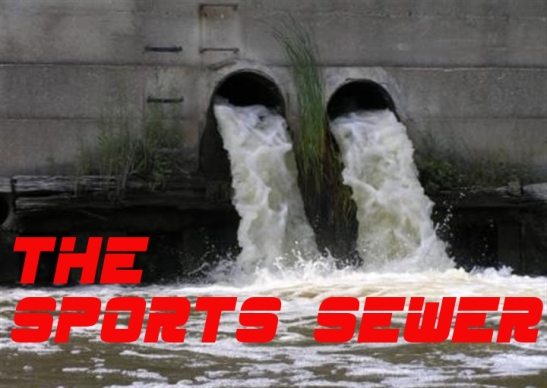 By Jason From Indiana (JFI)

I know Ed Hochuli is an NFL referee and not a member of the sports media, but there are people on ESPN who would kill to get as much face-time as this wind-bag does.  Last Monday night was a classic example.  It’s my New England Patriots vs. the Baltimore Ravens.  Tom Brady vs. Joe Flacco.  New England’s prolific offense vs. Baltimore’s #1 ranked defense.  You’d think I’d be happy to watch such a game.

Usually, if something’s going to annoy me on Monday night, it’s the drool-babblings of Jon Gruden.  But that night’s honor for ticking me off went to Ed “The Ego” Hochuli. The fact that everyone knows who he is should tell you something.  “Mr. Lawyer” on weekdays and “Over-officious Jerk” on Sundays (thank you, Marv Levy) loves to inject himself into the action for no real reason, other than because he can. Not once, but twice during this game did the phrases “Kill all the lawyers” and “Kill the umpire” pop into my head.  I know Hochuli is a referee not an umpire, but you get the point.

The first thing to tick me off was what should have been a simple false start penalty. The fact that I can’t even remember who it was on, but I do remember Ed’s unnecessary breakdown tells you all you need to know.  What should have been nothing more than “False start, number 78, 5 yard penalty, repeat second down” got “Hochuli-ed” into “The lineman was in a 3-point stance then moved his arms. That’s a false start, blah blah blah.” I’m pretty sure “Eddie The Ego” is the kind of guy who tells you how to build a watch if you ask him what time it is. 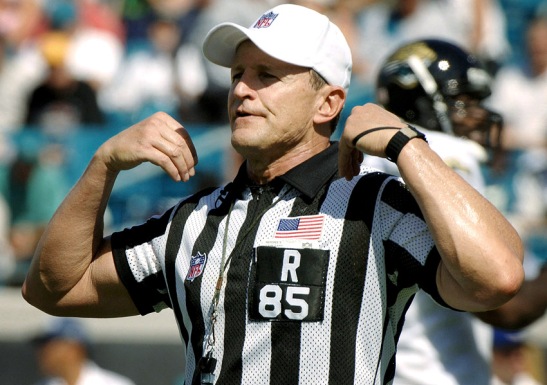 “First the earth cooled. Then the dinosaurs came and went. Then Columbus discovered America, which resulted in an illegal touch downfield, just like the first time I ever tried to unhook a girl’s bra…” This went on for four more minutes.

It gets better. Later in the game, the Patriots strip-sacked Joe Flacco, until “Eddie the Ego” rode in on his zebra to save the day for the Crows.

Since the NFL reviews all turnovers, in order to give New England the long, unlubricated variety, Eddie flips on his stadium mike and give us some crap about “The player’s forward progress was stopped, therefore the play is not challenge-able.”

In case you didn’t see it, there’s video here.

Watch that video and explain to me how does a quarterback dropping back in the pocket somehow have forward progress? Not only that, he’s getting dragged backwards.  Am I the only one who noticed the “Eddie The Ego” essentially ignored the rule as written by making up some forward progress non-sense? Isn’t this EXACTLY why the NFL Rules Committee decided to review all turn-over plays? Are you one the Rules Committee, Eddie? I didn’t think so.

Every official makes bad calls, it’s part of the game. I get that.  But this wasn’t a “bad call;” this was “Eddie the Ego” erroneously (you aren’t the only one who can use big words , Eddie) making a call where there was none to be made.  Again, isn’t this EXACTLY what instant replay is for?  So, why in the world would he make such a non-call? To screw the Patriots, obviously. I’m surprised he didn’t whip out a tire-pressure gauge and start testing footballs.

We’ve all heard Hochuli’s drawn-out explanations…like he’s arguing before the Supreme Court, which is why anybody gives a damn who he is. We  shouldn’t know that much about him or any other referee, because nobody buys a ticket to hear them.  That’s one problem.  That’s what you get when you give a lawyer a whistle.  But now, “Eddie the Ego” seems to think he’s bigger than the game by getting to make rules as he goes. “Forward progress,” my ass. That only applies to guys actually going forward.  But, even if you can’t figure that out, the rule is pretty simple, Eddie…ALL TURN-OVER PLAYS ARE REVIEWABLE. ALL OF THEM.

Now, can “Eddie the Ego” stop talking long enough for someone to get that message to him?

On a side note, don’t forget to get your nominations in for the Eighth Annual Dubsy Awards…especially the Ed Hochuli Award for the Best Call.

EDITOR’S NOTE: The views expressed here are those of JFI alone, and may not necessarily reflect those of  Dubsism.  In other words, whether you agree, disagree, or just have a hot take of your own on this topic, hit up the Comments section or send it straight to JFI at @jbhickle on Twitter or email jfisports1@gmail.com.

I tend to think outside the box and question mainstream thinking.
View all posts by JFI →

This entry was posted on December 19, 2016 by JFI in NFL, Sports and tagged Ed Hochuli, Jason from Indiana, NFL, Sports Media, The Sports Sewer.