NOTE: This installment of Sports Analogies Hidden In Classic Movies is being done as part of something called the The Second Marvellous Michael Caine Blog-A-Thon – Hosted by RealWeegieMidget Reviews. She’s a fixture in these events, and you should stay tuned for the Send In The Marines Blog-a-Thon we will be co-hosting in November!\

You can see all the participants in this blog-a-thon here:

Set during the Second World War, “Victory” is a tale of a exhibition football match between a German team and one comprised of Allied prisoners of war.  Michael Caine has the starring role as Captain John Colby, a professional footballer for West Ham United turned English Army officer.  Colby finds himself tasked with the organization and management of the POW team.

As the match is being held in occupied Paris where there is the well-organized French Resistance, Colby’s superior officers repeatedly try to convince Colby to use the match as an opportunity for an escape attempt.  Colby consistently refuses as he believes such an attempt can only get his his players killed.  As he is assembling his squad, he is introduced to Robert Hatch (played by Sylvester Stallone), an American who is serving with the Canadian Army (this movie is set before America’s involvement in the war).

Hatch is relentless in his attempts to join the team, even though Colby want nothing to do with him.  There’s a scene where Hatch, being the classic American “fish out of water” when it comes to what we Yanks call “soccer,” puts a straight-up American football tackle on somebody and Colby immediately sends him off while screaming “I WON’T HAVE THAT BLOODY AMERICAN STYLE!”

But then two things happen.  Colby comes to realize the Germans intend to use this match as a propaganda stunt; the professional Germans easily defeating the rag-tag Allied rabble sort of thing. Meanwhile, Hatch has been planning an escape attempt on his own with the support of Colby’s superiors.  Colby then gets on-board with the escape attempt, and Hatch joins the team as a trainer. That was a great idea because…well, let’s be honest…buying Stallone as a footballer is the textbook definition of “tough sell.”

In that vein, it’s much easier to buy Sly as a commando-type who can help pull off an escape plot. Conveniently enough, that’s exactly what Hatch is.  As such, the plan is that Hatch will escape from the prison camp, make his way to Paris, make contact with the French Resistance, and finalize the plans for the escape of the rest of team. After this is accomplished, Hatch then gets re-captured so he can pass this information along to Colby, his superiors, and the rest of the team.

The problem is that once Hatch is caught, he gets tossed into solitary confinement where he cannot communicate with the other prisoners.  In order to get him out, Colby tells the Germans he needs Hatch on the team because in addition to being the trainer, he’s also the back-up goalkeeper, and starting goalie has broken his arm.  The Germans call Colby’s bluff and demand proof of the injury.  Left with no choice, Colby breaks his goalie’s arm.

The football match is exactly what you would expect.  The German play dirty and the officials obviously call the game favorably for the Germans because they don’t want to get sent to the showers. During halftime, the French Resistance breaks into the POW locker room from a sewer tunnel underneath the stadium.  But some of the the POWs don’t want to leave then because they feel they can win.

In the second half, you really see this movie was a “Who’s Who” of world football in 1981.  The POW team features luminaries like Bobby Moore, Osvaldo Ardiles, and Pele…amongst others.  The German side isn’t without it’s professional footballers, the most notable being Werner Roth.

If you look at the picture below, you see a lot of greatness.  That’s really the theme in today’s hidden sports analogy.  As the “sports” guy, it shouldn’t shock anybody I picked this movie. what may shock some people is today’s hidden sports analogy isn’t necessarily hidden in this movie. Rather, “Victory” is the sporting entry in the card-catalog which represents Caine’s great range as an actor. 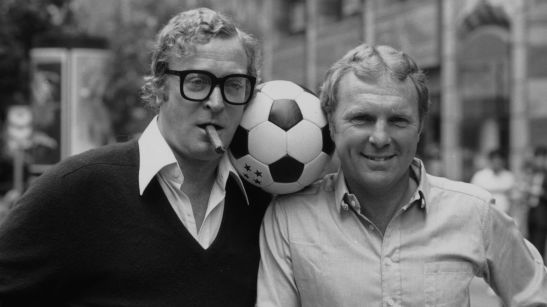 My first exposure to Caine was in another movie set during World War II, “The Eagle Has Landed.” At first Caine seemed out of part being this obviously British guy playing a German officer. But thanks to his aforementioned range, Caine pulls it off.  The next time I see him, he’s not so out of place as an obviously British guy playing a British officer in yet another WWII flick “A Bridge to Far.” While it could be argued that I’m a bit of World War II nerd, but what can’t be argued is regardless of the situation, Caine can always be counted on to deliver a performance that “knocks it out of the park.”

I know that a lot of time the movies fans who read these analogies may not understand the sports end of them.  Well, this time the analogy is going to come from a baseballer even many baseball fans may not remember.

My first exposure to Matt Stairs came back in 1996 when I lived in Minneapolis.  Then, Stairs was a young outfielder for the Oakland A’s, and I was at the ballpark the day he launched two moon-shot home runs off whatever slagheaps the Minnesota Twins were offering as pitchers in those dark days of Dome-ball.

Both of those shots arced majestically into the upper deck in right field and right into my heart. I was hooked; Matt Stairs became my first fantasy baseball man-crush.

I saw all I needed to see that afternoon in the Metrodome. Stairs had all the hallmarks of a 30-homer, 100-RBI guy.  But he didn’t look like your classic leftie slugger.  He was only 5’9” and stocky, and he didn’t have that beautiful, smooth stroke most good left-handed hitters have. I didn’t care. His upper-cut swing was a thing of beauty to me.

You can ask pretty much ask any classic movie buff to name their favorite actor, and more often then not they are going pretty far down that list before they get to Caine.  I love his work, but he’s not even on my list. You can pretty much ask any baseball fan to name their favorite player, and with the exception of his family, nobody is going to say Matt Stairs. this because neither or Caine or Stairs were glamorous or flashy; they just delivered a massive performance at precisely the moment you needed it.

“Victory” is a classic example for Caine.  At the moment the Germans aren’t buying his “goalie broke his arm” story, the entire escape plan is in serious jeopardy. Caine simply steps up to the plate and comes up with a “big hit” of his own to keep the mission alive. Matt Stairs made a career out of delivering bone-crushing power when it was needed.

When Michael Caine won a Golden Globe award for “Little Voices,” he said “you have to make a lot of crap in order to do things you want to do.” When he was asked not being able to attend the Oscars when he won Best Supporting Actor for “Hannah and Her Sisters” because he was on location filming the uber-shitty “Jaws: The Revenge,” he said “I have never seen it, but by all accounts it is terrible. However, I have seen the house that it built, and it is terrific.”

The type of humility that allows a guy with “Oscar” talent to not care about stardom is the same that makes a guy who can rip the cover off a major-league fastball with the best off them happy being a “have bat, will travel” journeyman.  For both Caine and Stairs, it was all about staying in the game and perfecting their craft.

For Caine, that meant two Academy Awards and a shelf full of others, a knighthood, and apparently a pretty nice house to keep all that stuff.  For Stairs, he ended playing for 13 different major-league teams and totaled more pinch-hit home runs than anybody in the history of the game; the most famous likely being the one in the 2008 National League Championship Series that helped launch the Philadelphia Phillies into the World Series.

As a life-long hater of the Los Angeles Dodgers, that moment was pure manna from heaven.  I bet it helped Stairs buy a pretty nice house too.