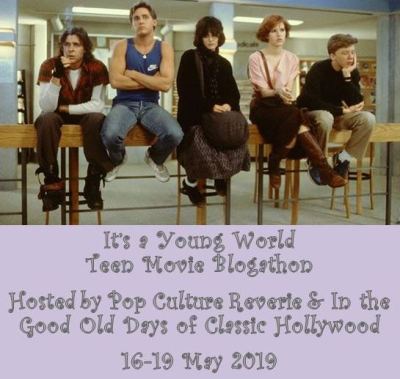 NOTE: This installment of Sports Analogies Hidden In Classic Movies is being done as part of something called the The Young World: Teen Movie Blog-a-Thon, which is being hosted by Pop Culture Reverie and In The Good Old Days Of Classic Hollywood. This post is the front end of a “Blog Double-Header” with a “Cops and Robbers”  theme.  The back end is the “Cops Blog-A-Thon” being hosted on Dubsism this weekend.

To see all the contributors to this blog-a-thon:

Normally, when you think of a “Teen” movie, one pictures some sort of light-hearted comedic romp.  The title of this movie also gets it confused with a 1995 Will Smith/Martin Lawrence formulaic “buddy-cop” snoozer.  Trust me, this film is neither boring or funny. Rather, it is a “sausage being made” look into the juvenile criminal justice system.

“Bad Boys” revolves around the rise in the criminal world of Mick O’Brien (played by Sean Penn).  At the film’s outset, Mick is a 16-year-old Chicago street thug who graduates from small-change stuff like getting into brawls, petty vandalism, and snatching purses.  But he has larger aspirations, so he plots with his best friend and partner-in-crime Carl (played by Alan Ruck) to rip-off a rival named Paco Moreno (played by Esai Morales).

A monument to Murphy’s Law ensues; everything that can go wrong does. Carl gets killed, the police get involved, and while in a high-speed chase fleeing from the cops, Mick runs over and kills Paco’s eight-year old brother. As a result, Mick is sent to a juvenile correctional facility, which is “rose by any other name” for “maximum security prison for teen-agers.”

Here, Mick befriends Barry Horowitz (played by Eric Gurry).  At first glimpse, Barry looks completely out of place in a place for violent, predicate felons, until you realize this nerdy little “brainiac” fire-bombed a bowling alley in retaliation for a beating he got for flirting with some other guys’ girlfriends.

Mick and Barry’s cell block is run by resident uber-bullies “Viking” (played by Clancy Brown) and “Tweety” (played by Robert Lee Rush).  It takes no time at all for tension, to develop; Viking and Tweety take an immediate dislike to Mick.  Matters come to a head when Mick witnesses Tweety kill another inmate by throwing him off a catwalk after that inmate tried to stab Tweety in revenge for brutally raping him.  When Viking and Tweety enter Mick’s cell to silence him over that murder, Mick savagely beats them with a pillow case filled with soda cans.

In turn, this makes Mick the new “barn boss,” meaning he’s the inmate the guards know intimidates the other inmates, so he gets to hand out the work assignments.  Naturally, Viking and Tweety get “shithouse patrol,” meaning they get to scrub toilets.

Meanwhile on the outside, to gain revenge for the death of his brother, Paco rapes Mick’s girlfriend J.C. (played by Ally Sheedy). When Mick hears of the rape, he breaks out as he is desperate to see J.C.  He is quickly recaptured, but in short order Paco is arrested and sentenced to the same cell block which houses Mick.  While the problem presented by confining Mick and Paco together is no secret, there is simply no other place to put a violent felon like Paco.

Thirsty for revenge against Mick himself, Paco continually goads Mick into a confrontation; one Mick keeps avoiding as he is eligible for early release, but only if he maintains “good behavior.”  Naturally, in the prison world, Mick’s refusal to fight is seen as “weakness,” and being seen as “weak” threatens his status as “barn boss.” Events accelerate when other accommodations are found for Paco. The final showdown occurs when Paco attacks Mick, but Mick is the victor, dragging Paco in front of the guards.

There are two places on this earth where you will find a “barn boss;” a prison and a football locker room.  There’s one pre-requisite for being a “barn boss.”  You have to be the toughest guy in the room…and everybody has to know it. We get to see Mick O”Brien’s artistry with pillow case and soda can as his ascent.  We never got to see what made Tarik Glenn the “barn boss” of the Indianapolis Colts, but he sure as shit was the unquestioned ruler of that locker room.

We know this from a sideline incident a few years back.  We find out quickly who’s the boss in a dispute between fan favorite center Jeff Saturday and future Hall-of-Fame quarterback Peyton Manning.  Keep your eyes on the man-mountain wearing #78 who intervenes with the command “GO SIT DOWN!”

It is a popular, albeit false assumption that the star quarterback is the leader of a football team.  A football team can only be successful when it functions as cohesive unit, and more often than not, the guy on the field responsible for that is the quarterback.  But in the locker room, that’s the sole responsibility of the “barn boss.” Most people never see this in action, because like a maximum security prison, they’ve never been in a football locker room.

That’s why scenes like the one above are rare on the sidelines, such rancor is usually reserved for the locker room.  But once Saturday and Manning spilled “family business” on the sideline, it was “barn boss” Tarik Glenn who backed down the star quarterback and restored order tout dé suite.