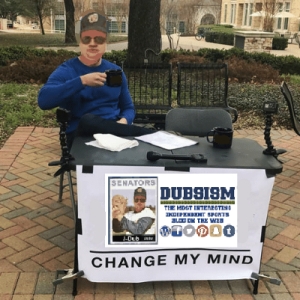 The Argument: On the last Sunday of this most recent NFL regular season, the Tampa Bay Buccaneers Jameis Winston achieved an ignominious distinction when he became the first quarterback in NFL history to throw for 30 touchdowns and 30 interceptions in a single season.  If that weren’t enough, he also became the first to chuck seven interceptions returned for touchdowns.  In all honesty, the fact he pulled that off isn’t nearly as entertaining as how he did it.  It was so perfectly a microcosm of Winston’s NFL career that a Pulitzer-prize winning author couldn’t have concocted it.

Coming into that final game, Winston had already tossed 31 touchdown passes, but he still was two interceptions away from 30 and one “pick-six” shy of breaking a tie with Rudy Bukich and Peyton Manning, who both threw six touchdowns the wrong way in a season.

Winston waited until near the end of the second quarter before he chucked his first pick of the day when he forced a ball into the seam and the Atlanta Falcons’ Ricardo Allen helped himself to a free football. But the history-making moment would have to wait for overtime. On the very first play from scrimmage in the extra stanza, Winston did the most “Winstony” thing he could when he threw late over the middle and Deion Jones snagged the ball and was off to the house.

Thus was cemented the legend of Jamies Winston.  I’ve long been on record as being critical of “CrabLegs McPickSix,” but my blog brother from another mother SportsChump is a long suffering Buccaneers fan, and he has shown his angst over his quarterback.

The problem is the Buccaneers have a decision  to make on Winston as he is set to become an unrestricted free agent this off-season.  The bottom line is they have three choices.  The Buccaneers can re-sign Winston to a mutli-year deal; he’s already made noise he wants in the neighborhood of $30 million per year.  They can use the dreaded “franchise tag,” which keep him a Buccaneer for one year at the average of the top five quarterback salaries in the league or 120 percent of his previous salary, whichever is greater. Or they can simply be done and let him sign somewhere else.

Here’s why this tortures the SportsChumps of the world. One the one hand, in his first season under head coach Bruce Arians, Winston totaled 5,109 passing yards (the eighth-most in NFL history) and 33 touchdowns.  There are NFL teams which would die to have those numbers, but it’s the 30 interceptions (the most in the league in 40 years) and the seven “pick-sixes” that killed the Buccaneers.

To me, that makes this an easy decision.  Football is a game of possessions; each team gets somewhere between 10 to 13 per game on average.  That’s why turnovers are a killer in the NFL, and when a team has a quarterback who gives away 30 of them in a season, seven of them leading to instant points, that team simply cannot win on a consistent enough basis to win a championship. Make no mistake, the goal of every NFL team is to win the Super Bowl, and if the quarterback is more of a hindrance than a help, why dump money into him?

That’s why I think paying Jameis Winston is merely doing this.

This entry was posted on January 28, 2020 by J-Dub in NFL, Sports and tagged Change My Mind, Jameis Winston, NFL, Tampa Bay Buccaneers.