In Honor of Steve Sarkisian’s Hiring at USC, It’s Time To Raid The Dubsism Archives 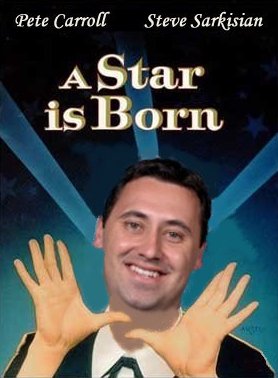 If you aren’t familiar with the 1954 film classic “A Star Is Born” starring Judy Garland and James Mason, then the jokes here are going to be completely lost on you. But rather than telling you to move along, you may want to consider giving the following movie parody a read, because it was written four years ago and essentially predicts Sarkisian’s rise to the top.  It stars all the same characters; Sarkisian as Esther Blodgett/Vicki Lester, former USC head coach Pete Carroll as Norman Maine, and who could forget the recently departed Ed Orgeron as Matt Libby?

Having said that, here’s the Dubsism version of “A Star Is Born.”