For purposes of clarity, this all starts last year around this time when we find ourselves heading into the NCAA Tournament.  I’m one of the first guys getting on the Frank Kaminsky bandwagon even then.  The following is from an article posted on March 17th of last year.

A relative unknown outside of the B1G Ten, Badger center Frank Kaminsky is a seven-footer who can beat you in the low-post, or can three-pointers at a 40% clip. Like a lot of “bigs,” he tends to get into foul trouble, and wears down when played too many minutes, but with proper game management and creating the right match-ups, Kaminsky can dominate anybody in the college game.

Granted, I first spotted this guy when in November of 2013 he set the Wisconsin school record for points in a single game when he hung 43 on my alma mater North Dakota.  Obviously, that’s not exactly a basketball powerhouse, but it was clear this guy could play.

North Dakota is a hockey school, but even with sticks they couldn’t have stopped Kaminsky.

Since then, I developed a full-on college basketball man-crush on Kaminsky. If you aren’t familiar with the concept of the “man-crush,” I’ve explained it before, because non-sports fans may not understand. Also since then, I came to the belief that Kaminsky’s skill set could play a pivotal role in the rebuilding of my beloved Los Angeles Lakers.  There was a comment on that piece stating that Kaminsky was little more than a stretch version of former B1G Ten hero Robbie Hummel.  There were stats to back up this commenter’s claim, but the funny thing about statistics is they are always a great indicator of past performance, but they aren’t always as accurate for predicting future performance, especially in 20-year-old kids.

Before Kaminsky’s senior season this was the stat line quoted to me:

Then, you look at this season’s numbers, and while you are digesting these, keep in mind the season is not yet complete.

Also keep the following two facts in mind. That first stat line comprises Kaminsky’s first three seasons at Wisconsin, the second is just this year. Secondly, don’t forget that Kaminsky is the only player in Division I Basketball leading his team in scoring, offensive and defensive rebounds, assists, steals, and blocked shots.

What it boils down to is Kaminsky really should be a lock to be the B1G Ten Player of the Year. Just look At the possibilities.

In most years, Indiana’s Yogi Ferrell would be able to lay a solid claim to such a title.  His 16.2 points and 5 assists per game has helped keep Indiana relevant in the conference for this long.  Ferrell likely ends up as 2nd or 3rd-team All-American.

Iowa’s Aaron White has been one of the most efficient bigs in all of college basketball this season.   Purdue’s A.J. Hammonds has been dominant in conference play over the last six weeks, and he’s a major reason why the Boilers look to be in the Big Dance for the first time in five years. Melo Trimble has been inconsistent for Maryland, but when he’s on, there isn’t a more electric player in the conference. Denzel Valentine is a key factor making Michigan State the only team with a shot to split the B1g Ten regular-season title with Wisconsin. Penn State’s D.J. Newbill is the best pure scorer in the league, and all of this could have been different had Michigan’s Caris LeVert not been injured.

Russell is a freshman on a Ohio State team which has found itself largely overmatched in the conference, yet they still may find themselves in the Tournament. Kaminsky is a senior whose Badgers have a deep roster which may well find itself as a #1 on Selection Sunday.

Russell is not getting the attention Kaminsky is, despite the numbers he’s posting.  The Buckeye frosh is averaging 19 points, 5.8 rebounds and 5.4 assists per game.  Not only that, but he’s doing so knowing full well he is the sole target of every opposing defense every night.  Kaminsky is posting his gaudy numbers while having top-quality players like Sam Dekker and Nigel Hayes alongside.
So, why shouldKaminsky get the nod over Russell? BecauseKaminsky has undeniably been the most versatile player in college basketball.  If you need a guy to can a clutch three-pointer,Kaminsky’s knocking down 3’s at a 41% clip. If you need a score from the block,Kaminsky has a full complement of low-post moves, all capped with a nearly unstoppable baby hook.  On the defensive end,Kaminsky is both a shot-blocker and a formidablerebounder. He can guard wings, and can switch up when needed.  What it comes down to is that as a college basketball player, there may not be anythingKaminsky can’t do.

The uber-nerdy numbers seal the case for Kaminsky, and are what I will take to the bank on my assertion that Kaminsky is a “can’t miss” NBA prospect.  Kaminsky is scoring 17.7 points and grabbing 8.3 rebounds, has a 62.6 “true-shooting”percentage, a 26.6 defensive rebounding rate, an 18.7 assist rate, and miniscule 9.2 turnover rate. If you chunk that all together, you get the basketball answer to baseball’s Sabremetrics. 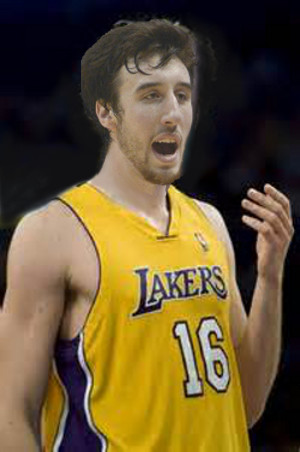 Yes, I still want Kaminsky as a Laker, and I’m sticking to that.

If you want the heavy-duty math as to how it is calculated, the formula works like this (From Basketball Reference)

Before you break out the slide-rule, all you need to know is that Kaminsky leads the nation in PER at 34.0. The only other pertinent fact here is there have only ever been two other players to lead the nation in PER despite playing in a major conference? Those were Anthony Davis and DeMarcus Cousins.  I’m pretty sure both of those guys are doing just fine in the NBA.

So, before you try to throw my own assessment on the usefulness of statistics against me, stop to consider all things that made those numbers possible. Kaminsky grew into being a dominant college player, and all signs point to him only getting better. I know there’s no guarantee Kaminsky produces at the next level, but I’m more willing to bet on him as a Los Angeles Laker tmore than any other big this upcoming draft.