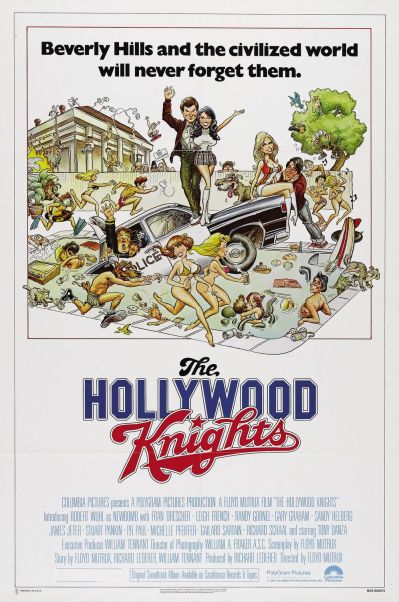 NOTE: This installment of Sports Analogies Hidden In Classic Movies is not being done as part of a blog-a-thon.  Instead, this is a monthly event hosted by MovieRob called Genre Grandeur.  The way it works is every month MovieRob chooses a film blogger to pick a topic and a movie to write about, then also picks a movie for MovieRob to review.  At the end of the month, MovieRob posts the reviews of all the participants.

For October of 2019, the honor of being the “guest picker” went to Amanda of Hollywood Consumer. The topic is “Los Angeles Movies.” Not only does my choice fit the theme, but it also takes place on Halloween.

Set in Hollywood, in 1965, “The Hollywood Knights” is the classic American “Teen” comedy, the plot of which revolves around a group of high school pranksters who have a 1950s-type car club. The main thrust of the film comes from the fact that a cadre of upper-crust Beverly Hills types are shutting down the club’s primary hangout, Tubby’s Drive-In. As such, combining that conflict between the car club and the local gentry with the aforementioned Halloween night setting, trickery abounds throughout this film.

Led by the irascible Newbomb Turk (played by Robert Wuhl), the Hollywood Knights engage in a night-long cavalcade of pranksterism. The targets range from the expected members of the community who intend to replace Tubby’s with an office building, the two “Keystone Kops”-type police officers charged with keeping the Knights in line on their last night in Beverly Hills, the disruption of a high-school pep rally, and the exploits of four new members to the car club who as part of their imitation are left butt-naked in Watts with a mission to carry tires to a local radio station and get the disc jockey (played by Wolfman Jack) to play a song request and make an announcement about the closing of Tubby’s Drive In.

Along the way, we are treated to comic antics such as a not-so-discreet affair between two of the movers behind the closure of Tubby’s, various bumbling by the predictably clownish cops, a punch bowl being “spiked” with urine, panty-less cheerleaders, a sexual encounter capped with a premature ejaculation joke, with the signature prank being Newbomb Turk in a hijacked drum major outfit performing a fart-based version of “Volare.”

Of course, this is all intercut with several drag races…after all, it is about a car club. But the thing most first time viewers of this movie will come away with is the sheer amount of bare ass they see. Not only do you have the aforementioned naked club pledges and the panty-less cheerleader, “mooning” plays a major role in this film’s hi-jinx. In fact, there is so much bare ass in this movie that one of the advertising slogans promoting it referenced the Apollo space program as “The Hollywood Knights was the first movie ‘to moon a man on the land.'”

Despite all that, this movie is full of familiar faces besides Robert Wuhl; there’s also Tony Danza, Fran Drescher, and Michelle Pfieffer all making their big-screen debuts.

Even if you are a first-time visitor to Dubsism, the header of this section should tell you I am a massive fan of all things sport. Of all the sports I watch, baseball is my favorite, and today’s analogy comes in the form of one of my favorite players. At first glance, most people might not see the similarities between Robert Wuhl’s “Newbomb Turk,” the film “The Hollywood Knights” itself, and Hall-of-Fame pitcher Bert Blyleven, but believe me…they are there.

As for Newbomb and Blyleven, they both share a monstrously sophomoric, but hilarious sense of humor. Obviously, Newbomb Turk was a prankster, but so was Bert Blyleven. To me, the best example of this came in 1986 when Blyleven was a member of the Minnesota Twins. Moments before rookie manager Tom Kelly was set to skipper his first game, Blyleven set Kelly’s shoelaces on fire.

Not to mention…just look at Bert Blyleven’s t-shirt. Don’t tell me he wouldn’t harbor an appreciation for Newbomb’s rendition of “Volare.” As for the movie itself and Bert Blyleven, while their shared sophomoric stylings are impossible to deny, they were both surprisingly good. The job of a comedy is to make you laugh, and even if they are decidely low-brow, this movie has more than it’s fair share of full-on, head back, mouth-open belly laughs.

Likewise, The job of a pitcher is to get batters out, and Blyleven did that..to the tune of 3,701 strikeouts (3rd all-time when he retired) and 60 complete game shutouts (a number today’s pitchers will never get near).

“The Hollywood Knights” and Bert Blyleven both enjoyed a “cult” following. Most fans of this movie (myself included) came to know it as teen-agers from sneaking peeks at “R” rated HBO in 1980. To that end, Bert Blyleven never pitched for “big market” clubs like the New York Yankees or the Los Angeles Dodgers. Instead, Blyleven plied his trade for team like the Minnesota Twins, Pittsburgh Pirates, Cleveland Indians, Texas Rangers, and the California Angels. But the baseball fans in those places got to see what may arguably be the best curveball the game has ever seen.

All that leads to our last point.  Both “The Hollywood Knights” and Bert Blyleven were under-appreciated. Sure, as decidedly “low-brow” and juvenile as it is, “The Hollywood Knights” is honest-to-goodness funny…if you can appreciate it for what it is. Not to mention, it tends to get overshadowed because the era in which it was made. Think about it…how many great comedies were made between 1974 and 1984?

If you watch this movie this movie and don’t laugh out loud at least once, you either have a pathological sense of humor deficit or you haven’t drawn a breath in at least six months. As far as baseball is concerned, when most people think of dominant strikeout pitchers, they go right to the guys with the blazing fastball. In Bert Blyleven’s time, that meant guys like Tom Seaver, Steve Carlton, and the grand-daddy of them all, Nolan Ryan. But when Blyleven’s curveball was at it’s tightest, it may very well have been the most unhittable pitch of all. Despite all that, it took far too long for Blyleven to be inducted into the Hall of Fame.

Be it a screwball teen comedy or a “nose to toes” curveball pitcher, greatness isn’t reserved for the conventional.