So, another episode of March Madness is in the books.  Duke captured it’s fifth championship (barf), the Wisconsin Badgers became America’s Team (both from their fun style of  play on the floor and their cheeky nature in post-game press conferences), and we all came to love the father-and-son Hunter combo from Georgia Southern.

It’s also stories like that which make March Madness the cultural phenomena it has become. It’s also those stories which keep most of us from shooting ourselves in the face once our brackets look like an episode of “Why Planes Crash.”

“Thank you for flying Gonzaga Airlines…Non-Stop service to Kingdom Come via a cornfield 600 miles from your destination.”

That brings me to the results of the Dubsism / Dr. Brackett College Basketball Bracket Challenge. If you recall, the goal of said challenge was to finish ahead of professional sports guru and author of the most dynamic independent sports and entertainment blog on the web.  If you also recall, after the first weekend it appeared that J-Dub was going to be a force to reckon with; that maybe only a handful of those with the cojoñes to take the damn challenge in the first place could measure up. That became clear if you looked at the standings after the first weekend coupled with the biggest hole each bracket had heading into the Sweet Sixteen:

It gets even better when you stop to consider what the Dubsism readers thought about these brackets chances of success.

Two things to know about the poll results. First, they had to be corrected after a deliberate (and completely expected) attempt by Matt Lawton Hero to the AAC to stuff the ballot box in his favor.  we here at Dubsism would like to wish Mr. Lawton great success in his obvious future in Chicago politics. The other thing to notice from both the early standings and the poll results is that Lawton, Drunk Irish Stereotype, and (gasp) Mrs. Dubs all defied the odds and popular opinion to finish as winners in the Challenge.

Without further adieu, here’s how the final standings shook out: 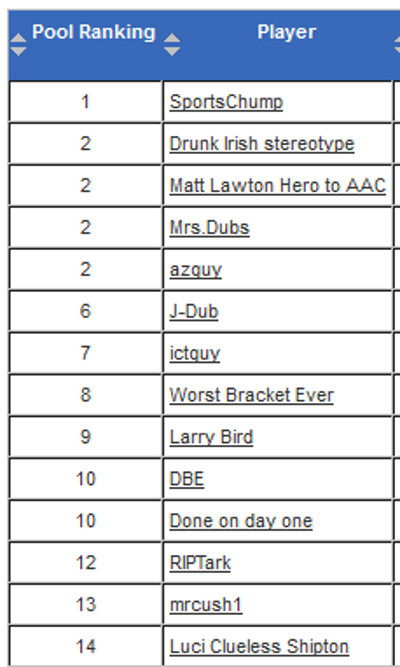 Thirteen people took the challenge, and five succeeded.  The positives which I can take from such a mediocre performance are few, but I’m claiming them anyway,  goddamnit.

First, it took another blogger to win this thing outright.  SportsChump and I were actually born on the exact same day mere hours apart; a fact that should completely destroy any semblance of credibility in that astrology shit.  Dubsism has pumped five years of eclectic sports content, yet somehow the Chump wins  “Blog of the Year” awards for writing of a similar quality to Planned Parenthood brochures.  To be fair, Chump and I  did an awesome (and timely for this week) podcast a few years back about what its like to be on the grounds at Augusta for The Masters. To be even more fair, there’s a reason why it took my involvement to produce the most interesting thing SportsChump has ever produced that wasn’t a kidney stone that looked exactly like Chester A. Arthur.

Another fun fact about this challenge is that it featured as many seven-footers as any team in this tournament, and “Drunk Irish Stereotype” was one of them. He’s also the largest Philadelphia Eagles fan I’ve ever seen that has yet to need one of those powered wheelchairs.  But as an Eagles fan like myself, he’s simply not used to this level of victory. You can almost hear the celebratory vomiting from here.

I’ve already mentioned Matt Lawton Hero to the AAC, but one thing which needs to me mentioned about him…It’s for the good of America if he ends up on Kim Jong Un’s hit list.

AZguy is actually Mrs. Dubs’ uncle, which makes him one of the few in-laws with whom I’m still on speaking terms.  That can only mean there hasn’t yet been enough familiarity on which to breed the proverbial contempt.

That brings us to Mrs. Dubs.  If you look at the early standings and the opinions of the Dubsists, nobody thought she was going anywhere. But guess what? She was the only player in this challenge who still had a shot to capture the lead on Monday night. Had Michigan State beat Duke on Saturday, she would have won regardless of what happened on Monday.  Had Wisconsin beat Duke, she would have won outright.

Now, that’s not a real picture of Mrs. Dubs. For one thing, the mouth isn’t nearly big enough. Secondly, it suggests a familiarity with kitchen utensils.  Not to mention that robe is far too clean.

Right now, I know all you married guys are cringing at the trouble I could get in for saying this kind of shit about my own wife, but I know I’ve got nothing to worry about. Mrs. Dubs tells me all the time that she reads this blog; a lie right up there with “the check is in the mail.” Even if she does see this, her degree in English Literature from West Lafayette Adult Education and Tire Care Center means she probably has a “Floyd Mayweather” literacy level.

As for the rest of you…well, you lost.  There’s no reason to talk about you. That’s what you want to keep in mind for next year; your reward for winning the Dubsism /Dr. Brackett College Basketball Bracket Challenge is getting stabbed in back.

At least it doesn’t cost anything.