I need to start this with my usual disclaimer for each time I write about Purdue athletics;  I’m not a Purdue fan, nor am I an alum, but I live in the heart of Boiler Nation and I’m married into a family with hefty Purdue roots. My interest in Purdue athletics is simple; if I’m going to see the local team in my media package everyday, it would be nice if they didn’t suck.

As the recent firing of Darrell Hazell exemplifies, this cannot be said about Boilermaker football.  There could be a serious debate about which program features the worst “Power 5” football; we can talk about Rutgers, Kansas, or even Virginia.  But there’s no denying that list is not complete without the mention of Purdue.

In much the same manner as we’ve just navigated a historic election, this is your opportunity to effect a similar turning point in the history of Purdue football.  A while back, I wrote about this topic with the point being to stay “realistic” in the choice for the new face of the Boiler football program.  When I’m not being a painfully amateurish blogger, I’ve had a career in management longer than I’d care to admit. I mention that only because one of my biggest “pet peeves” as a leader of people is when those same people point out problems without offering solutions.  While I have pointed out the idea that guys like Les Miles are not within Purdue’s grasp, there are several coaches out there who I am convinced should merit serious consideration. 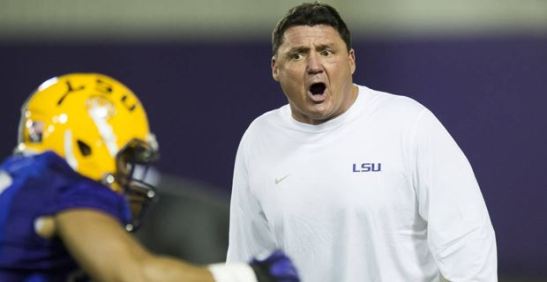 After yesterday’s crushing loss to Florida, there’s almost no way LSU takes the interim tag off “Coach O.” That’s because they still think they can lure somebody like Florida State’s Jimbo Fisher.  That will be to their loss because Ed Orgeron has proved his value as a leader, a coach, and a recruiter.  He was a major part of Pete Carroll’s success at USC, and resurrected that team later after Lane Kiffin’s firing in 2013. He’s also played a major role in keeping LSU relevant after the losses to Wisconsin and Auburn which got Les Miles fired in the first place.

The obvious question on Orgeron is why didn’t USC keep him as a head coach considering how well the team responded to him? Part of the reason is the same as LSU; he lacks “star power.” Another reason is many athletic directors are afraid of him because he is the exact opposite of “politically correct” and he has a reputation for being a bit of an “Incredible Hulk” type guy.  This all stems from an incident during his time as Mississippi’s head coach.

As far as the Coach’s motivational techniques, for me the legend was born at Ole Miss when in a single team meeting, he called every player with an earring a “fucking pussy girl,” referred to the Cotton Bowl as “bullshit,” then the Coach culminated the meeting by ripping off his shirt and challenging “motherfucker” in the room to a fight.

As I said, there are too many AD’s who don’t have the guts to hire a guy like that, but there’s bunch of reasons why you should embrace this guy.

First of all, despite eight years of Obama’s deliberate “wimping” of this country, this is what football coaches do. In sports, “political correctness” is simply the noise made by losers.  Fans only care about wins and losses on the field despite all the hand-wringing places like ESPN do about off-field issues. Everybody always said what a “nice guy” Darrell Hazell was.  What’s that old saying about nice guys and where they finish?

Second,  Coach O’s time at Ole Miss was the learning experience he needed to learn the difference between being an assistant and the head coach.  His interim stints at both USC and LSU proved that.  Some of his antics in Oxford obscured his real strengths, but that was never a problem under the bright Hollywood light at USC. That’s also what allowed his greatest asset to show through.

Not to mention…can you imagine this guy in a Bob Rohrman car ad?

Johnson is an innovator and a proven winner.  He built his version of the triple-option offense which has powered him to 12 straight bowl appearances at Navy and Georgia Tech, 3 ACC division titles, and one ACC overall title.  I understand Johnson is seen as a bit of an anachronism because of his run-based offense, but it works.  With a little bit of recruiting, that offense could revolutionize the B1G Ten just like Joe Tiller’s “basketball on turf” approach did 20 years ago.

His buy-out on his current contract is only $750,000 if he accepts another coaching position, and he’s getting only slightly more per season than was Hazell.  But, Mr. Bobinski, you would know the detail of that contract extension; you’re the one who negotiated it with him in 2014.  Not to mention, you made the move from Atlanta to West Lafayette; who better to convince Johnson such a move is right for him as well? 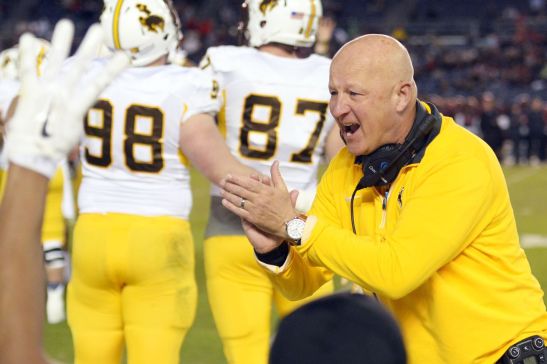 The bottom line: this guy knows about winning, and more importantly, he knows about building a winning culture.  He built the North Dakota State football program into the 5-time defending champion FCS juggernaut that it is now, and the Bison won two of those titles after Bohl left for Laramie.  That’s about culture.  He’s also taken a Wyoming team which was 2-10 last season to an 8-3 squad with signature wins over Northern Illinois, Boise State, and San Diego State.

Not to mention, Purdue has had pretty good luck with coaches from Wyoming.

4) Bret Bielema, Arkansas (only if he gets fired) 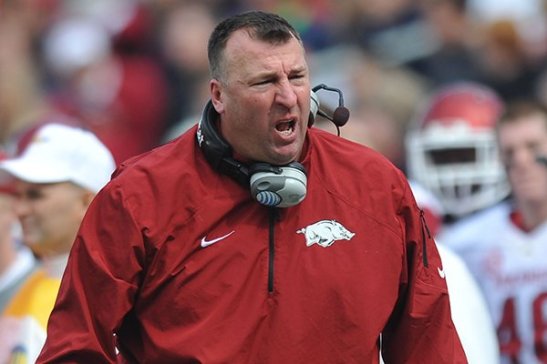 I’ve always been a Bielema fan, but that isn’t enough for me to buy out his contract.  SEC teams, especially Arkansas, have a long history of giving coaches big contract extensions, then handing them their heads. Bielema’s current deal runs through the 2020 season, with an average annual total compensation of $4.25 million.  There’s also athletic and academic achievement incentives totaling up to $1 million per year.  I’m not buying that out, so if he gets fired after this season (and there’s rumbles to that effect), I’d be interested.  Arkansas fans still think this is 1969, and that the Hogs should be a pre-eminent program.  They aren’t, they won’t be for a while, and if Bielema isn’t be given enough time to change that, I’d be happy to see a return of “Sausage-Fed Godzilla” to the B1G Ten

5) Kliff Kingsbury, Texas Tech (only if he gets fired)

You’re going to ask why am I interested in another guy who is about to get fired.  Kingsbury failed in Lubbock; a place where nobody could succeed.  Texas Tech has the same problem as does Kansas; when you fire a damn good coach over some politically correct bullshit, the football gods curse your program.  There’s a reason why the Jayhawks have been circling the college football drain since they ran Mark Mangino out of town, and Red Raider Nation need only look at it’s dismissal of Mike Leach to understand it’s current woes.

You would think given Texas Tech current dismal state coupled with a program-ending 66-10 seal-clubbing at the hands of crap-tacular Iowa State would mean the end is near for the coaching tenure of Texas Tech’s most storied quarterback.  But then there’s the matter of his contract.  Kingsbury got the sweetest of all sweetheart deals two years ago when he signed a contract worth a potential $22.9 million dollars and a guaranteed $17.1 million, of which over $9 million remains to be paid.  Obviously, there’s no way I’m touching that contract.

Having said all that, the question still stands as to why would I want this guy to the Boilermakers’ next head coach?  Purdue has spent millions marketing that “Cradle of Quarterbacks” campaign, so why not hire a guy who held pretty much every NCAA passing record worth having?

Besides these nominees, there are two points to consider.  Darrell Hazell’s titanic failure means guys from small programs who have built success are much less likely to leave those programs now that we are in an era where the gap between the top of the “little guys” and the bottom of the “Power 5” isn’t that appreciable.  That means guys like P.J. Fleck at Western Michigan who just got College GameDay to come to Kalamazoo can easily build a successful program where they are rather than moving on to clean up somebody else’s train wreck and getting three short years to do it.

The other issue to consider here is timing.  After yesterday’s debacles, coaches like Charlie Strong at Texas and Brian Kelly at Notre Dame could be getting fired as I write this.  Subsequent to that, there will be plenty of head-coaching jobs coming open over the next few weeks, and considering Purdue’s current situation, it might not be a bad idea to get a headstart on the coming game of “Coaches’  Musical Chairs.”